Mary Barrett Dyer was an American pioneer, city co-founder, Puritan and Antinomian Bible study leader, Quaker activist, wife, mother, expelled from Massachusetts Colony numerous times, was twice taken bound to the scaffold, and finally executed by hanging for civil disobedience--NOT for "being a Quaker," as many websites declare. A memorial statue of Mary is located at the Massachusetts State House facing the Boston Common.

.....June 1625 William apprenticed at age 16 as fishmonger in London, retroactive to 1624. The Worshipful Company of Fishmongers guild was considered prestigious.
.....27 Oct 1633 After his 9 years of apprenticeship, Mary Barrett (approx age 22) marries William Dyer at St Martin-in-the-Fields church, London. William is milliner selling scabbards, leather goods, etc. in New Exchange (a high-end shopping mall on the Strand). This is less than a mile from St Martin-in-the-Fields church, in which parish they lived.
.....24 Oct 1634 Son William born/baptized in London, buried three days later on his parents' first wedding anniversary. This 11th-12th century church was rebuilt to its present form in the 18th century. However, the marble baptismal font and a wooden trunk from 17th century survive to the present. At the time of the baby's burial, the relatively-new churchyard cemetery was across St. Martin's Lane to the west, where the National Gallery sits.

.....1635 summer. 39,000 people die in plague epidemic in London. William and Mary Dyer emigrate to New England, perhaps arriving in October.
.....20 Dec 1635 Son Samuel born and baptized (December) in Boston.
.....3 Mar 1636 William takes Freeman oath in Boston.
.....1636 William granted land in Chelsea, Massachusetts.
.....1636 Mary joins Anne Marbury Hutchinson (whom William’s family probably knew in Lincolnshire) in “heresy” that God speaks intimately to people (“Light”), that we are saved by faith not good works, that Christians are not bound by the moral law (antinomianism), that women and men are equal before God, that each individual should interpret law by own conscience, that Indian slavery was wrong (against Massachusetts Bay Company policy); Mary participates in women’s study/discussion groups, antagonizing Gov Winthrop.
.....17 Oct 1637 Mary gave birth to stillborn, deformed girl, two months prematurely. Anne Hutchinson and Jane Hawkins are midwives. Based on Winthrop’s description, fetus had anencephaly and spina bifida malformations, according to a neurologist.
.....15 Nov 1637 William and many other men disarmed and disfranchised from Boston for “seditious writing.”
.....1638 Dyers and Hutchinsons banished from Boston, have deadline of May 1 to be out of Boston. They move in early April, near the time of Passover and Easter, to found Portsmouth, Rhode Island, which at first is called Pocasset, an Indian name.
.....Mar 1638 In March at Hutchinson's trial, Gov Winthrop learns of stillbirth. "Monster" fetus exhumed by Gov Winthrop; deformity called evidence that Mary was heretic.
.....7 Mar 1638 William signs Portsmouth Compact. Becomes clerk of Portsmouth; a few years later, William becomes Rhode Island's first Secretary of State.
.....March 1639 Dyers move to southern part of Aquidneck Island and co-found Newport.
.....1640 Son William (second child by that name) born in Newport, Rhode Island.
.....1642 and 1644 Governor Winthrop’s account of stillborn baby’s deformation published in England.
.....1643 Son Mahershallalhashbaz born Newport, Rhode Island
.....1647 Son Henry born Newport, Rhode Island
.....1648 or 1649 Daughter Mary born Newport, Rhode Island.
.....1650 William is Attorney General of Rhode Island, the first to hold that office anywhere in America.
.....1650 Son Charles born Newport, Rhode Island. He is Mary’s last child at about age 39-40.
.....1650 and/or 51 William sails to England with Roger Williams, to revoke some of Gov Coddington’s powers. William Dyer returns same year and continues political and civil career. He probably returned to England briefly in late 1651 or early 1652.
.....1652 English Council of State (including Sir Henry Vane) commissions William Dyer in the Anglo-Dutch War of 1652-54; United Colonies of New England commissions William Commander in Chief Upon the Seas for same war.
.....early 1652 Mary sails for and stays in England almost five years, studying Quaker beliefs of George Fox, who preached all over England, but seems to have been based in the northwest part of England. More info on George Fox: http://www.strecorsoc.org/gfox/title.html   This is the Parliamentary period, with Oliver Cromwell, the Lord Protector, ruling after execution of Charles I in 1649.
.....1653-54 William Dyer joins Capt. John Underhill in privateer action against the Dutch of New Amsterdam.
.....1657 Mary sails back to America via Barbados, landing in Boston, despite Gov. Endecott’s new laws regarding Quakers. On arriving in Boston in 1657 she is imprisoned for weeks in dirt-floored cell, until William learns of it and goes to Boston to rescue her. On the petition and bond of her husband she was permitted to go with him to Rhode Island, but never to return to Massachusetts.
..... April 1658 Mary arrested and expelled from New Haven, Connecticut for protesting Humphrey Norton's torture.

.....Summer 1659 Mary walks through forest from Providence to Boston, a distance of 44 miles, to visit fellow Quakers in jail. Mary jailed there, and husband William writes letter in her defense. She and the other Quakers were released  and permanently banished from Massachusetts Colony. 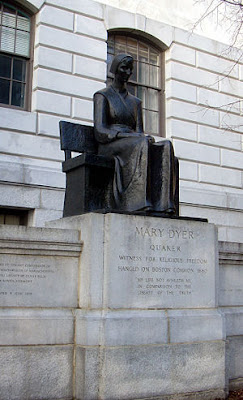 .....October 1659 Mary defiantly returns to Boston to visit Quakers, arrested and sentenced to death. She, with William Robinson and Marmaduke Stephenson, was tried and convicted for "their rebellion, sedition and presumptuous obtruding upon us notwithstanding their being sentenced to banishment on payne of death, as underminers of the government." (Notice that she was not condemned to death "for being a Quaker" as Wikipedia and genealogical sites write.) Robinson and Stephenson were executed October 27, but through the behind-the-scenes petition of John Winthrop Jr., Gov. Temple of Maine, various others, and her 19-year-old son, William Dyre (son William was Mayor of New York two decades later), she was reprieved on the same conditions as before. (A piece of theater arranged by the magistrates before the hanging because they were fearful of civil unrest if they executed a respected woman, for what was basically a misdemeanor.) She was again banished.
.....November 1659 Mary returns to Rhode Island, visits Sandwich in Plymouth Colony and is jailed briefly, then teaches Quaker beliefs on Long Island. She probably lived with the Sylvesters who owned Shelter Island. William Dyer may have arranged Mary's stay here, as he'd had dealings with the Sylvesters previously, and he knew she'd been there for the winter.
..... Early May 1660 After the death of Lawrence and Cassandra Southwick in early May, Mary returns to Boston without telling husband.
.....21 May 1660 Arrested while the General Court was in session. This is probably Mary's intention: to present herself in civil disobedience when it would receive the most public attention.
.....31 May 1660 Convicted in court, sentenced to death.
.....1 June 1660 Mary hanged at gallows on Boston Neck, aged about 49 years, leaving children aged 10 to 25. She may be buried in the Dyer family cemetery, now covered by the Newport naval hospital.
.....1661 William marries Catharine _______. Nothing is known of her background, but she did go to court against Charles Dyer after her husband William's death. She lost her suit, but Charles did provide a financial settlement for his stepmother and his half-sister Elizabeth.
.....1662 William and Catharine have child Elizabeth.
.....1663 Rhode Island Charter of Liberties is written by John Clarke, almost certainly with input from Roger Williams and William Dyer, and is sealed by King Charles II. This charter was used as a template for the United States Constitution's Bill of Rights (specifically the First Amendment). Like he had done with the charters of the 1640s and 1650s, William returned to England to bring home the 1663 charter.
.....1670 William makes formal proposal to King Charles II regarding rights, boundaries, and natural resources in Massachusetts Bay Colony.
.....1677 William dies and is buried on Dyer farm in Newport.
.....1959 Memorial statue to Mary Barrett Dyer erected in Boston, at the Massachusetts State House facing the Common.

All of these events are covered in the series of books on the Dyers, written by Christy K Robinson. The first two are novels based closely on fact, and the third is a lively and fascinating nonfiction book on their lives and the people and culture surrounding them.

Mary Dyer Illuminated (The Dyers #1)
Mary Dyer: For Such a Time as This (The Dyers #2)
The DYERS of London, Boston, & Newport (The Dyers #3)
For ordering info and synopses, click HERE.

TO LEARN MORE ABOUT MARY AND WILLIAM DYER, there's  a Dyer Descendants group on Facebook. And as of May 2020, there are more than 220 carefully researched articles in this blog--check the article archive in the margin. 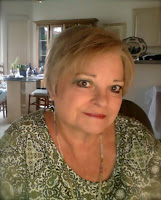