Mary Dyer and freedom of conscience

© Christy K. Robinson
“It is not the glorious battlements, the painted windows, the crouching gargoyles that support a building, but the stones that lie unseen in or upon the earth. It is often those who are despised and trampled on that bear up the weight of a whole nation.” ~John Owen, English Puritan minister, 1616–1683. 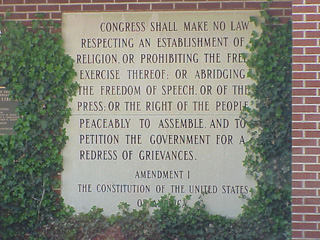 June 1, 1660 was a landmark date in American history. Its relation to civil rights guaranteed by the US Constitution's Bill of Rights should be noted, specifically the 1st Amendment regarding freedom of religion (to worship or not, as your own conscience dictates), and freedom of speech and assembly.

Mary Barrett Dyer, hanged in Boston on June 1, 1660, was martyred for liberty of conscience that Americans enjoy under the Constitution's Bill of Rights.  Other countries have modeled their constitutions and rights on those of the United States, so these liberties have become global.

Torture and persecution
In the late 1650s, Quakers had been persecuted for their nonconformism by having their tongues bored with a hot awl; men and women were stripped bare to the waist and flogged with up to 30 strokes of the thrice-knotted lash, to add more injury to each stroke; they had their ears either nailed to a post, or sliced off altogether; without a trial, they were thrown in earthen-floored jail cells, sometimes for months, with no candle or heat in New England’s harsh winters; prisoners were beaten several times a week. Even non-Quakers whose consciences were pricked by this harsh treatment were jailed, whipped, heavily fined, and disfranchised (lost their civil rights and vote) for harboring or sympathizing publicly with Quakers.

Contrary to popular opinion in genealogy sites, Mary Barrett Dyer wasn't hanged “for the crime of being a Quaker.” It wasn’t a crime to be a Quaker! However, they didn’t attend Puritan worship or teaching services or pay required tithes, didn’t keep the Sabbath holy, and criticized the government leaders for their cruelty. Mary Dyer provoked her own trials and execution for what we'd call civil disobedience, by repeatedly defying the totalitarian Puritan regime headed by Massachusetts Governor John Endecott. The Massachusetts Bay founders believed that religious error or dissent from their dogma was treasonable. 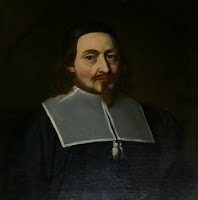 Endecott, a religious zealot, had a checkered past, leaving an illegitimate son in England before he emigrated to Salem, Massachusetts in 1629; treasonably cutting the “idolatrous” cross from the British flag; a Massachusetts committee reported in 1634 “that they apprehend [Endecott] had offended therein many ways, in rashness, uncharitableness, indiscretion and exceeding the limits of his calling;” acting in ways that endangered the patent that was their title to land in New England; creating a mint in Boston that made unauthorized—and therefore counterfeit—coins with a 1652 imprint for 30 years (so if the English government confiscated the minting, Boston could claim the coins were all from 1652 when they had little oversight during the English political upheaval); and punishing his indentured servant girl with 32 lash-stripes and public humiliation for fornication, bearing a child out of wedlock, and insistently naming his son as the predatory father (which, of course, would make John Endecott the father of a rapist and grandfather of a lowly servant’s bastard—can’t have that!). 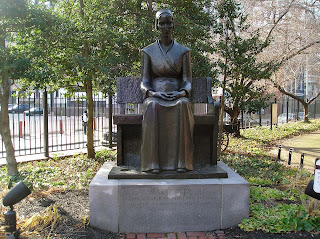 The colony and later state of Rhode Island was founded by Roger Williams in the 1630s as a haåven for freedom of conscience, and that’s where Mary and her husband and children made their home after being ejected from Massachusetts in 1637 over a religious matter prosecuted by the church state. Mary studied Quaker beliefs in England for several years, and returned to Boston only to be thrown into jail with no notice to her husband in nearby Rhode Island.

Though Mary could have lived out her life in safety, she believed she was called by God to try the bloody religious laws of Connecticut and Massachusetts, and she boldly entered their territory to both teach, and support her Friends in the faith by visiting them in prison.

Prepared to die
Her letters written from Boston prison to Governor Endecott, her actions, and her statements at trial demonstrate to us that she willingly sacrificed her life to stop the torture and persecution of people who were obeying the voice of God in their hearts. She wrote, “Be not found Fighters against God, but let my Counsel and Request be accepted with you, To repeal all such Laws, that the Truth and Servants of the Lord, may have free Passage among you and you be kept from shedding innocent Blood…My life is not accepted, neither availeth me, in Comparison of the Lives and Liberty of the Truth and Servants of the Living God… yet nevertheless, with wicked Hands have you put two of them to Death, which makes me to feel, that the Mercies of the Wicked is Cruelty. I rather choose to die than to live, as from you, as Guilty of their innocent Blood… Therefore I leave these Lines with you, appealing to the faithful and true Witness of God, which is One in all Consciences, before whom we must all appear; with whom I shall eternally rest, in Everlasting Joy and Peace, whether you will hear or forebear: With him is my Reward, with whom to live is my Joy, and to die is my Gain.”

Knowing that there was a death sentence hanging over her, she deliberately avoided her husband who would have stopped her, and returned to Boston, where she was arrested and jailed. She was convicted and condemned on May 31, 1660, and was hanged the next day, on June 1.

The shock over Mary Dyer’s death crossed the Atlantic immediately, and King Charles II put an end to the New England death penalty for religious practice, requiring that capital cases be tried in England. Public outrage in New England over Mary’s death actually consolidated sympathy for Quakers, Baptists, Jews, and others who refused to conform to Puritanism. Even some of the New England Puritans demonstrated their opposition to the harsh treatment of people of conscience, and suffered imprisonment, banishment, confiscation of property, and heavy fines. A number of those who’d suffered persecution converted to the Quaker faith. Gradually, the torture and persecution slowed.

William Dyer’s name appears on the 1663 royal charter granting rights of freedom of religion to Rhode Island colony. He and several others had worked closely with Dr. John Clarke of Newport, the architect of the document, to preserve the separation of church and state, and promote the freedom of conscience. One hundred thirty years later, the concept became concrete in the US Constitution's Bill of Rights, Amendment I.

To learn more about the Dyers' life, join her Facebook friends.
Posted by Christy K Robinson