The Bay Psalm Book, sung in the key of H-sharp

In New England, where the Dyers lived after 1635, there were no church organs—organs being related to the hated Catholic mass, and drawing attention away from God and to the skills of the performer. At Sabbath meetings of the Massachusetts Bay churches, they sang psalms without musical accompaniment.

Rev. John Cotton, Teacher of the Boston First Church of Christ (Congregational), disapproved of (though did not completely disavow) the use of instruments in worship.  Cotton said about music:
“We also grant that any private Christian who hath a gifte to frame a spirituall song may both frame it and sing it privately for his own private comfort and remembrance of some speciall benefit or deliverance. Nor doe we forbid the use any instrument therewithal: so that attention to the instrument does not divert the heart from attention to the matter of the song.”

He’s speaking of music composition and musical accompaniment in a private setting, not in public worship at the meetinghouse. At the meetinghouse, it was strictly a capella for many decades. 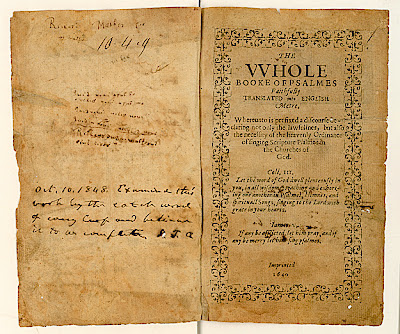 In 1640, three ministers published the first book in the American colonies: a psalter called The Bay Psalm Book that they approved for use in the churches of Massachusetts Bay. It was a text of psalms in rhyme, translated from Hebrew, without musical notation because almost no one was musically literate.

Rev. Cotton wrote in the 1647 tract, Singing of Psalms as a Gospel Ordinance,
“Wee lay downe this conclusion for a Doctrine of Truth. That singing of Psalms with a lively voyce is an holy Duty of God’s worship now in the dayes of the New Testament. When we say, singing with lively voyce, we suppose none will so farre misconstrue us as to thinke wee exclude singing with the heart; for God is a Spirit: and to worship him with the voice without the spirit were but lip-labour, which (being rested in) is but lost labour (Isa. xxix.13), or at most profiteth but little (Tim. iv. 8). But this wee say. As wee are to make melody in our hearts, so in our voyces also. In opposition to this there be some Anti-psalmists who doe not acknowledge any singing at all with the voyce in the New Testament, but onely spirituall songs of joy and comfort of the heart in the word of Christ.”

In a short time, congregations forgot the tunes, and each singer sang in his or her own key, melody, and rhythm. (Perhaps something like a “Happy Birthday” cacophony today.)

Thomas Walter wrote at the end of the 17th century: "The tunes are now miserably tortured and twisted and quavered, in some churches, into a medly of confused and disorderly voices. Our tunes are left to the mercy of every unskillful throat to chop and alter, to twist and change... No two men in the Congregation quaver alike or together, it sounds in the ear of a good judge like five hundred different tunes roared out at the same time with perpetual interferings with one another." Source: Puritans at Play: Leisure and Recreation in Colonial New England, by Bruce C. Daniels, p. 54.

David N. Redden recited the opening of the 23rd Psalm the way he had memorized it as a child: “The Lord is my shepherd; I shall not want. He maketh me to lie down in green pastures.”

Then he opened a weathered little book and read the version it contained: “The Lord to mee a ∫hepheard is, want therefore ∫hall not I. Hee in the fold∫ of tender-gra∫∫e, doth cau∫e mee downe to lie.”

Those lines were in a volume published in Massachusetts in 1640 that amounted to the Puritans’ religious and cultural manifesto. It was the first book printed in the colonies, and the first book printed in English in the New World. The locksmith who ran the hand-operated press turned out roughly 1,700 copies. The one in Mr. Redden’s hands is one of only 11 known to exist.

Mr. Redden, who is the chairman of Sotheby’s books department and has auctioned copies of Magna Carta and the Declaration of Independence, among other historic and valuable documents, will sell that copy on Nov. 26. Sotheby’s expects it to go for $15 million to $30 million, which would make it the most expensive book ever sold at auction — more expensive than a copy of John James Audubon’s “The Birds of America” that sold in December 2010 for $11.54 million (equivalent to $12.39 million in 2013 dollars), the current record. That beat the $7.5 million ($10.77 million today) paid for a copy of Chaucer’s “Canterbury Tales” at Christie’s in London in 1998, and the $6.16 million ($8.14 million today) paid for Shakespeare’s First Folio at Christie’s in New York in 2001.

But the Bay Psalm Book, as it is known, has a special place in bibliophiles’ hearts, so much so that Michael Inman, the curator of rare books at the New York Public Library, said the auction was “likely” to set a record, even though the Bay Psalm Book was “not a particularly attractive book” and was “rather shoddily done.” (The library owns one of the other 10 copies.)

“It’s what that book symbolizes,” Mr. Inman said. “These 11 copies symbolize the introduction of printing into the British colonies, which was reflective of the importance placed on reading and education by the Puritans and the concept of freely available information, freedom of expression, freedom of the press. All that fed into the revolutionary impulse that gave rise to the United States.”

In its way, experts say, the Bay Psalm Book laid the groundwork for famous texts of the Revolution like Thomas Paine’s “Common Sense.” It followed the first Gutenberg Bibles by more than a century and a half, and it was plagued by spelling problems. The word “psalm,” which is supposed to appear in capital letters at the top of each page, is spelled that way on the left-hand pages, but on the right-hand pages and on the title page, there is an “e” on the end:
“The WHOLE Booke of Psalmes Faithfully TRANSLATED into ENGLISH Metre.”
The volume also has a subtitle, as important to a religious book in the 17th century as to a 21st-century best-seller: “Whereunto is prefixed a di∫cour∫e declaring not only the lawfullne∫∫, but al∫o the nece∫∫ity of the heavenly Ordinance of ∫inging ∫cripture P∫alme∫ in the Churche∫ of God.”

The other copies are all held in libraries or museums. The Library of Congress has one. So does Harvard. So does Yale. And one copy made its way to the place the Puritans had fled — to England, and the Bodleian Library at Oxford University.

The copy being sold by Sotheby’s, which the auction house will display in New York on Monday, belongs to Old South Church in Boston, whose long history includes the baptism of Benjamin Franklin when he was a day old. Old South became known as a meeting place for angry colonists before the Boston Tea Party and, more recently, as the church at the finish line of the Boston Marathon.

The Bay Psalm Book was printed on a press that had been sent over with 240 pounds of paper and one case of type. Like Mr. Inman, Mr. Redden said the workmanship was amateurish — it was, after all, the first book published in the colonies and only the third item to come off the press. “They were kind of learning on the job,” Mr. Redden said, and some of the pages were bound in the wrong order. At the bottom of one, someone wrote, “Turn back a leaf.”
A version of this article appears in print on November 16, 2013, on page A14 of the New York edition of the New York Times with the headline: For First Book Printed in English in New World, Let the Bidding Begin.