Winthrop Fleet fights its way to New England in 1630

In late March 1630, in their new year and on Easter Monday, the Winthrop Fleet of business investors and religious refugees heard a sermon and blessing by their favorite minister, John Cotton, and left the harbor on England’s south coast. The strong winds and rain kept the fleet glued to the coast, though, for a few weeks, and many of the passengers, including Thomas Dudley’s family and John Winthrop’s son Henry, spent time ashore rather than on the cramped ships.

Only three days into their venture, while the fleet’s occupants were fasting and praying, some farm laborers they’d brought “pierced a rundlet of strong water” (a 15-gallon barrel of whisky used primarily for medicinal purposes), and were put in "a bolt" (probably tied or chained to part of the ship) for a night and day to punish them.

The ships set their sails for Salem, Massachusetts, where a previous party, led by John Endecott, had gone a year earlier to found a town and plant crops to support itself and the hundreds of people set to arrive in 1630.

The fleet was at sea for 10 weeks, two weeks longer than expected, and they were two months later than their original plan called for. Storms blew the fleet apart for days at a time. They’d fought the westerly gales and sailed south to the 43rd parallel before they tacked back to the North Atlantic. After a month, they were only halfway across the Atlantic, north of the Azores and west of the Bay of Biscay. The ships had to strike their sails in the tempest and were reduced to drifting if they wanted to keep their masts in one piece. “The sea raged and tossed us exceedingly, yet, through God’s mercy, we were very comfortable, and few or none sick, but had opportunity to keep the Sabbath and Mr. Phillips preached twice that day.”
Tensions mounted. Men fought and spent the night in chains. A servant made a private deal with a boy (presumably the ship’s boy) to purloin three biscuits a day from the communal food supply, and upon discovery, the servant was tied to a bar and had a basket of stones placed around his neck for two hours. A maidservant, being seasick, drank so much whisky that she was “senseless, and had near killed herself. We observed it a common fault in our young people, that they gave themselves to drink hot waters [whisky] very immoderately.”

We will resist the temptation to call Mr. Winthrop “Captain Obvious” about young people and hard drinking, because in their world, their era, their religious customs, alcohol poisoning was a rare thing. As a rule, their drinks were very low in alcoholic content.

By the 29th of May, two months after their launch, three of the fleet were just off the Grand Banks, south of Sable Island and about 600 miles east of Salem. On the third of June, knowing they were nearing dangerous shoals, they sounded for depth, but found no bottom.

Finally, on June 6, they sounded at 80 fathoms/486 feet. They were offshore of Aquamentius, Maine. The next day, Monday, they were becalmed, and they threw lines and a few hooks over the sides of the ship, and in two hours caught 67 codfish, “some a yard and a half long, and a yard in compass.” Any fish of 5½ to 6 feet will weigh 100 pounds or more, says Gulf of Maine Research Institute.

Still, they couldn’t proceed too fast for fear of running on the rocks of the Isle of Shoals, a long line of rocks and small islands. They took a large boat out of storage to sail before the ships and take soundings so they could safely sail south to Salem.

John Winthrop wrote in his journal on June 8, "We had now fair sunshine weather, and so pleasant a sweet air as did much refresh us, and there came a smell off the shore like the smell of a garden." They celebrated by catching another 36 cod, much needed because during the extra-long voyage, they had consumed their stores of salted fish, and were low on other provisions.

On June 9, they could see mountains on the mainland, and many islands or half-submerged rocks between the ship and the shore. On the 10th, they saw several large and small ships doing commercial fishing. On the 12th of June, they came around Cape Ann and arrived at Salem.

But conditions at Salem were harsh, with a short growing season exacerbated by the frosts and famines of the Little Ice Age. The fierce storms that had battered the Winthrop Fleet had also worn down the settlers—and killed perhaps half of them. The Endecott party used up the rations they’d brought, and were barely surviving on seafood and wild strawberries by the spring of 1630. Until the meager harvest in August, or the arrival of the Winthrop Fleet with their provisions, Salem was hungry, run down, and sick.

Some of the officials of the Massachusetts Bay Company went ashore and supped on venison pasties (meat pies) and “good beer.” They met the Endecott party of settlers—who were not in good shape, and begged for the food stores on board the Winthrop ships. The town was not ready to receive the hundreds of passengers—not with food and fresh water, and not with shelter. The Winthrop party was too late to plant a food crop and build shelters for the next winter, and they had enough food only for a few more weeks. 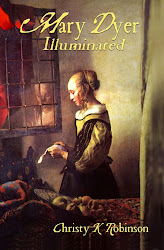 What were they to do? You’ll find out in my book, Mary Dyer Illuminated. See the tab on this page or click this link: Books on William and Mary Dyer.  The books closely follow and personalize many more luminaries than the Dyers: William and Anne Hutchinson, John Winthrop, John Cotton, Thomas Dudley, Isaak Johnson, and other brave and brilliant people.