Recommended BY educators, FOR educators.
And their students.

Two biographical/historical novels on the birth of America’s democracy and civil rights have used primary historical sources in American and British archives to retell the story of the Great Migration from England to New England through the eyes of Gov. John Winthrop, Anne Hutchinson and her son, and Mary and William Dyer. These books, even though they’re part fiction, correct the mistakes of previous accounts of Mary Dyer, and add little-known documented facts to the 350-year-old story. Mary’s sacrifice of her life to bring liberty of conscience to Western cultures would not have been possible without the people in her life, who you’ll meet in this series. This is no mere recital of facts and dates: it’s a narrative of real peoples’ lives.

Charles Barber wrote: “For those of you wish to have a better understanding of the struggles that led to our religious freedoms, Christy K. Robinson has written a two volume set of historical novels about Mary Dyer. Mary and William Dyer, Anne Hutchinson, and Roger Williams are largely responsible for us having true religious liberty and not just the right to practice the state religion freely. Christy brings to life all the major players as she tells Mary's story. It is a story of the struggles both the women and the men as a new civilization is created in New England.

“Like the best writers of historical fiction, Christy has thoroughly researched her material and creates dialogue based the letters and diaries of her characters. I must confess that I am a partial reviewer. Christy graded papers for me when she was a student at Thunderbird Academy. I could not be more proud of what she has accomplished. Go to Amazon.com and order Mary Dyer Illuminated, vol. 1 and Mary Dyer: For Such a Time as This, vol. 2.”

Don Keele wrote: “Mary Dyer Illuminated is an absolutely amazing book! Once I had a grasp of the context, I couldn't put it down. As I finished this one and read the notes at the end, I began to fathom the full depth of research and how many hours/years the author has put into this story. The book reaffirmed that history indeed repeats itself, and people today, while pretending to be more sophisticated than those of Boston in the 1600s, can be just as vicious with their words and actions towards those with whom they disagree. The book not only entertained me, but moved me deeply."

☼☼☼☼☼  5.0 out of 5 stars
Christy [the author] weaves in excellent explanations of the nuances of the theological
By Grandpa B
Christy has done an incredible job of bringing life in 1600s England and New England to life in her historical novel Mary Dyer Illuminated. I wish that she had written this book years ago when I was still teaching high school history classes. The depth of information that she weaves into her story-telling makes it easier for us to understand the struggles of life nearly five hundred years ago. Christy's gift includes bringing the issues of religious freedom and the rights of women to the center of her story.

For most of us, if we knew anything about Mary Barrett Dyer, our knowledge was limited to the fact that she was a Quaker who was hung in the Puritan-controlled Massachusetts Bay Colony. Her story is so much more than that, and Christy brings Mary's full story to life. Along the way, Christy weaves in excellent explanations of the nuances of the theological, political and economic issues of the day. She helps us understand the difficulties in creating a new civilization in New England. But none of this interferes with her telling Mary Dyers' story.

For those of us who have ancestors from the seventeenth century New England, Christy brings these people to life and gives us a chance to understand the issues that they faced daily. I heartily recommend this book to anyone who is interested in the issues of religious freedom and the rights of women. Those who want a better understanding of founding of the colonies in New England will also be satisfied.

☼☼☼☼☼   5.0 out of 5 stars
An Historical Novel That Will Keep You Turning the Pages
By Don Keele
An excellent read looking into the lives of the early Puritans, especially at the life of Mary Dyer. Christy Robinson has created a page-turning novel based on some of history's little known characters. She has done meticulous research into the life and times surrounding Mary Dyer, including many actual journal entries. If you like historical novels, this is a must read!


☼☼☼☼☼   5.0 out of 5 stars
Clear, accurate, fascinating!
By Rondi A.
As a high school English teacher, I am always looking for books to add to my reading lists—for myself and my students. Back in the 90s I was teaching in a Boston suburb and found a collection of essays about the history of intolerance in America that included the story of Mary Dyer. My students were fascinated by the first story particularly—“The Silencing of Mary Dyer”—since many of them lived in Boston where the story takes place. I've been including it in my "Beginnings" unit every since.

Now, I teach clear across the country and have brought Mary’s story to my students in Arizona. Again, they found the story interesting, but recently, it became all the more real to them when an alumna of our school published two books about Mary Dyer!

I immediately contacted Ms. Robinson and asked her to come share Mary’s story along with the research and writing process involved in writing a historical novel. I then bought and read the books and proceeded to be impressed at the turn of each page. This well-researched, well-written two-volume story of an amazing and inspiring woman, her husband and family, along with a large cast of supporting characters, acquaints the reader with those who contributed substantially to the freedom of religion that every American citizen enjoys, regardless of their belief. Ms. Robinson has brought to life a time and place that I, as a long-time student of American literature and history, enjoyed thoroughly, and enjoyed even more sharing with my students, who responded with interest as well. They didn’t have to grow up in Boston to be able to see and understand Puritan Boston’s terrain—geographical or theological. Ms. Robinson painted the picture clearly and accurately, on every level. She even corrects some long-held misconceptions about Mary Dyer. We all came away with a deeper appreciation for those who lived so long ago but whose life-actions had far-reaching consequences.

Good reads for every age, Ms. Robinson’s books can now be found on this teacher’s American Literature book list. I will recommend them with enthusiasm and pleasure for years to come.

Mary Dyer: For Such a Time as This (The Dyers Volume 2) (Paperback & Kindle)

☼☼☼☼☼ 5.0 out of 5 stars
History that Impacts Everyone Now
By Don Keele
In Book Two, Author Christy K. Robinson once again breathes life into the characters of William and Mary Dyer as she expands the story of the start of religious liberty in the United States. Mary Dyer: For Such a Time as This, is a fascinating historical novel that brings to light the horrible persecution of people who didn't subscribe to the exact religious beliefs of those in power in the colonies of the 1630's. The Puritans, then in power in Boston, were quick to jail, whip and even destroy those who were Baptist, Quakers and/or even people of no religious beliefs. Mary Dyer's life and subsequent death shed light on their persecution and caught the attention of the Crown in England, resulting in those persecutions being ended, as well as opened the door for the subsequent separation of the powers of church and state in the Colonies, which, a hundred years later were written into our Constitution. Mary Dyer: For Such a Time as This is a must read for anyone wanting to know more about the history of the freedoms that we enjoy in the United States.

☼☼☼☼☼  5.0 out of 5 stars
I heartily recommend both volumes for readers from junior high on up,
By Grandpa B -
In her second volume about Mary Dyer, Christy focuses on Mary's personal struggles with her faith and marriage. For those of us who have lived in the 20th and 21st centuries, it is difficult to understand how Mary could be so committed to her religious evolution. Among Christy's gifts in telling the story is her ability to put us inside Mary's mind as she gives up her roles of wife and mother as her religious convictions become the sole focus of her life. Her descriptions of the oppressive policies of the colonial leadership should make us all thankful for what the Dyers and Roger Williams created and defended in Rhode Island.

I heartily recommend both volumes for readers from junior high on up. Social studies teachers should read these books so that they can better explain the struggles that created and preserved our freedoms. Our understanding of this era, its leading figures and the challenges that they faced is forever enriched by what Christy presents in these books. 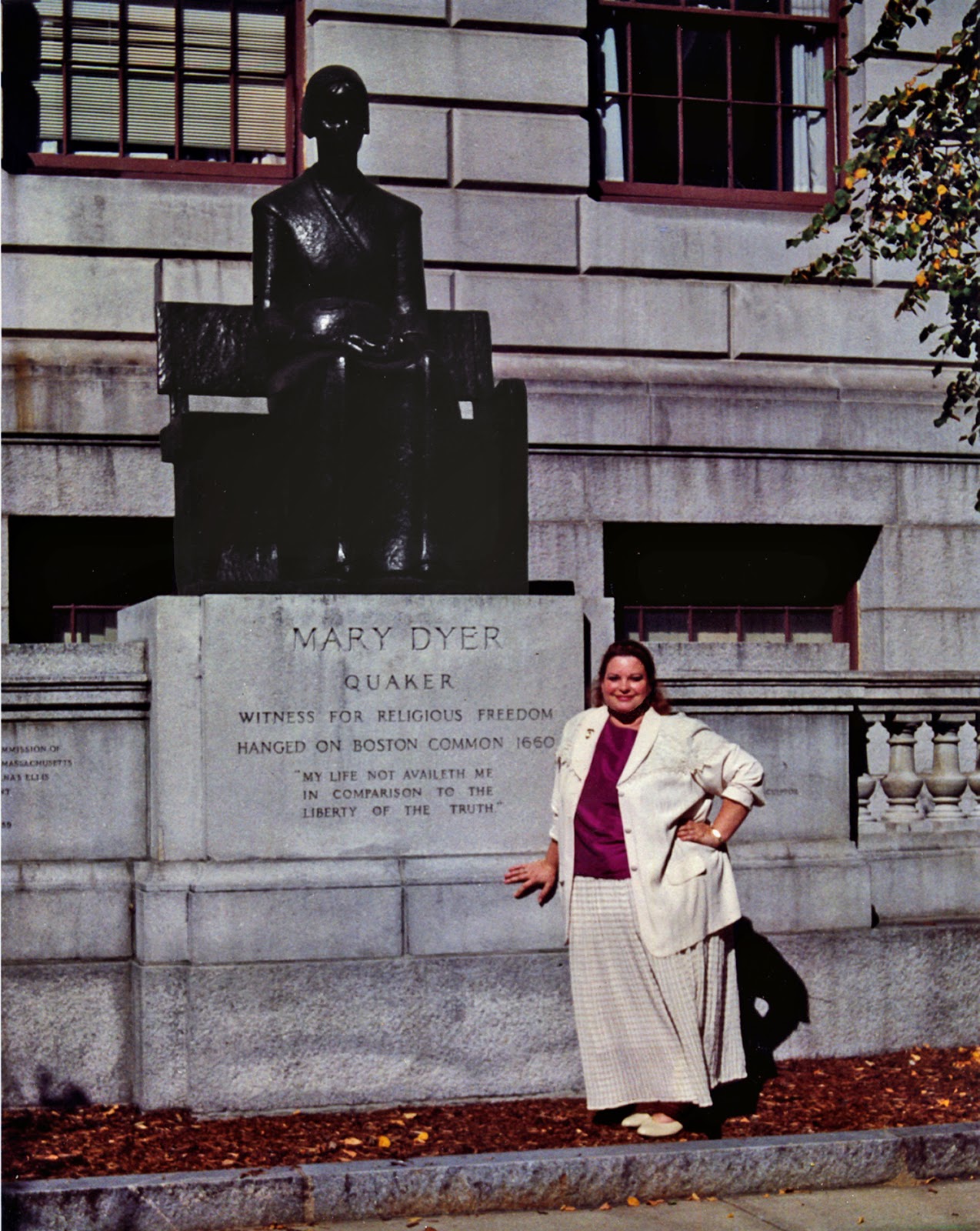