Boston’s prison during the Dyer years

Mary Dyer kept in a Cobhole, said her husband

The English and colonial American judicial and penal systems of four centuries ago were much different from ours. In our modern system, we often (incorrectly) use “prison” and “jail” interchangeably, but there is a distinction. A jail is meant for short-term detention between arrest and court conviction, or for terms of a year or less, and it’s run by a local authority such as a city or county. A prison is meant for long-term incarceration of convicted felons, and is administered by a state or federal authority. http://www.bjs.gov/index.cfm?ty=qa&iid=322

Back in Merry Olde England, the American settlers had experienced, or known of, harsh prison conditions. Incarceration for theft or assault could become a death penalty because of rampant disease and infection, cholera and tuberculosis, exposure to extreme cold, starvation, and injury. Prison terms were generally short because if a prisoner was guilty, he or she would be hanged, put to labor to pay off a debt, pressed onto a ship’s crew, or transported elsewhere. If they were acquitted, of course, they were released.

The Puritans of Massachusetts Bay and Plymouth Colonies remembered that their ministers, and their relatives and neighbors, had been jailed and died there for rebelling against the Church of England. It was not their intention to throw offenders into prison and forget them. They believed their punishments would be merciful, for the instruction, example, and purification of their flock.

In New England, courts inflicted physical punishment for fornication or adultery, drunkenness, theft of food or property, servants assaulting masters, rape, swearing, and other crimes. Blasphemy, reviling a member of the court, or slandering could get your tongue stuck in a forked stick for several hours, and possibly a whipping. An alcoholic would be made to wear a “D” (for drunkard) on his chest. A bondservant’s theft of food from his master was a serious crime because food was rationed in the winter and spring—that could get 10 stripes on his bare back. Assault could mean whipping and time in the stocks. While adultery could be a capital crime, the courts usually showed mercy at the last moment by whippings and fines.
Boston, March 7, 1637
Thomas Pettet for suspition of slaunder, idlenes, & stubbornenes, is censured
to bee severely whiped, & to bee kept in hould.
William James being presented for incontinency, knowing his wife before Marriage [the baby must have been born in under 9 months], was sentenced to bee set in the bilboes at Boston, the 5th,  in the afternoone, & in the stocks at Salem upon the next Courte day, & bound in 20£

Boston, Sept. 1637
Mr John Greene, of New Providence, was fined 20£, & commited untill he Jn Green the fine of 20£ bee payd, & enjoined not to come into this jurisdiction vpon paine of fine or imprisonment, at the pleasure of the Courte, for speaking contemptuously of the magistrates.

Some crimes, notably those of conscience, religious practice, or dissent with the government, were punished with banishment, including putting the offender on an outbound ship at their own considerable expense, and shipped back to England.

More serious crimes that theocratic courts believed couldn’t be repented of and apologized for, like murder, buggery of animals, or homosexuality, were punished with hanging. Women who were accused of being witches (they weren’t, of course) were stripped and examined for “witches marks” like skin tags and moles, and if they were convicted, they were hanged.

There are several colonial court actions regarding the Boston prison:
Sept. 1635: ordered, that Mr Brenton shall finishe, att the publ charge, all that is necessary to be done att the prison att Boston.

3 March 1636: All offenders which shalbe in the prison att Boston att the tyme of any Court there holden, shalbe tryed att that Court, except in the war’t of his commitment hee be reserved to the greate Quarter Court.  [Yet, Mary Dyer was imprisoned in late March 1657, when she arrived in Boston after five years in England, and they held court and even elections, without bringing her to trial. She had to get a letter out to William Dyer to come rescue her.]

2 June 1641: The Governor & 2 other magistrates have power to agree with the marshal & Gov & the keeper or the prison.

Boston’s prison on Prison Lane, later called Queen Street, had  “outer walls ... of stone three feet thick, its unglazed windows barred with iron, the cells partitioned off with plank, the doors covered with iron spikes, the passage-ways like the dark valley of the shadow of death.”  https://archive.org/stream/annalsofkingscha01foot/annalsofkingscha01foot_djvu.txt (page 86)

In the 1630s and 1640s, prison or jail terms weren’t meant to be life terms, or particularly long incarcerations. They were a way to punish misdemeanor offenses by forced labor, or holding prisoners between court sessions and immediately after corporal punishment like flogging, branding, or ear removals. But with the dawn of the 1650s, under Gov. John Endecott and Richard Bellingham, punishments became more harsh and prolonged, and prisoners were held without trial.

There are anecdotes about English prisons that mention fleas and lice, rats that bit or fed on bodies, and rampant disease and infection. It seems reasonable to expect similar conditions in Salem, Plymouth, and Boston.

Some of the notable cases I found that involved prison time were these:
In August 1659, William Dyer, a former Rhode Island attorney general who had represented numerous cases in Boston, wrote to the General Court of Massachusetts Bay Colony, asking that his wife Mary be released from prison. The letter described how Mary was soaking wet (probably from rain), and thrust into a bare, cold room with an earth floor, which was worse treatment than they’d give to a domestic animal in their care, and that she’d been kept solitary and not let outside for fresh air or exercise.

Having received some letters from my wife, I am given to understand of her commitment to close prison to a place (according to description) not unlike Bishop Bonner's [Catholic torturer] rooms ... It is a sad condition, in executing such cruelties towards their fellow creatures and sufferers ... Had you no commiseration of a tender soul that being wett to the skin, you cause her to thrust into a room whereon was nothing to sitt or lye down upon but dust ... had your dogg been wett you would have offered it the liberty of a chimney corner to dry itself, or had your hoggs been pend in a sty, you would have offered them some dry straw, or else you would have wanted mercy to your beast, but alas Christians now with you are used worse [than] hoggs or doggs ... oh merciless cruelties. …My wife writes me word and information, she had been above a fortnight and had not trode on the ground, but saw it out your window; what inhumanity is this, had you never wives of your own, or ever any tender affection to a woman, deal so with a woman, what has nature forgotten if refreshment be debarred?

He continued, saying that when a Quaker was arrested merely for visiting prisoners (as William himself had done without molestation), and “answer be not made according to the ruling will; away with them to the Cobhole or new Prison, or House of Correction…”

I’d never seen the word “cobhole” until I read William’s letter. So I looked it up, and there was absolutely nothing. I found that the English word for the Spanish silver coin or cabo, was “cob.” Coins were difficult to come by in New England, and cobs were much-clipped lumps of silver that were used as currency. So a cobhole was probably sarcastic slang for a money pit—a lucrative extortion racket where they threw away money for “services” a prisoner didn’t receive.

Mary Dyer was imprisoned at Boston in the spring of 1657, twice in the late summer and early fall of 1659 (her first date with the gallows), and from May 21-June 1, 1660, when she was hanged. According to Plymouth Colony records, Thomas Greenfield, a man who had brought her to Sandwich from Newport in violation of the “No Quakers Allowed in Our Colony” law had to pay 11 shillings for her November 1659 imprisonment in Plymouth, as well as 15 shillings for her boat passage away from there, probably to Shelter Island. If we compare a monthly rate of some other prisoners, eleven shillings represented about a week or 10 days of prison fees. 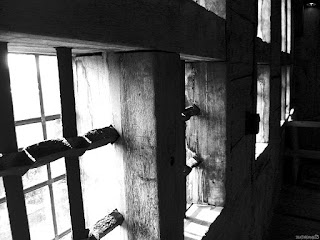 Many Quakers, men and women, were stripped to the waist and whipped 10 stripes upon entry to prison. Women like Katherine Scott were whipped for speaking out against men, pointing out that the court violated their own laws. And it seems (to me) that female Quaker preachers were whipped more for the "abomination" of being women preachers than for their beliefs or actions.  I’ve found no evidence that Mary Dyer was whipped. If she was not, perhaps it’s because she didn’t do public speaking (there’s no report or evidence of her words being recorded), or because she was a high-status woman with a powerful husband.

Mary Dyer was acquainted with the horrors of prison, both in the experience of her friends, and of her own. She still chose to endure the persecution to make a statement to the theocratic court that their torture and hangings must stop.

See also Grandparents-in-Law, the Quaker Connection for a letter sent from Quaker prisoners being held in the Boston prison for many months without trial.

More great anecdotes about mid-17th century England and New England, supported by research, can be found in the nonfiction paperback and ebook The DYERS of London, Boston, & Newport, by Christy K Robinson. It's the third in a series about Mary Dyer, Anne Hutchinson, Sir Henry Vane, Roger Williams, and John Winthrop.