Boston courthouse where Mary Dyer was tried as a Quaker

Some of the images are of the Boston Town House where trials were held from 1657 on, and the undeveloped space as it would have appeared before 1630, when Boston was founded.

William Dyer, the first attorney general in America, was there several times on court business, as we know from his letter to the General Court on his wife's behalf. And Mary Dyer knew the courthouse from her arraignments and capital trials in 1657, 1659, and 1660. (The Old State House is not the same building or location as the State House where the Mary Dyer and Anne Hutchinson statues are located. See map below and click photo to enlarge.)

I found the animation on the Facebook page of City of Boston Archaeology Program, who told me that the animated GIF is not copyrighted. This was their caption:


"In this one we feature the Old State House, first built in 1713, walking back its 1775 appearance during the Boston Massacre (with a cameo from the First "Old Brick" Church built in 1713), and the Town House first built in 1657 before ending with its approximate appearance before European arrival. Today, the building is operated by the The Bostonian Society."

GIF created by and courtesy of the City of Boston Archaeology Program, used by permission.
http://giphy.com/gifs/history-landscape-boston-3o7ZexZwpEP1Ili9bO


For more information on the 1657 Statehouse or Town-House, click on this Wikipedia article. 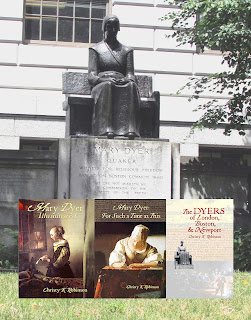