In the English town of Boston, Lincolnshire is the 700-year-old church of St. Botolph's, the country's largest parish church. In 1612, Rev. John Cotton, a scholar with multiple degrees in theology, was appointed vicar of the church. Though his preaching was controversial with the Church of England bishops, his charisma and ability to draw tithe-paying listeners from miles around were much-appreciated. Cotton held his position until 1632, when he and his first wife became gravely ill with malaria. She died, and he recovered over a period of about a year. But then, when King Charles II and Bishop Laud reissued the anti-Puritan The Book of Sports, Rev. Cotton was summoned to a hearing for his refusal of the command to have it read aloud. He went into hiding, remarried, and set out for the new Boston, in Massachusetts Bay Colony in 1633.

During his years of ministry at old Boston, Rev. Cotton's sermons caught the attention of Anne and William Hutchinson, newlyweds from Alford, Lincolnshire, about 20 miles to the north. Even in good weather, 20 miles would be a day's journey each way, so you know that they valued their pastor's teaching and friendship.

As many people know, Anne and William Hutchinson and many members of their large families emigrated to the new Boston in 1634. After trials for sedition and heresy, the Hutchinsons were exiled from Massachusetts in late winter 1638. They and their considerable number of supporters bought land from the Narragansett Indians and settled in Pocasset, later named Portsmouth, Rhode Island. 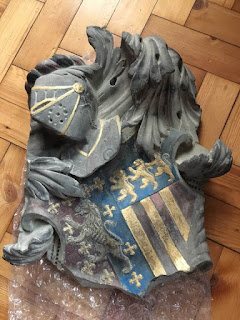 Some of the Hutchinson relatives moved back to England; some never left England at all. One of William Hutchinson's brothers was John Hutchinson of Alford, who stayed in Lincolnshire. Among John's nine or ten children was Samuel, born 1643. Samuel was born in the same year that Anne and her children were massacred at their farm. He was her nephew-by-marriage, and first cousin to Anne's and William's children.

In 1668, Samuel married Catherine Bonner. In 1680, he was elected Mayor of Boston in that county, and he served as Mayor again in 1695. Both Samuel and Catherine died in 1696. This Samuel (out of many Samuels in numerous generations, so it gets very, very confusing to figure out which he was) had a memorial plaque placed in St. Botolph's church, perhaps by his son Stephen Hutchinson, Boston's mayor in 1699.

This plaque came to light in a Facebook group called "Partnership of the Historic Bostons." Alison Fairman posted a photo, writing:
"This was found recently in St Botolphs Church Boston. The College of Arms in London tell me that they are the Arms of a Hutchinson and his wife possibly Riddell. They are not the actual followers of John Cotton but the Arms perhaps of [Hutchinson] descendants."

Then sister and brother, Ann Epton and Colin Epton, got into the action with these comments:


Ann Epton: any ideas?
Colin Epton: Already on it
Ann Epton: Good man
Colin Epton: According to Burke its definitely Hutchinson of Lincolnshire and Ridell of Gloucester and Oxford. Several of the Hutchinsons went to Massachusetts but I haven't found the Ridell connction yet.
Colin Epton: Got them. Burke has Ridell-alias-Bonner. Don't ask me why, possibly related by marriage and for some reason allowed the same arms. Samuel Hutchinson b. Alford 1644, m Catherine Bonner in 1668 at Lincoln, Lived in Boston and had several children there.
Samuel and Catherine both died in Boston in 1696. (That's Boston Lincs )
Ann Epton: So that’s a really old one! Probably removed during one of the restorations.
Colin Epton: Probably. Do we know how and where it was found?
Ann Epton: No well I don’t I had no idea of it’s existence until now.
Colin Epton: Samuel was the son of Edward Hutchinson, Mercer, of Alford and grandson of John Hutchinson, Sheriff, Alderman and Mayor of Lincoln C. 1550.
Colin Epton: William Hutchinson, who went to Massachusetts colony in 1633 was Samuel's elder brother. William was married to Anne Hutchinson who was at the centre of a religious row in Massachusetts and was accused of heresy. Her family and followers were exiled from the colony and left to found the colony of Rhode Island. Apparently the family can be traced back to Bernard Hutchinson of Cowlan, Yorks, recorded in 1262. He's recorded as an Esquire, and as this would be the time when heraldry was becoming very popular among the gentry, he may well have been the first one to bear these arms.
Colin Epton: The arms are:
Per pale gules & azure. Semee of crosses crosslet or, a lion rampant argent, armed and langued of the third (Hutchinson of Co. Lincoln )
Impaling:
Paly of 6 or & gules. on a chief azure 3 lions rampant of the first. (Bonner / Ridell of Co. Oxford / Gloucester.)
The crest would be his -
A cockatrice azure. crested, jelloped, and armed gules issuing out of a ducal crown or.
Colin Epton: I might see If I can reconstruct this, complete with its crest.
Colin Epton: According to Pishey Thompson, Samuel Hutchinson was Mayor of Boston in 1695 and his son Stephen was Mayor in 1699.
Thompson doesn't mention this memorial in his book, but he only lists what he calls the "main" memorials in the church, so it may have been there in his day, or it might already have been lying broken in a cupboard.
Ann Epton: So another Mayor has his own memorial. Very interesting.

Then Colin did more research and photoshopping (which he calls a time machine), with this result:


I've put Samuel Hutchinson into my Ancestry pedigree (though he is NOT my blood relative, my readers will get a kick out of this). Here's how I relate to Samuel Hutchinson the Mayor of Boston: First cousin 1x removed of wife of 9th great-uncle. In other words, he's the relative of the sister-in-law of my ancestor, Charles Dyer.
Many thanks to Alison Fairman for the original photo, and to Ann Epton and Colin Epton, amateur historian, genealogist, and time traveler, with a particular interest in Lincolnshire.

*****
Do you enjoy this site's articles and photos? If so, please support the author's continued research with the purchase of her books, or push the Donate button on this page.

Christy K Robinson is author of this website and these books. Click the book titles to find them in paperback and Kindle.