The Cambridge Agreement that propelled 700 to 1,000 colonists to New England in 1630 was completed and signed between August 26 and 29, 1629. Several versions of the compact were collated and combined by John Winthrop, who would become the most famous governor of Massachusetts Bay Colony. 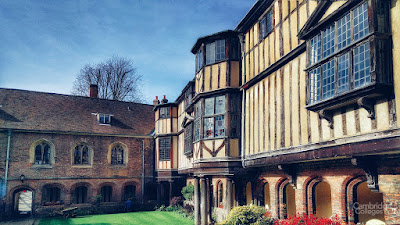 The Cambridge Agreement was signed at Queen's College, Cambridge University in England, and it preceded the charter the signers bought from King Charles I. Winthrop was perhaps the most fierce defender of keeping the colonial charter in Massachusetts, where it couldn't be destroyed or reneged by kings or parliaments in England.

On August 26, 1629, a group of influential Puritans gathered in Cambridge, England, where they reached an important decision. Based on “the joynt confidence we have in each others fidelity and resolucion,” they committed themselves “to embarke for the said plantacion [the project the Massachusetts Bay Company was sponsoring in Massachusetts] by the first of march next . . . to inhabite and continue in New England.” But they set an important condition: “Provided alwayes that before the last of September next the whole governement together with the Patent for the said plantacion bee first by an order of Court legally transferred and established to remayne with us and others which shall inhabite upon the said plantacion.”

Pynchon was among the provocateurs on the board of the Massachusetts Bay Company. He sought to goad the Bay Company into action. With eleven others, including financial backers Sir Richard Saltonstall and Isaac Johnson, future governors John Winthrop and Thomas Dudley, and Pynchon’s neighbor from Roxwell in Essex, Kellam Brown, Pynchon signed the Cambridge Agreement.

“Agreement of Cambridge. Upon due consideration of the state of the plantation now in hand for New England, wherein we (whose names are hereunto subscribed) have engaged ourselves: and having weighed the greatness of the work in regard of the consequences, God’s glory and the churches good: As also in regard of the difficulties and discouragements which in all probabilities must be forecast upon the prosecution of this business: Considering withall that this whole adventure grows upon the joint confidence we have in each other’s fidelity and resolution herein, so as no man of us would have adventured it without assurance of the rest: Now for the better encouragement of ourselves and others that shall join with us in this action, and to the end that every man may without scruple dispose of his estate and affairs as may best fit his preparation for this voyage, It is fully and faithfully agreed amongst us, and every of us doth hereby freely and sincerely promise and bind himself in the word of a Christian and in the presence of God who is the searcher of all hearts, that we will so really endeavor the prosecution of his work, as by God’s assistance we will be ready in our persons, and with such of our several families as are to go with us and such provisions as we are able conveniently to furnish ourselves withall, to embark for the said plantation by the first of March next, at such port or ports of this land as shall be agreed upon by the Company, to the end to pass the Seas (under God’s protection) to inhabit and continue in New England. Provided always that before the last of September next [1629] the whole government together with the Patent for the said plantation be first by an order of Court legally transferred and established to remain with us and others which shall inhabit upon the said plantation. And provided also that if any shall be hindered by such just and inevitable Lett or other cause to be allowed by three parts of four of these whose names are hereunto subscribed then such persons for such times and during such letts to be discharged of this bond. And we do further promise every one for himself that shall fail to be ready through his own default by the day appointed, to pay for every day’s default the sum of £3 to the use of the rest of the Company who shall be ready by the same day and time. To this Compact do we ascribe our names and our honor by the grace of God.”

This act pressed the Massachusetts Bay Company to set in motion the expedition of 1630 which brought 700 or more colonists to Massachusetts.

The proviso that the settlers would take the company charter with them proved historically momentous. The colony relied on the charter as the basis for its governmental powers. Though authorities in England repeatedly requested its return to London, the colonists never sent it back. 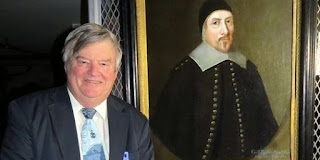 David M. Powers is a native of Springfield, Massachusetts, and a graduate of Carleton College and Harvard University. He speaks about and writes books and articles on seventeenth century Puritan history. He lives on Cape Cod. You can follow his Facebook history page, Damnable Heresy and William Pynchon.