And for the first time anywhere, learn who the
FEMALE co-founders of Newport were!

William Dyer was 28 years old when he co-founded Portsmouth, Rhode Island, in 1638. (It was called by its native American name, Pocasset, at the time.) His name appears on the Portsmouth Compact with the other men who bought Aquidneck Island from the natives, and it's his handwriting at the top of the document.


He was 29 years old on April 28, 1639, when he co-founded the city of Newport, Rhode Island and signed the Newport Compact. As clerk of the town, and later Secretary of the colony, it's almost surely William Dyer's handwriting that headed the compact that the founders signed.

After the town was legally incorporated came the distribution of community, home, and farm land parcels, and, of course, the streets and highways. William Dyer was one of the small commission that surveyed and apportioned the lots and boundaries. The following records are scanned from Records of the Colony of Rhode Island and Providence Plantations in New England, Vol. 1, 1636-1663. (I added the modern dates.) 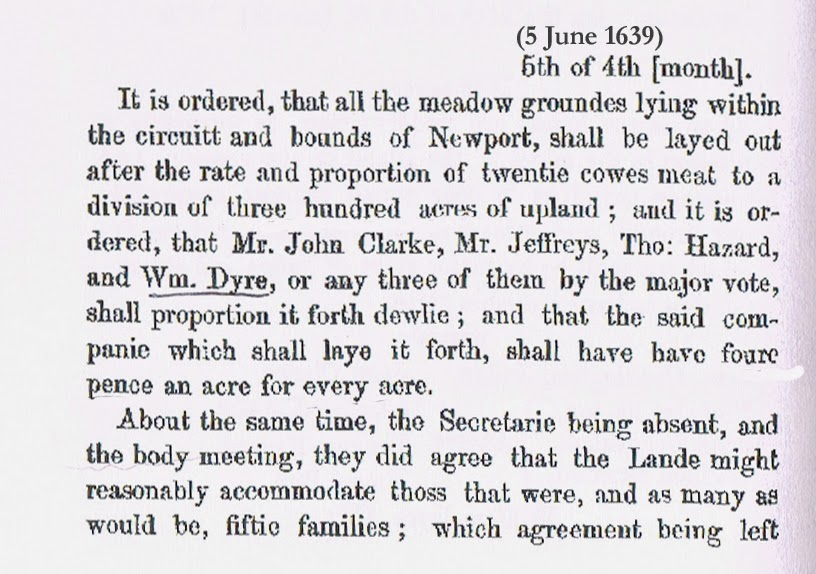 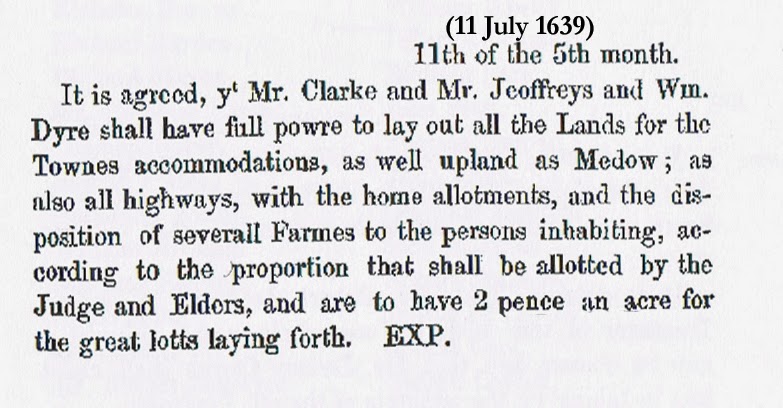 Historical records mention only the men who attended assembly meetings, voted, held court, or signed documents, but the women should be remembered for their many sacrifices in moving the household, servants, small children, livestock, and possessions, and starting in a new, rugged place where they lived in wigwams while their first houses were being built. It was the Little Ice Age, and winters were longer and more severe than we experience now. They had just settled in Boston for a few months to four years when they were exiled and had to start again in the wilderness of Rhode Island. A year later, some of the settlers at Portsmouth began again at Newport.

Newport's female co-founders were:
This list is a family snapshot taken in 1639. Some of the founding women died and were replaced by a later wife who managed the household and bore more children. The families who settled Portsmouth and Newport were young and strong, and in their 20s and 30s when they migrated from England to Boston, then settled around New England. They had even more children once settled in Rhode Island. The nine families listed as the first founders were joined by hundreds of other pioneering families within a few months and years.

The attraction of Rhode Island was its dedication to living virtuous, responsible lives in a secular democracy, where people of many beliefs (Puritan, Anglican, Antinomian, Catholic, Baptist, Seeker, Quaker, Jewish) or no belief, lived in safety from religious persecution. The exception was that their first, leading members among the co-founders of Portsmouth, Anne and William Hutchinson, were hounded by the Boston theocratic government (ministers, magistrates, and governors) to the point that they moved to the Dutch colony of New Netherland to try to found a new settlement, only to be massacred by Native Americans in 1643. As I learned while researching my book, Anne Marbury Hutchinson: American Founding Mother (see below), the massacre carried out by the tribe may have been sanctioned by the Boston theocrats.


Christy K Robinson is author of two biographical novels on William and Mary Dyer, and a collection of her nonfiction research on the Dyers, as well as a 2018 biography of Anne Marbury Hutchinson. Key figures are Anne Hutchinson, Edward Hutchinson, John Winthrop, Katherine and Richard Scott, Roger Williams, Dr. John Clarke, Nicholas Easton, John Endecott, Henry Vane, and others.


Christy K Robinson is author of these books: