How the English colonists celebrated thanksgiving

In 1630, the first ripples of the Great Migration brought small convoys of ships from England to Massachusetts Bay after ten to twelve arduous weeks at sea, where they prevailed despite adverse winds and stale and insect-infested food. These were the Winthop Fleet, named for their governor, John Winthrop, and they had left families, farms, and inheritance to found a New Jerusalem and usher in the Second Coming of Jesus Christ. 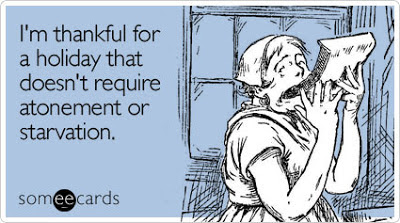 They fought winds and tides to sail south along the islands and shoals of Maine to Cape Ann, to find the Endecott party at Salem, who had sailed there in 1628-29 and were supposed to have built houses and planted crops for the 1630 emigrants. But what the Winthrop Fleet, who were hungry and sick, found when they reached Salem, was a village of miserable huts, its residents politely but alarmingly asking if the new arrivals had any food to share. Half the Endecott party were dead or dying, and now the Winthrop party began to die of fevers or scurvy. When they arrived in early July, it was too late to plow and plant for the autumn which came in August and the winter which would come in early October. The fleet staggered into harbor between late June and mid-August. Winthrop’s second son, Henry, had drowned in a river almost immediately upon arriving in Massachusetts in early July.

When a ship arrived safely at Cape Ann, John Winthrop wrote in his journal on Thursday, August 8, 1630, “We kept a day of thanksgiving in all the plantations.”

On thanksgiving days, non-essential work and commerce was prohibited, and families and servants were required to attend church services for hours. It was a day for solemn, agonizing prayer and soul-searching to discover hidden sin and confess it, so that God’s wrath would be appeased and he would not withhold his blessing from his recalcitrant children. 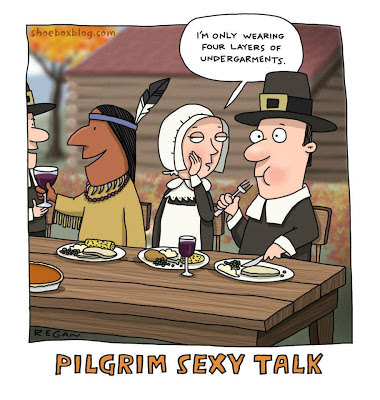 Thanksgiving was not a feast day. It was a fast day. Thanksgiving was a day of sorrow, to repent, to turn away from a sinful, rebellious life and return to God’s grace. It wasn’t enough for an individual person to repent—they were the Church, the body of Christ, and repentance and atonement were important for the entire community. They didn’t conceive of “rugged American individualism” at this time. They were wed to Christ and one another. Unmarried people were not permitted to live alone—they were placed in families. Wilderness pioneers were up to no good. In Plymouth Colony, a family tried to build a farm out in the woods by themselves, but were brought back by court order to live in community for the good of all.

There would have been feast days, too, for celebrating weddings and births, and harvests. But because they weren't connected to the historical events that you'll see below, they didn't make it into John Winthrop's historical journal.

In 1630, the majority of the Winthrop Fleet arrivals stayed in Massachusetts, though they couldn’t be supported in Salem as hoped: they needed fresh water. They scouted on foot, and planted the Dudley group at Charlestown, and the Winthrop group nearby at Boston. Some of the intended colonists returned to England, but the passengers faced piracy, broken masts, and even greater privation on the way back to “Babylon,” which was experiencing another wave of bubonic plague.

The ones who stayed in America lived in dugout shelters, tents, and cabins that resembled stables—and this was during the Little Ice Age, when they experienced severe winters with frozen bays. They had few stored provisions, no grain, no vegetables or fruit.  The Plymouth colony (the Pilgrims) helped as they could, and the few Indians who hadn’t moved to their winter camps traded bits of Indian corn and venison, and dried fish. This season was the Starving Time.

On the 11th of February 1631, when “great drifts of ice” floated in Boston Harbor, a sentry spotted the Lyon, one of the ships of the Massachusetts Bay Company, lying at anchor nearby. The ship’s master had rushed home to England, filled up with foodstuffs, and sailed back across the dangerous North Atlantic in winter (almost unheard-of because of the severity of storms), to relieve the suffering at the Bay.

John Winthrop wrote: “The poorer sort of people (who lay long in tents, etc.) were much afflicted with the scurvy, and many died, especially at Boston and Charlestown; but when this ship came and brought store of juice of lemons, many recovered speedily. It hath been always observed here, that such as fell into discontent, and lingered after their former conditions in England, fell into the scurvy and died.”

In other words, those who regretted leaving the comforts of Babylon for the privations of New Jerusalem, were more prone to disease and death. Scurvy is a wasting disease caused by lack of Vitamin C.

Winthrop’s Journal, Feb. 22, 1631: “We held a day of thanksgiving for this ship's arrival, by order from the governor and council, directed to all the plantations.”

On Nov. 2, 1631, the Lyon arrived again with important people, including the Winthrop family, Rev. John Wilson (who would baptize the Dyers’ son Samuel in 1635 and revile Mary Dyer at her execution), Isaac Robinson (son of the Pilgrim pastor, Rev. John Robinson), etc., and food to last them the winter. On Nov. 11, Boston held a day of thanksgiving.

Many times throughout the 1630s and 1640s, Winthrop wrote of holding fast days and thanksgivings. Ironically, when famine and disease came upon the Bostonians, the governor, magistrates, and ministers would call a fast day to confess the sins they and their neighbors must have committed to deserve all the disasters which befell them.

Thursdays were the days when people were required to attend church services for teaching, and when courts would schedule the punishment of sex offenders, thieves, and (ahem) church members who neglected regular attendance, with time in the stocks and/or public whipping. Mary Dyer’s first execution date, October 27, 1659, was a Thursday. Her two Quaker friends were hanged; she was reprieved. Then the people who had come to town for the “festival” went to church, no doubt to hear sermons and lectures related to the just judgments of God and the courts. Days of thanksgiving, called “public days,” were also set for Thursdays.

In 1636 and 1637, Massachusetts Bay and Plymouth Colonies had fought the Pequot War, which was less war than genocide and enslavement of a Connecticut tribe of Native Americans. Hundreds of Pequots were slaughtered and burned, and Plymouth’s governor, William Bradford, wrote this of one of the Indian villages :
“It was a fearful sight to see them thus frying in the fire and the streams of blood quenching the same, and horrible was the stink and scent thereof; but the victory seemed a sweet sacrifice, and they gave the praise thereof to God, who had wrought so wonderfully for them, thus to enclose their enemies in their hands and give them so speedy a victory over so proud and insulting an enemy.” 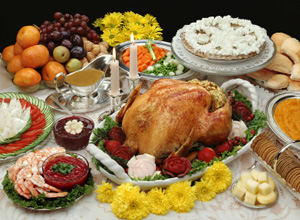 So, back in Boston, the theocratic council set June 15, 1637, as “a day of thanksgiving kept in all the churches for the victory obtained against the Pequods, and for other mercies.”

Please pass the turkey, mashed potatoes and gravy. Oh—sorry. You’re fasting and repenting. Carry on, then.