The great New England quake of 1638


The Hutchinsonians (followers of Anne Hutchinson’s religious faction) had been in Portsmouth, Rhode Island, for about a month after having been exiled from Massachusetts Bay Colony. On Tuesday, June 1, 1638, at 2:00 pm, when New England was enjoying a lovely, sunny day, an earthquake struck New Hampshire, Massachusetts, Connecticut, and Rhode Island. The epicenter was in New Hampshire, and of about 6.5 - 7.0 magnitude, according to modern seismologists, based on its duration of four minutes. There was a large aftershock about 30 minutes after the main shock, and many more tremors before the earth stilled about three weeks later—just in time for a full eclipse of the moon, which showed itself a dried-blood color on June 25, 1638. 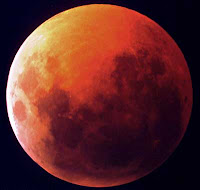 The moon turning to blood is an apocalyptic sign. Revelation 6:12 describes the end-times that the Puritans believed were upon them, "and, lo, there was a great earthquake; and the sun became black as sackcloth of hair, and the moon became as blood."

Another prophecy of the end was in Acts of the Apostles 2:20-21:  “And I will shew wonders in heaven above, and signs in the earth beneath; blood, and fire, and vapour of smoke: The sun shall be turned into darkness, and the moon into blood, before the great and notable day of the Lord come: And it shall come to pass, that whosoever shall call on the name of the Lord shall be saved.”

There are numerous references to sun, moon, and stars in biblical prophecies, as being heralds of "the day of the Lord," the apocalypse, or the second coming of Christ.


Earthquakes and other natural phenomena (comets, eclipses, great storms, famines, epidemics, plagues of pests) were considered to be direct messages from the hand of God, to display his displeasure at human sinfulness. In the case of the 1638 earthquake, those recording the history believed they were of God’s Elect (people set apart to be saved from wrath and hell), so the message must be for someone else—the “someones” who followed Anne Hutchinson in exile to Rhode Island, that’s who! (Between 50 and 75 families, including William and Mary Dyer.) The “someones” who had defied Massachusetts Bay laws to speak and believe as God led them, instead of conforming to the theocratic, autocratic government there. The “someones” who, after repeated “loving demonstrations” of their error, had refused to recant. Well, then, bring on the judgment for those damned heretics!

We have a very good idea of what Anne Hutchinson and Mary Dyer were doing at the time of the earthquake, thanks to Gov. John Winthrop, who tells us that they were having a prayer meeting, as they’d done for several years in Boston. When the quake struck (no doubt amplified by the marshes and liquefied soil of the island, but causing no permanent damage because the settlers were housed in wigwams while building their homes), the Hutchinsonians were convinced that just as on the Day of Pentecost, 50 days after Christ’s resurrection, they were being blessed and honored by the descent of the Holy Spirit, giving them spiritual gifts in confirmation that they were firmly set in God’s will.

Perception of curse or blessing depends on where you stand!

There are several contemporary descriptions of the event.

William Bradford was the governor of the Pilgrims’ Plymouth Colony, Massachusetts.
William Bradford, Morison Edition, Chapter 29, pp. 302-303:
This year, about the first or second of June, was a great and fearful earthquake. It was in this place heard before it was felt. It came with a rumbling noise or low murmur, like unto remote thunder. It came from the northward and passed southward; as the noise approached nearer, the earth began to shake and came at length with that violence as caused platters, dishes and suchlike things as stood upon shelves, to clatter and fall down. Yea, persons were afraid of the houses themselves. It so fell out that at the same time divers of the chief of this town were met together at one house, conferring with some of their friends that were upon their removal from the place, as if the Lord would hereby show the signs of His displeasure, in their shaking a-pieces and removals one from the other. However, it was very terrible for the time, and as the men were talking in the house, some women and others were without the doors, and the earth shook with that violence as they could not stand without catching hold of the posts and pales that stood next to them. And about half an hour or less came another noise and shaking, but neither so loud or strong as the former, but quickly passed over so it ceased. It was not only on the seacoast, but the Indians felt it within land, and some ships that were upon the coast were shaken by it.”

Governor John Winthrop of Massachusetts Bay Colony, who had been extremely ill and nearly died during the month of May, recorded in his journal:


--June 1. Between three and four in the afternoon, being clear, warm weather, the wind westerly, there was a great earthquake. It came with a noise like a continued thunder or the rattling of coaches in London, but was presently gone. It was at Connecticut, at Narragansett, at Pascataquack, and all the parts round about. It shook the ships, which rode in the harbor, and all the islands, etc. The noise and the shakings continued about four minutes. The earth was unquiet twenty days after, by times.


Winthrop also recorded a hearsay account of the earthquake in Rhode Island. He may have received information from Dr. John Clarke, or seen a letter from William Hutchinson to Rev. John Cotton. Winthrop wrote in April 1639:
"On the first of June 1638, there was an earthquake which continued about four minutes and left the earth in an unquiet condition for twenty days afterwards. Mrs. Hutchinson and some of her adherents happened to be at prayer when the earthquake was at Aquiday [Portsmouth, Rhode Island], etc., and the house being shaken thereby, they were persuaded, (and boasted of it,) that the Holy Ghost did shake it in coming down upon them, as he did upon the apostles" [at Pentecost. Easter had been on April 4, so Pentecost would have been on or just before June 1—not that anyone but Catholics celebrated the church festivals at that time!]

Letter from Rev. Roger Williams of Providence, Rhode Island
For his Much Honored Mr. Governor, John Winthrop.
Providence, [June, 1638.]
SIR,—I sometimes fear that my lines are as thick and over busy as the musketoes, &c., but your wisdom will connive, and your love will cover, &c. Two things at present for information. First in the affairs of the Most High; his late dreadful voice and hand: that audible and sensible voice, the Earthquake. All these parts felt it, (whether beyond the Narragansett I yet learn not), for myself I scarce perceived ought but a kind of thunder and a gentle moving, &c., and yet it was no more this way to many of our own and the natives’ apprehensions, and but one sudden short motion. The younger natives are ignorant of the like: but the elder inform me that this is the fifth within these four score years in the land: the first about three score and ten years since [1568]: the second some three score and four years since [1574], the third some fifty-four years since [1584], the fourth some forty-six since [1592]: and they always observed either plague or pox or some other epidemical disease followed; three, four or five years after the Earthquake, (or Naunaumemoauke, as they speak). He be mercifully pleased himself to interpret and open his own riddles, (and grant if it be pleasing in his eyes) it may not be for destruction, and but (as the Earthquake before the Jailor’s conversion) a means of shaking and turning of all hearts, (which are his,) English or Indian, to him. To further this (if the Lord please) the Earthquake sensibly took about a thousand of the natives in a most solemn meeting for play, &c.
ROGER WILLIAMS.

Wonder-working providence of Sions Saviour in New England, Volume 2
By Rev. Edward Johnson
Chap. XII.
OF the great Earthquake in New England, and of the wosnll end of some erronious persons, with the first foundation of Harverd Colledge.
This yeare, the first day of the Fourth Month [June], about two of the clock in the after-noone, the Lord caus'd a great and terrible Earth-quake, which was generall throughout all the English Plantations; the motion of the Earth was such, that it caused divers men (that had never knowne an Earth-quake before) being at worke in the Fields, to cast downe their working tooles, and run with gastly terrified lookes, to the next company they could meet withall; it came from the Westerne and uninhabited parts of this Wildemesse…

Travels in New England and New-York
By Timothy Dwight, 1822
There are eight earthquakes recorded in the history of New England. The first of them was on the 1st day of June, 1638, and is styled by Dr. Trumbull, "a great and memorable earthquake." His account of it is the following:—" It came with a report like continued thunder, or the rattling of numerous coaches upon a paved street. The shock was so great, that in many places the tops of the chimnies were thrown down, and the pewter fell from the shelves. It shook the waters and ships in the harbours, and all the adjacent islands. The duration of the sound and tremor was about four minutes. The earth at turns was unquiet for nearly twenty days. The weather was clear, the wind westerly, and the course of the earthquake from west to east."

Special Publication No. 149
DEPARTMENT OF COMMERCE, U. S. COAST AND GEODETIC SURVEY
E. LESTER JONES. DIRECTOR
EARTHQUAKE HISTORY OF THE UNITED STATES, Exclusive of the Pacific Region
BY N. H. HECK
1638. June 1 or 3. This seems to have been quite a violent shock. At Plymouth, Mass., people had to hold on to objects to keep from falling. Ships at sea were shaken. It was felt in Connecticut and at Narragansett.


***************
This blog article appears as a source to an article of the British Astronomical Association historical section newsletter, Spring 2013. http://britastro.org/history/resources/NewsletterNo6.pdf   “Jeremiah Horrocks and New England,” by Mike Frost.
*************** 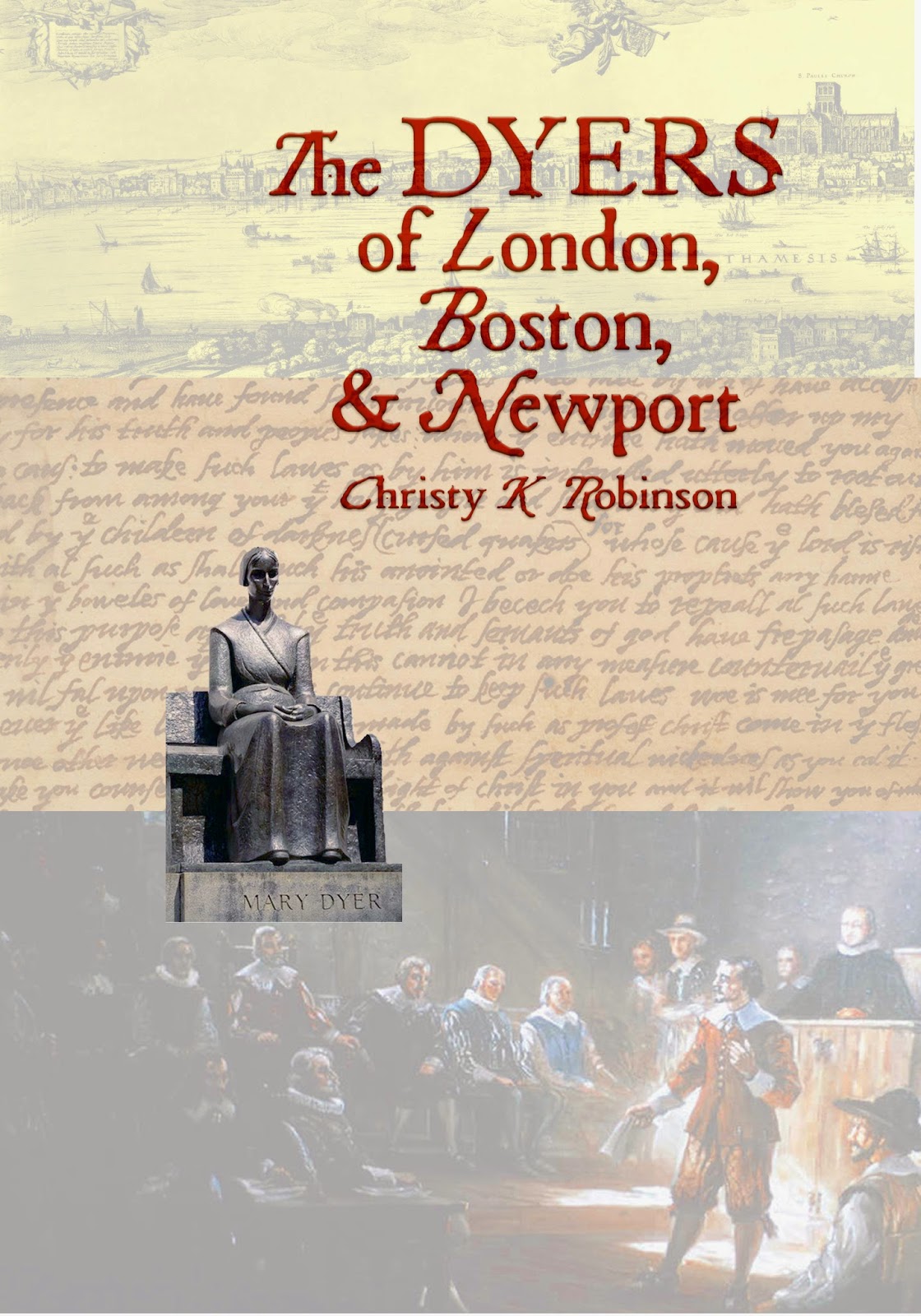 Like this article? Check out my non-fiction book on 17th-century life and times, The Dyers of London, Boston, & Newport, by Christy K Robinson.
Nonfiction, illustrated. The research and recent discoveries behind the novels. The Dyers is a lively nonfiction account of background color, culture, short stories, personality sketches, food, medicine, interests, recreation, cosmic events, and all the "stuff" that made up the world of William and Mary Dyer in the 1600s. More than 70 chapters, and all-new, exclusive content found nowhere else!
Posted by Christy K Robinson