Is there global cooling in our future? Scientists are predicting a period of less solar activity, which could be a sign of temporary cooling, but warn that global warming as a trend is a fact that's here to stay.

Our ancestors survived conditions with considerably less resources than we have available. There was no central heating in their homes and shops, of course, and fuel (peat, coal, and wood) was just as expensive, or more so, as the fuels we consume today. Most people just couldn’t afford the luxury of warmth in winter. They didn’t change clothes or bathe much, especially in cold weather when they’d have to haul and heat water. They shared beds near a kitchen hearth or a chimney column if on an upper floor.

Family size burgeoned during the global temperature dip of the 16th and 17th centuries: maybe the long, freezing nights were not all that boring. Certainly, a number of family members of William and Mary Barrett Dyer had birthdays in September through December. So we can make an educated guess about what happened during the preceding January, February, and March deep freezes. It didn't hurt that the Puritans took the "Be fruitful and multiply" command from Creation very seriously.

The Little Ice Age, from about 1317-1800, began with catastrophic floods, crop failure, and domestic animal deaths (which brought on economic depression), harsh winters—and starvation. Epidemics raged unchecked, and millions died in the plague outbreak in 1348-1350. Because so many laborers (peasants tied to the land, who owed service to their landlords) died, cathedral and castle building ground to a halt for years. It may have begun in an active period of vulcanism in the 13th century that resulted in worldwide ash and dust distribution, which led to rapid climate cooling.

Of course our ancestors knew nothing about it, but they experienced the effects of a plunge in sunspot activity in the 1600s, which corresponded with the coldest years of the Little Ice Age. Specifically during Mary Dyer’s lifetime, 1611-1660, there was the time of famines, waves of plague and other epidemics across Europe, the Thirty Years War, the Great Migration to America, the English Civil War, and the explosion of African slave trade to the Americas and Europe. On America’s east coast, there were harvest failures, starvation, epidemics of smallpox and yellow fever, and pest plagues. Iceland’s ports were ice-bound by miles for several years, and trade and passenger shipping from Europe was forced far south to avoid sea ice. Boston Harbor's sea water froze over for more than a mile out, hard enough to walk on, for two weeks at a time. See "Boston snowpocalypses of 1638" in this blog.

Journal of Governor John Winthrop—January 1638 (when the Dyers were still living in Boston but preparing to move to Portsmouth, Rhode Island):

“About thirty persons of Boston going out in a fair day to Spectacle Island to cut wood, (the town being in great want thereof,) the next night the wind rose so high at N.E. with snow, and after at N.W. for two days, and then it froze so hard, as the bay was all frozen up, save a little channel. In this twelve of them gate to the Governor’s Garden [an island], and seven more were carried in the ice in a small skiff out at Broad Sound, and kept among Brewster’s Rocks, without food or fire, two days, and then the wind forbearing, they gate to Pull-in Point, to a little house there of Mr. Aspenwall’s. Three of them got home the next day over the ice, but their hands and feet frozen. Some lost their fingers and toes, and one died. The rest went from Spectacle Island to the main, but two of them fell into the ice, yet recovered again. In this extremity of weather, a small pinnace was cast away upon Long Island [in Boston Harbor] by Natascott, but the men were saved and came home upon the ice.”

The Little Ice Age “peaked” in Mary Barrett Dyer’s lifetime—the coldest years in many centuries were those she spent in colonial America. This graph shows the severity of winters in Europe and North America from 1000-2000 AD. The absolute coldest period, 1600-1675, coincides with William and Mary Dyer’s life spans.

The Dyers lived in Boston from 1635 to the spring of 1638, then co-founded Portsmouth, Rhode Island, about 60 miles away. One year later, they co-founded the city of Newport, Rhode Island, where they developed a large farm and the seaport.

When Mary Dyer was making a winter trip back to America after several years in England, her ship diverted to Barbados because of severe storms. From a letter written in Barbados on Feb 25, 1657:

“A ship came in hither, which was going to New England, but the storms were so violent that they were forced to come hither, [until] the winter there was nearly over. In this ship were two Friends, Anne Burden of Bristol, and one Mary Dyer from London; both lived in New England formerly, and were members cast out of their [Puritan] churches. Mary goes to her husband who lives upon Rhode Island...”


A NASA website says, “During the coldest part of the Little Ice Age, from 1645 to 1715, there is believed to have been a decrease in the total energy output from the Sun, as indicated by little or no sunspot activity. Known as the Maunder Minimum, astronomers of the time observed only about 50 sunspots for a 30-year period as opposed to a more typical 40-50,000 spots. The Sun normally shows signs of variability, such as its eleven-year sunspot cycle. Within that time, it goes from a minimum to a maximum period of activity represented by a peak in sunspots and flare activity.”

More from NASA: “Between the mid-1600s and the early 1700s the Earth’s surface temperatures in the Northern Hemisphere appear to have been at or near their lowest values of the last millennium. European winter temperatures over that time period were reduced by 1.8 to 2.7 degrees Fahrenheit (1-1.5 Celsius). This cool down is evident through derived temperature readings from tree rings and ice cores, and in historical temperature records, as gathered by the University of Massachusetts-Amherst and the University of Virginia.” 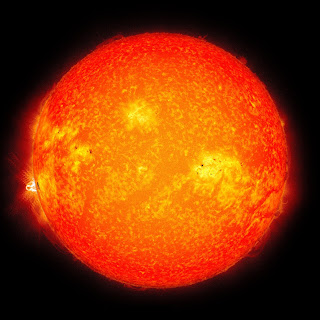 WASHINGTON - The sun is heading into an unusual and extended hibernation, scientists predict. Around 2020, sunspots may disappear for years, maybe decades.

But scientists say it is nothing to worry about. Solar storm activity has little to do with life-giving light and warmth from the sun. The effects from a calmer sun are mostly good.

There’d be fewer disruptions of satellites and power systems. And it might mean a little less increase in global warming. It’s happened before, but not for a couple centuries.

“The solar cycle is maybe going into hiatus, sort of like a summertime TV show,” said National Solar Observatory associate director Frank Hill, the lead author of a scientific presentation at a solar physics conference in New Mexico.

Scientists don’t know why the sun is going quiet. But all the signs are there. Hill and colleagues based their prediction on three changes in the sun spotted by scientific teams: Weakening sunspots, fewer streams spewing from the poles of the sun’s corona and a disappearing solar jet stream.

Those three cues show, “there’s a good possibility that the sun could be going into some sort of state from which it takes a long time to recover,” said Richard Altrock, an astrophysicist at the Air Force Research Laboratory and study co-author.

The prediction is specifically aimed at the solar cycle starting in 2020. Experts say the sun has already been unusually quiet for about four years with few sunspots -- higher magnetic areas that appear as dark spots.

The enormous magnetic field of the sun dictates the solar cycle, which includes sunspots, solar wind and ejection of fast-moving particles that sometimes hit Earth. Every 22 years, the sun’s magnetic field switches north and south, creating an 11-year sunspot cycle. At peak times, like 2001, there are sunspots every day and more frequent solar flares and storms that could disrupt satellites.

Earlier this month, David Hathaway, NASA’s top solar storm scientist, predicted that the current cycle, which started around 2009, will be the weakest in a century. Hathaway is not part of Tuesday’s [June 14, 2011] prediction.

Altrock also thinks the current cycle won’t have much solar activity. He tracks streamers from the solar corona, the sun’s outer atmosphere seen during eclipses. The streamers normally get busy around the sun’s poles a few years before peak solar storm activity. That “rush to the poles” would have happened by now, but it hasn’t and there’s no sign of it yet. That also means the cycle after that is uncertain, he said.

Matt Penn of the National Solar Observatory, another study co-author, said sunspot magnetic fields have been steadily decreasing in strength since 1998. If they continue on the current pace, their magnetic fields will be too weak to become spots as of 2022 or so, he said.

Jet streams on the sun’s surface and below are also early indicators of solar storm activity, and they haven’t formed yet for the 2020 cycle. That indicates that there will be little or delayed activity in that cycle, said Hill, who tracks jet streams.

“People shouldn’t be scared of this,” said David McComas, a scientist at the Southwest Research Institute in San Antonio, who wasn’t part of the team. “This is about the magnetic field and the ionized gas coming out of the sun. It’s a reduction in that, not the light and the heat.”

There are questions about what this means for Earth’s climate. Three times in the past the regular 11-year solar cycle has gone on an extended vacation -- at the same time as cool periods on Earth.

Skeptics of man-made global warming from the burning of fossil fuels have often pointed to solar radiation as a possible cause of a warming Earth, but they are in the minority among scientists. The Earth has warmed as solar activity has decreased.

Andrew Weaver, a climate scientist at the University of Victoria, said there could be small temperature effects, but they are far weaker than the strength of man-made global warming from carbon dioxide and methane. He noted that in 2010, when solar activity was mostly absent, Earth tied for its hottest year in more than a century of record-keeping.

Hill and colleagues wouldn’t discuss the effects of a quiet sun on temperature or global warming.

“If our predictions are true, we’ll have a wonderful experiment that will determine whether the sun has any effect on global warming,” Hill said.
******************************
Emerging from the solar minimum in 2020--article from NASA and NOAA.
Updated Sept. 15, 2020
Solar Cycle 25 is Here. NASA, NOAA Scientists Explain What That Means
https://www.nasa.gov/press-release/solar-cycle-25-is-here-nasa-noaa-scientists-explain-what-that-means/?fbclid=IwAR0l9lvu8YcAhXMDzOycBURmo0UZKBi42xWL9KH1dYUtrzXTe56roYUh9zI