Mary Dyer at Shelter Island: She ever shined in the image of God

After spending the winter of 1659-60 witnessing to her faith on Long Island, Mary Dyer went in the early spring to Shelter Island, thinking to go from there back to Rhode Island. About seven miles in breadth and width, Shelter Island lies between the two peninsulas at the eastern end of Long Island. It was largely owned by Captain Nathaniel Sylvester, one of four wealthy Barbados sugar planters who in 1651 purchased the island from New Haven Colony, intending it as a station for their flourishing triangular trade between England, the West Indies, and New England.[1] Objections to Sylvester’s Quaker sympathies—his close business partner was the Quaker Colonel John Rous and he was married to the sister of William Coddington’s third wife—were not so strong as to bar him from carrying on a profitable commerce with the merchants of New Haven Colony.[2]

At Shelter Island, Sylvester gave succor to traveling and expelled Friends. Lawrence and Cassandra Southwick of Salem came to the island in the summer of 1659 after their harsh treatment at Boston. Being elderly and in frail health, Lawrence made his will and died there the next spring. His wife and yokefellow Cassandra followed three days later. William Robinson, who would die for his faith and principles on the Boston gallows in October 1659, was appointed one of the two overseers of Southwick’s will. No tombstones were erected for the Southwicks—not surprising since early Friends usually did not erect memorials to the dead, giving no nod to worldly vanity.

In 1884 a four-sided monument to the early Friends who had visited the Island was erected in a quiet grove. Each step was inscribed as follows:

When Dyer arrived, she found other Quakers already there and was warmly received. Like Elijah sojourning on the mountain before returning to confront Ahab, she decided to stay, to rest and reflect, waiting for the next clear command from God. A young Quaker, John Taylor, noted her arrival in his journal.

And there came several Friends from other Parts in New-England, to see us: One was Mary Dyer … She was a very Comely Woman and a Grave Matron, and eve[r] shined in the Image of God. We had several brave meetings there together, and the Lord’s Power and Presence was with us Gloriously.[3]

By May, as the days warmed, the osprey nested, the dogwood bloomed, and the gardens brightened with daffodils, lupines, and sweet peas, Dyer’s clear call had come. Her unwanted gallows reprieve last October enabled the Bay magistrates to avoid the only two choices she hoped to press upon them: repeal the bloody anti-Quakers laws or hang Mary Dyer. Furthermore, the reprieve allowed the magistrates another opportunity to dissemble about the Quakers. Any appearance of backing down from the tyranny of the Boston magistrates and ministers meant that the Quaker cause would be compromised. Dyer believed she had no choice but to go forward and put her life on the line again. Nothing less than a full revocation of those “bloody laws” could stay her course and spare her life.

__________________________
Johan Winsser has been researching and writing about Mary Dyer for many years. Some of his research is found on his DyerFarm website. Thank you, Johan, for your contributions to Dyer genealogy research, and to this Dyer blog.

In Western culture, we know people with virtue names such as Hope, Faith, Irene, Zoe, and Joy, and those with biblical names like John, David, Jacob, Esther, Naomi, Mary, and scores of others. From ancient times, parents all over the world have named their children with religiously-significant meanings or prophecies in mind, names that would be something to live up to, names that could form a child's character and destiny. Many named their babies after kings, queens, and nobility, or after parents and other family members.

William and Mary Dyer named their children in this manner. William’s father was William, Mary’s brother was William (which means her father was probably William), and they named their firstborn William. He died within a day or two of birth, and a later son was named William—that one, at age 18, bore the news of Mary's reprieve of execution in 1659, and later was mayor of New York. They named one son Samuel (“Asked For”), another son Charles after the recently-executed king, another son Henry (probably after Sir Henry Vane), a daughter Mary, and a son Mahershallalhashbaz. Oh, yes! It was shortened to Maher, but the name was bestowed based on Isaiah 8:4, after the death of their friend and mentor, Anne Hutchinson.

Only in the last few hundred years have children been named for popular figures or in an attempt to make unique sounds or word combinations.

In the late 16th and throughout the 17th centuries, the Reformation gained ground in England, and splintered further when non-conformists insisted on “purifying” the Church of England. There was a large pocket of Puritans (as one branch of non-conformists was known) in Essex, and they tended to name their children with virtue names. I found a list of jury men in a PDF, with given names, followed by a comma and their surnames.

Thousands of Puritan emigrants to New England came from Essex, including Governor John Winthrop of Massachusetts Bay Colony. So many of them left England with money and possessions that the government of King Charles I believed that the English economy would fail. Eight ships were stopped in the River Thames in 1634, and the emigrants were prohibited from leaving. Among the passengers was Oliver Cromwell, bound for Connecticut—who would make war on the royalists in less than 10 years, and have King Charles beheaded in 15 years.

The Puritans of England and America—self-described as the Remnant or Elect in the book of Revelation— thought that the “world” was evil and they were living in the last days (indeed, deadly plagues and famines, religious wars, economic depression, and vicious crime regularly swept Europe), and Jesus would come in his second advent, in their lifetime, to take them to heaven and destroy the earth. Some of their names reflect that apocalyptic expectation: Return, Hope For, Redeemed, The-Lord-is-Near, and Wayte-a-While. Most of the Puritan emigrants to New England believed that the civilization they’d build would be a New Jerusalem, and these faithful ones would be hastening the Second Coming with their passion for perfection in keeping Old Testament laws. That was the reasoning behind the marriage of civil and ecclesiastical (blend of state and church) law. It wasn’t enough to live the sanctified life oneself. Oh, no. They were part of a larger community, and the entire community must conform to the law, or God would withhold his blessings, leave them in the dust, and rain down curses. A familiar story in this decade, don’t you think?

Church members were encouraged to report those who didn’t conform, or those who spoke against authorities, which was considered sedition. Hate-Evil, Obedience, and Zeal-for-the-Lord might be appropriate names given by families who believed that. The charge of sedition (for signing a mild remonstrance against the governor and assistants) prompted punishment and exile for about 75 families, including William and Mary Dyer and Anne and William Hutchinson. They purchased Aquidneck Island (later Rhode Island) from the Narragansett Indians and founded Portsmouth in 1638 and Newport in 1639. Massachusetts Puritans scornfully referred to the new colony as the Isle of Error or Rogues Island. 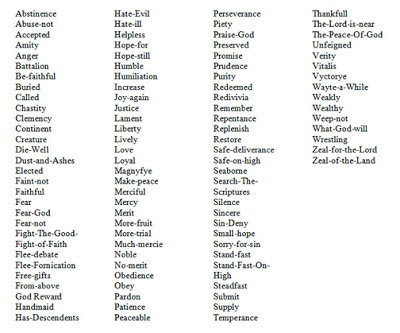 Most of the awkward names faded away with the English Civil Wars, replaced by virtue names such as Purity, Patience, and Faith. The vast majority of names we find in colonial archives and genealogies are what we’d consider “normal” names: names we still use 400 years later.

In the tempest, power


"And Friends, though you may have tasted of the power and been convinced and have felt the light, yet afterwards you may feel winter storms, tempests, and hail, and be frozen, in frost and cold and a wilderness and temptations. Be patient and still in the power and still in the light that doth convince you, to keep your minds to God; in that be quiet, that you may come to the summer, that your flight be not in the winter. For if you sit still in the patience which overcomes in the power of God, there will be no flying. For the husbandman, after he hath sown his seed, he is patient. For by the power and by the light you will come to see through and feel over winter storms, tempests, and all the coldness, barrenness, emptyness. And the same light and power will go over the tempter’s head, which power and light were before he was. And so in the light standing still you will see your salvation, you will see the Lord’s strength, you will feel the small rain, you will feel the fresh springs . . ."

Thanks to the Hay Quaker blog by Ray Lovegrove, for this lovely quote and provision of the artwork.

George Fox, 1624-1691, was founder of the movement Society of Friends, which came to be called Quakers. Mary Dyer was "convinced" of their beliefs in the 1650s, and gave her life to stop the deadly persecution of Quakers in New England.