For educators and students 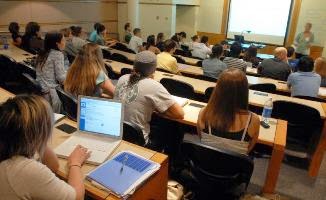 Educators in social studies, history, civil rights, women's studies, politics, religious liberty, and literature should take note of the resources available in this website. These are some of the elements included here, based on several years of research before the site was begun in August 2011, in the development and writing of The Dyers series, and many articles since. In this site, you'll discover many aspects of mid-17th-century English and early American culture. Although some of those subjects are listed on this page, you should also make use of the search function (top-left of the page) and the archived articles list (left menu).

Christy K Robinson, author, freelance writer, and blogger, is available to lecture on Mary Dyer at schools, colleges, book discussions, churches, and community groups in the southwestern United States. She is also an expert freelance writer for magazines, newspapers, and websites. To discuss her modest fees and schedule a date, please email her.


Top Ten Things You May Not Know About Mary Dyer
Eleven (yes, because there's a bonus) major facts about Mary Dyer, some of which come from Robinson's research in English and American archives that brings the first light in 360 years to many facets of the Dyer-Hutchinson-Winthrop story.

Life in England and New England in the mid-1600s:

Prison and punishment in the New World
Boston's prison in the mid-1600s Grandparents-in-Law, the Quaker Connection

Educator endorsements of The Dyers series by Christy K Robinson

Dr. Rondi Aastrup, high school English department chair, wrote:
As a high school English teacher, I am always looking for books to add to my reading lists—for myself and my students. Back in the 90s I was teaching in a Boston suburb and found a collection of essays about the history of intolerance in America that included the story of Mary Dyer. My students were fascinated by the first story particularly—“The Silencing of Mary Dyer”—since many of them lived in Boston where the story takes place. I've been including it in my "Beginnings" unit every since.Now, I teach clear across the country and have brought Mary’s story to my students in Arizona. Again, they found the story interesting, but recently, it became all the more real to them when an alumna of our school published two books about her ancestor: Mary Dyer!

I immediately contacted Ms. Robinson and asked her to come share Mary’s story along with the research and writing process involved in writing a historical novel. I then bought and read the books and proceeded to be impressed at the turn of each page. This well-researched, well-written two-volume story of an amazing and inspiring woman, her husband and family, along with a large cast of supporting characters, acquaints the reader with those who contributed substantially to the freedom of religion that every American citizen enjoys, regardless of their belief. Ms. Robinson has brought to life a time and place that I, as a long-time student of American literature and history, enjoyed thoroughly, and enjoyed even more sharing with my students, who responded with interest as well. They didn’t have to grow up in Boston to be able to see and understand Puritan Boston’s terrain—geographical or theological. Ms. Robinson painted the picture clearly and accurately, on every level. She even corrects some long-held misconceptions about Mary Dyer.
We all came away with a deeper appreciation for those who lived so long ago but whose life-actions had far-reaching consequences.

Good reads for every age, Ms. Robinson’s books can now be found on this teacher’s American Literature book list. I will recommend them with enthusiasm and pleasure for years to come.

Charles Barber, high school history and English teacher, wrote:
Christy has done an incredible job of bringing life in 1600s England and New England to life in her historical novel Mary Dyer Illuminated. I wish that she had written this book years ago when I was still teaching high school history classes. The depth of information that she weaves into her story-telling makes it easier for us to understand the struggles of life nearly four hundred years ago. Christy's gift includes bringing the issues of religious freedom and the rights of women to the center of her story.

For most of us, if we knew anything about Mary Barrett Dyer, our knowledge was limited to the fact that she was a Quaker who was hanged in the Puritan-controlled Massachusetts Bay Colony. Her story is so much more than that, and Christy brings Mary's full story to life. Along the way, Christy weaves in excellent explanations of the nuances of the theological, political and economic issues of the day. She helps us understand the difficulties in creating a new civilization in New England. But none of this interferes with her telling Mary Dyers' story.

For those of us who have ancestors from the seventeenth century New England, Christy brings these people to life and gives us a chance to understand the issues that they faced daily. I heartily recommend this book to anyone who is interested in the issues of religious freedom and the rights of women. Those who want a better understanding of founding of the colonies in New England will also be satisfied.

In her second volume about Mary Dyer, Christy focuses on Mary's personal struggles with her faith and marriage. For those of us who have lived in the 20th  and 21st  centuries, it is difficult to understand how Mary could be so committed to her religious evolution. Among Christy's gifts in telling the story is her ability to put us inside Mary's mind as she gives up her roles of wife and mother as her religious convictions become the sole focus of her life. Her descriptions of the oppressive policies of the colonial leadership should make us all thankful for what the Dyers and Roger Williams created and defended in Rhode Island.

I heartily recommend both volumes for readers from junior high on up. Social studies teachers should read these books so that they can better explain the struggles that created and preserved our freedoms. Our understanding of this era, its leading figures and the challenges that they faced is forever enriched by what Christy presents in these books.

Dr. Ken Horn, minister, educator, and international magazine editor, wrote:
You can’t read just one. You need to read both these volumes!

I took Christy Robinson's novels about Mary Barrett Dyer with me on an international trip and devoured them both. Mary Dyer Illuminated and Mary Dyer: For Such a Time as This became more than time-passers; they became delightful page-turners. I approached each opportunity to press further in Mary’s saga with eager anticipation.

I confess that I seldom read fiction. But Christy’s writing is just the ticket for someone like me. I like to learn when I read, and these works, presented on a framework of reliable, detailed history, provide abundant worthwhile information to be gleaned … and in an incredibly entertaining way. I felt the time I invested in reading the set was well spent. Though I was familiar with the main points of Mary’s story, Christy’s compelling narrative greatly aided in removing Mary from the realm of murky history and making her a real person to me. This groundbreaking individual’s important story deserves the kind of treatment the author has afforded.

Christy’s books will appeal to three kinds of readers: (a) lovers of historical fiction, (b) lovers of history, well written, and (c) lovers of good novels. I fall into category B. These books really fill the bill for history lovers, primarily because of their meticulous research and integrity—including a scrupulous disclosure of elements that had been added or condensed for the purpose of enhancing the narrative.

I appreciate this sophisticated historical approach, with its refined attention to detail. Add world-class wordsmithing to the mix and the result is a page-turning delight.

These are fascinating books that deserve a much-expanded exposure. They are simply outstanding, a feast for lovers of history and good writing.