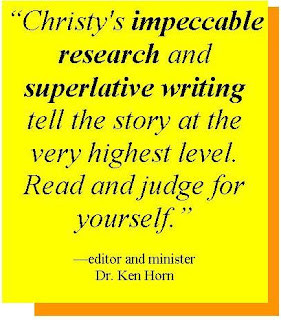 Click the following highlighted, colored links to go to the book pages on Amazon.com. The books and e-books are available worldwide in all Amazon stores. If you'd like to order 10 or more copies, signed by the author, for gift-giving, please use the contact form to message the author, at
http://www.christykrobinson.com/contact.html

These books tell the personal story of the beginning of democracy and civil liberties in North America. The exciting narrative unfolds through the eyes of Mary and William Dyer, Anne Hutchinson, Governor John Winthrop, and Sir Henry Vane. The events and people were real, the conversations are fiction. You'll be overwhelmed by the scope of this major work. The books run between 330 and 390 pages, and are described by readers as "chewy," so they're well worth the money. Other books about Mary Dyer that have been on the market over the last 20 years are outdated and obsolete. Here, you'll find the author has incorporated new research in primary documents discovered in New England and British archives.

Historical/biographical fiction about Mary and William Dyer, 1651-1660,
based closely on detailed research of actual events, with an epilogue that spans another 50 years to include their associates and their children.

by Christy K Robinson
Kindle edition Amazon price $6.99
Paperback edition 320 pages, $12
Nonfiction, illustrated. The research and recent discoveries behind the novels. The Dyers is a lively nonfiction account of background color, culture, short stories, personality sketches, food, medicine, interests, recreation, cosmic events, and all the "stuff" that made up the world of William and Mary Dyer in the 1600s. More than 70 chapters, and all-new, exclusive content found nowhere else!


Synopsis:
Mary Barrett Dyer, 1611-1660, was comely, dignified, admired for her intellect, and known in the court of King Charles. But how did she become infamous in England and America as a heretic who gave birth to a monster? Were she and her mentor/friend Anne Marbury Hutchinson responsible for curses falling on colonial New England in the form of great earthquakes, signs in the heavens, and plagues? What possessed the ultra-righteous Governor John Winthrop to exhume her baby before one hundred gawkers, revile her in his books, and try to annex Rhode Island to get its exiles back under Boston’s control? In Mary Dyer Illuminated, follow William and Mary Dyer from the plague streets and royal courts of London to the wilderness of America where they co-founded the first democracy of the New World 135 years before the Declaration of Independence. They were only getting started.
In the second of two volumes, Mary Dyer: For Such a Time as This, the Dyers return to war-torn England and their lifelong association with Sir Henry Vane, and lay a foundation for liberty that resonates in the 21st century. Why did beautiful, wealthy Mary Dyer deliberately give up her six children, husband, and privileged lifestyle to suffer prison and death on the gallows?
The two novels are compelling, provocative, and brilliantly written, blending historical fact and fiction to produce a thoroughly beautiful work you won't want to put down. The author has reconstructed a forgotten world by researching the culture, religions, and politics of England and America, personal relationships, enemies, and even the events of nature, to discover who they were.


I can personally vouch for Christy's wonderful and well researched books, and cannot give her enough high acclaim. I have all of her books and I highly recommend them! (and they have amazingly beautiful covers!). Her books on Mary and William Dyer are ones I will read, and refer to, over and over. I didn't know about her other two upcoming book projects... I know they will be equally as fantastic as the ones she has already finished and I will again be fighting the crowds to be first in line for one of each!

I belong to a religious tradition that values the contributions of women. The weekly magazine I edited for nearly eighteen years published an annual women's edition and many other articles about women—both clergy and lay—who excelled in ministry and community service. Many women have followed Mary’s grand example, mostly on a far smaller scale. Few have had such lasting influence.

I discovered that my ancestry includes two of the most influential Christian women in American history: Mary Dyer and Mary’s friend and mentor Anne Marbury Hutchinson, who made her own significant contribution.

This Dyer blog has provided a rich source of reliable information about my ancestor Mary. I also discovered another rich, and enjoyable, source. I took Christy Robinson's novels about Mary Barrett Dyer with me on a recent international trip and devoured them both. Mary Dyer Illuminated and Mary Dyer: For Such a Time as This were both page-turners for me.

I seldom read fiction, but Christy’s writing is presented on a framework of reliable, detailed history, so there is abundant information to be gleaned … and in an entertaining way. I felt the time I invested in these books was well worthwhile. Christy’s compelling narrative greatly aided in making Mary a real person to me. These are fascinating books that deserve a much-expanded exposure. They are simply outstanding, a feast for lovers of history and good writing.

***** (rated five stars) “Mary Barrett Dyer is one of very few 17th-century women who are remembered today. She is usually described as a Quaker hanged in the cause of religious freedom, but genealogists and historians know there is much more to her. Christy K Robinson brings the Dyers to vivid life for the rest of us, weaving superb fiction with what is known into a penetrating novel. Robinson’s research is flawless, and her engaging characters invite you into their brilliantly imagined world. Brava!”
From university professor Dr. Margaret Foster Christian: