Clothing fashions during the Dyers' lifetime--part 1

This post is the first of two, on fashions of the early and mid-17th century, during the lifetimes of William and Mary Barrett Dyer and Anne and William Hutchinson. I tried to cover the various social strata, whose type of clothes were prescribed. For instance, shoe height had to be low for the poorer sorts, and gowns or men's boots had to match their station.

Since Mary and William Dyer were respected and in a higher merchant class, as well as William's social status as colonial attorney general, they wouldn't be wearing court dress of the aristocrats, but they'd be very well turned out with fabrics, colors, and ornaments like collars and hats.

When they moved from London to Boston, they probably wore more sober Puritan dress, but even so, it would have been of high quality, with laces and quality boots to show their status and educational level. But for some years, there were no riding horses or carriages, so most people, even Gov. John Winthrop, walked for miles in sunshine, rain, or snow.

When they moved to Rhode Island, they would have added clothing that would be practical for their farming and sailing activities, though they certainly would have had servants and laborers to do heavier chores than feeding poultry or milking goats. Of course, William would have had courtroom clothes (and possibly a wig), and Mary would have dressed plainly when she became a Quaker in the 1650s. Plain doesn't mean shabby, though--unless you think of living in the same clothes for weeks or months at a time while in prison. She was still expected to maintain a dress standard to honor her husband's social and professional status. There's no evidence that she was criticized for immodesty or dressing too poshly or poorly, so she must have found the right balance.


I have available 10 (now only three, so hurry and order!)  two-volume sets of my biographical* novels, Mary Dyer Illuminated and Mary Dyer: For Such a Time as This, that I will personalize for you or your gift recipient.

The retail (unsigned) price on Amazon is $20 each, plus shipping. But I will sign and ship them to US addresses as a pair, for $36 postage paid.

The story is told in two volumes because having researched Mary Dyer for years, I couldn’t write her story without her extremely remarkable husband, William Dyer. No one has written of his accomplishments until I did, perhaps because he was overshadowed by Mary’s famous death.

At the end of the second volume, there’s a nonfiction section that ties off the stories of all the characters and the Dyer children, and discusses what happened after Mary’s execution on the Boston gallows in 1660.

Additionally, there are 13 copies of a companion volume, the nonfiction The Dyers of London, Boston, & Newport, that I will sign and mail to US addresses for $14.

And my book Effigy Hunter, which is a gallop through abbeys, priories, and country churches of England and France (and a few European countries) in search of stone or brass effigies of your medieval ancestors, is also available for signing. I have five copies in stock. For a description and reviews, see http://bit.ly/EffigyHunter .

HURRY! I only have these few books on hand, and they go first-come, first-served.

*What is a biographical novel?  Among my author colleagues, it's defined as a book that's been researched as a biography, but with dialogue and scenes included (necessarily called fiction), and some deep thinking about what motives passed through our subjects' minds that moved them to their larger-than-life events. The 1994 book, Mary Dyer, Biography of a Rebel Quaker, by Ruth Plympton, was a biographical novel, in that she speculated on a number of events and included the notion that Mary Dyer was the child of royalty--which had been soundly refuted by historians 50 years before Plympton dredged it up again. 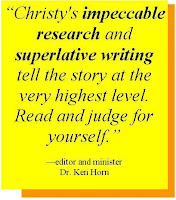 In the case of these Mary Dyer novels, I researched hundreds of modern and 17th-century books, medical papers, epidemiology, astronomy, climate and weather, John Winthrop's books, journals and letters of the time, tavern ballads, the theology position papers of John Cotton and Roger Williams, the court records of Anne Hutchinson's trials, short genealogies of every character, English and Dutch maps of the era, information on the Native Americans around Narragansett Bay, the culture of white, Native, and African slavery, the records of the English secretary of state and spymaster, and many other fascinating documents--and then wrote Mary's and William's story without it being an info-dump, or for the villains to be flat cartoons instead of fleshed-out human beings.

Thank you for your support!
Christy K Robinson

I was saddened to learn today of the passing of a friend of several years, Carolina M Capehart.


Carolina was a food historian and hearth-cooking expert, who could be relied upon for good advice in research and writing on foods, menus, and cooking in the 17th-19th centuries. I sometimes consulted her for my Dyer research and for this blog.

Over the seven years I knew her online, she was a frequent presence on the Mary Barrett Dyer profile, and she commented often in this blog.

I tried to convert her to the joys of green chilies, even mild ones, but she would have none of it. There was no way she'd adulterate her corn pudding with a nice, juicy pasilla or Anaheim diced in.

"I'm pretty much stuck in my ways," she said. "Besides, I'm too old to start experimenting now! LOL oy."

Carolina said "LOL oy" a lot. It was like she’d hit her funny bone on the table. She also ruefully cussed with "Dagnabbit."

Carolina was an actress in her youth, and as an adult was a historical reenactor or interpreter. She taught hearth-cooking and fed samples to countless thousands of people in historical houses or battlefields, Colonial Williamsburg, and other places.

She wrote to me, “I always follow a recipe from an historic cookbook. The other thing is...I don't cook...as in modern cooking...it's Stouffer's frozen entrees for me! Or 5 Guys. Or KFC popcorn chicken. Maybe a steak now 'n then. YUM! The only way to go. I may render my own lard, but I sure ain't gonna spend much time cooking my own meals.”

Her friends don't know why she passed, and might never learn, for her Christian Science denomination doesn't talk about illness and death, and there's no post from a relative on her Facebook page. I had messaged her and didn't receive an answer, but assumed she was taking a break from Facebook.

If you have an interest in historic cookery, visit Carolina's blog. She was an excellent writer (don't judge by our informal messages above). https://firesidefeasts.wordpress.com/about/

So as you think about your ancestors and how they might have lived, how they cooked and what they ate, think kindly of Carolina and remember her.