Americans United, a religious liberty advocacy group, celebrates Women’s History Month, and I am honored that they posted my article on MARY BARRETT DYER (1611-1660) at their “Wall of Separation” site <http://bit.ly/MaryDyerOnAU>. 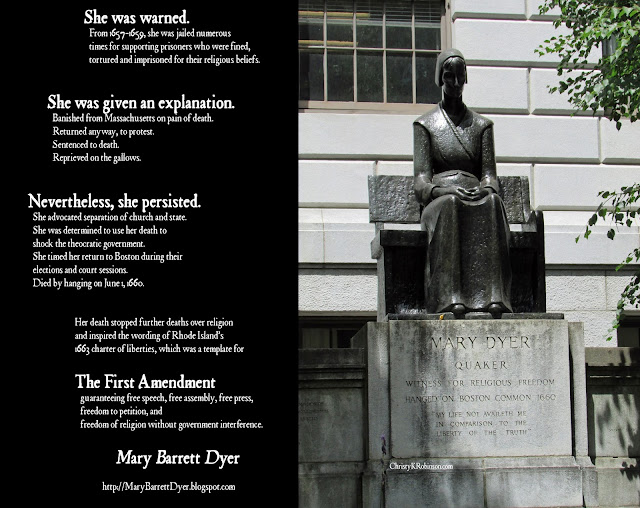 Though Mary Dyer was a deeply religious woman, she understood the life-and-death importance of liberty of conscience and the separation of church and state as a human right and protection of all believers and nonbelievers, from government imposing a narrow belief system or particular morals upon every person or group.
Article as it appeared in Americans United's site:


March marks Women’s History Month, and we’re recognizing the important role that women have played in fighting for the separation of church and state and religious freedom – an impact that’s often been overlooked despite our nation's history of discriminating against women on the basis of religion. The way that we document history, the sources we save and the voices we privilege make it seem as though there are not many women who have played prominent roles in the fight for religious freedom in the United States. Of course, this is not the case. Women were integral in the fight for church-state separation, and, thankfully, we have evidence about the contributions of many of them.
Today we’re featuring a guest blog on 17th century religious freedom martyr Mary Dyer by Christy K. Robinson, who has written four books on Mary and William Dyer and Anne Hutchinson.

Mary Dyer was an unusual woman for her times. Raised in London to parents lost to history, she was, unlike most women of her era, well-educated and could converse on traditional “men’s” subjects. She could also write, which not all men could do.

She married William Dyer in 1633, and they joined about 35,000 Puritans in the Great Migration to Boston in 1635. The Massachusetts Bay Colony was a theocratic state governed by Puritan ministers and magistrates who were far more zealous than English Puritans. Religion permeated the colony’s laws. Those who committed adultery were subject to hanging, and members were encouraged to report on their neighbors for the purpose of purifying the church and greater community. Puritans were known to drop in on other members and quiz their children on their catechism. The Massachusetts Bay founders believed that religious error or dissent from their dogma was treasonable.

Puritan rule was challenged by Anne Hutchinson, who turned Massachusetts on its ear by teaching Bible studies in her home. She emphasized the New Testament covenant and salvation by grace, in contrast to the adherence to Old Testament laws. Mary and William Dyer knew Hutchinson and were involved in her religious and political movement in Boston. William even signed a remonstrance against the government on her behalf. Just before he had his civil rights revoked, Mary, who was pregnant, gave birth to a stillborn fetus in October 1637. Historical sources say the infant girl had anencephaly and spina bifida. The following year, after Mary Dyer publicly supported Hutchinson when Hutchinson was excommunicated, word got out that Mary was the mother of “a monster.” The fetus was exhumed, and it was pronounced God’s judgment on her heresy.

Forced to leave Boston, Dyer and her husband co-founded both Portsmouth and Newport, R.I., with William taking an active role in government, including being appointed first recorder, first secretary of state, first attorney general and a naval official. Rhode Island formed the first democracy disconnected from ecclesiastical control. From 1635-50, Mary Dyer bore six children, all of whom lived to adulthood.

In 1652, William Dyer was sent to England to secure a new charter of liberties and a naval commission. Mary accompanied him and while there she became “convinced” as a Quaker.

Quakers were not popular in England or America because of their criticism of orthodox religion, their radical behavior in disrupting churches and because they encouraged women to testify and preach. In 1656, the first Quaker missionaries arrived in southern New England. They were arrested, tortured, suffered confiscations of their farms and then tried in court. When they challenged the magistrates by asking what law they’d broken, the theocrats hastily created laws after the fact.

Dyer knew exactly what she was coming home to in 1657. Wanting to take a stand for her religious convictions, she intentionally sailed for Boston where her Quaker beliefs were likely to be challenged instead of heading for Rhode Island, a haven for religious nonconformists. The Massachusetts assistant governor promptly cast her into prison because of her Quaker beliefs.

Over the next two and a half years, Mary was jailed several times for civil disobedience. Surrounding colonies banished her “on pain of death” if she returned. Nevertheless, she persisted. The authorities didn’t want to hang her and create a martyr, so she was released several times. They hanged two Quaker men in 1659 and went so far as to prepare Mary for hanging as well before announcing a reprieve – a move they likely thought would scare her.

If that was the authorities’ plan, it failed. In May 1660, Dyer returned to Boston and visited the prison to show support for the Quakers inside. She was arrested and tossed into a cell as well. The authorities told her that if she stopped speaking out, they would let her go. She refused.

On June 1, 1660, Mary Dyer marched a mile from the prison to the gallows on Boston Neck, with a large militia escorting her. They weren’t there to protect Mary from the mob; in fact, many in the crowd had sympathy for her. The pikemen and musketeers were there as security for the government officers and ministers who reviled Dyer. There she was hanged.

Mary recognized her duty to speak to oppression, and to the torture and imprisonment of her fellow believers. Her death was reported to King Charles II, who wrote an order forbidding capital punishment for religious belief. Two years later, he ratified a new, groundbreaking charter (which William Dyer had a hand in) for Rhode Island, guaranteeing religious freedom and liberty of conscience.

As the Massachusetts theocracy withered away, the Rhode Island model of religious freedom became one of the templates for the U.S. Constitution 130 years later. Other countries have modeled their constitutions and rights on those of the United States: These liberties have become global.

Mary Dyer’s death was not in vain. 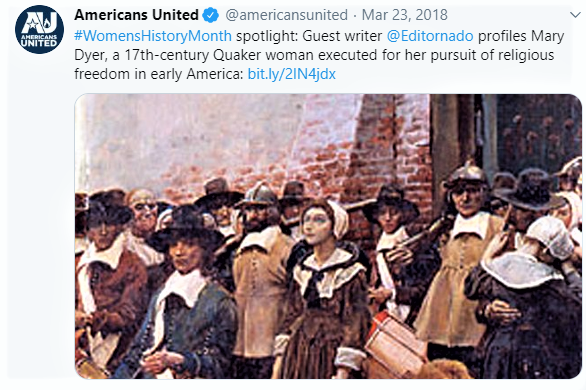 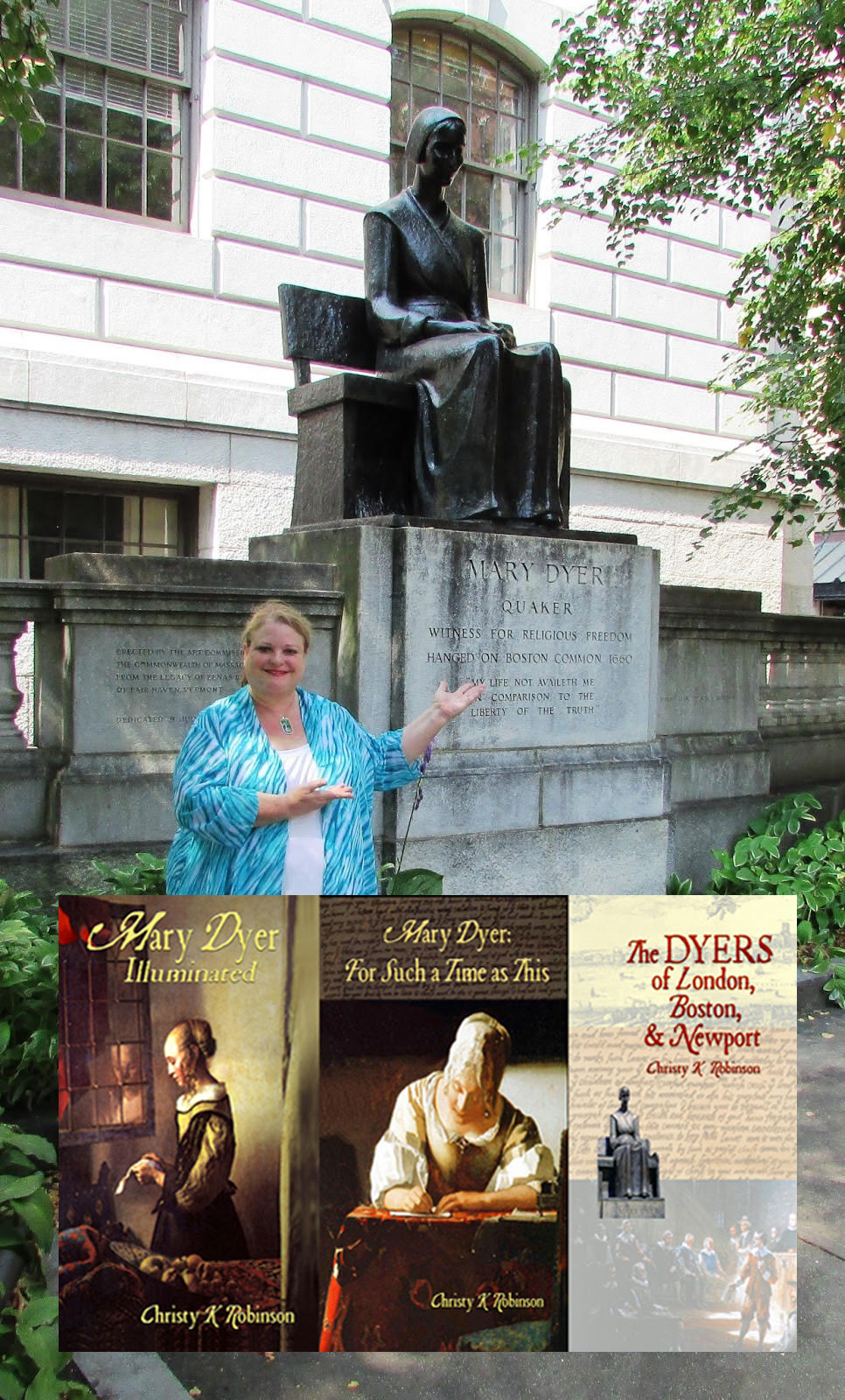