Chance to win a free e-book of Mary Dyer Illuminated

Go to The Review blog <--- (click that highlighted link) to see their very nice review by Kristie Davis Dean, of Mary Dyer Illuminated, and leave a comment there (not here) for a drawing to win a free e-book that can be read on Kindles and other devices with the Kindle reading app*.

Don't want to wait that long? You may go directly to Amazon for the paperback or Kindle edition.
Paperback, 390 pages. $19.99 (Amazon discounts this price to just less than $18)
Kindle edition Amazon price $7.99

*Click the graphic below to get the reading app for your computer, tablet, or smart phone.

Adding insult to injury--Boston justice in 1639


Edward Palmer, a carpenter, came to Massachusetts Bay Colony in 1630 in the Winthrop Fleet with 700 others. As the English settlers followed, perhaps 35,000 of them over the next 10 years, there was a building boom, and Palmer was surely kept busy with building houses and shops, machines like looms or mills or spinning wheels, or furniture, or perhaps working in the shipbuilding trade.

The colony was ruled as a theocracy, basing their laws on the Old Testament, and combining ministers and magistrates as rulers. In addition to the obvious laws about adultery, fornication, stealing, and lying, one could be punished in the stocks for cursing, drunkenness, and speaking against the authorities. The iron "bilbo" they'd brought from England, which was a bar with movable shackles and padlocks, was worn out from regular use or broken/rusted and needed a replacement. Iron was expensive to ship from England, and wood was plentiful in Massachusetts, so a carpenter, Edward Palmer, was commissioned to build a stocks for Boston.

He charged them £1 13s. 7d. for the wood and his labor in building the stocks.

That's about 23 days' labor in carpenters' wages if the wood was free, but it probably wasn't, and I don't know the cost of the wood. Of course, he'd have to hand-hew the lumber into the wood pieces of proper size and shape, and fasten them with nails or iron clasps, and affix locks. Also, the stocks would require a platform on which to seat or stand the prisoner. So Palmer's job was not an afternoon in the workshop with power tools.

The first client for the new instrument of punishment was, ironically, Edward Palmer, who was "fyned £5 & censured to bee sett an houre in the stocks."

Five pounds' fine was about $45 in today's money, but if you look at it in terms of carpenter's wages in 1639, the fine was about 128 days' worth of dawn-to-dusk labor.

It appears that after Palmer's expert work, he was stiffed for the expenses and labor, and fined for his pains. Boston still got its new stocks and made five pounds on the deal, and Palmer had the dubious honor of being the first man to demonstrate the proper use of the device.

Boston, 1639. Edward Palmer was employed to build the stocks (a place in which to set criminals for punishment); when completed, he presented his bill of £1. 13s. 7d. This was thought to be exorbitant, and poor Palmer got placed in his own machine, and fined five pounds. The next year Hugh Bewett was banished, "for maintaining that he was free from original sin."  A Chronological History of the Boston Watch and Police: From 1631 to 1865, By Edward Hartwell Savage, 1885.

Incidentally, Hugh Bewett went to Rhode Island, where he was elected as the colony's first Solicitor General in 1650, and Providence's first police sergeant in 1651. In 1652, he was accused and tried for treason, but was acquitted on December 25. 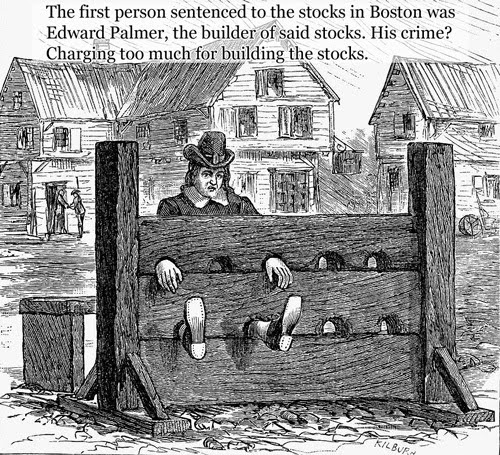 In addition to this incident, the only Edward Palmer I could find in records was a man on a Massachusetts commission with John Winthrop Jr., Joseph Dudley, and other first-generation immigrants, that disputed the Rhode Island boundary with Connecticut and Massachusetts in 1683, and sent a petition to the King. If that was the same man, he would have been in his 70s. But Edward was a common name, and there were many Palmers in New England by then.

If you enjoy the articles and images in this blog, you'll love this book about life in England and New England in the 17th century, The Dyers of London, Boston, & Newport. It's full of anecdotes about famous people like John Winthrop, Anne Hutchinson, and the amazing Dyers, but also people and events that have been forgotten for 350 years. Paperback and Kindle.