Gervase Markham’s book, The English Housewife, was published in 1615, when Mary Barrett (Dyer) was a small child, just the age to have to watch carefully around the large kitchen hearth with its multiple hot spots for roasting, baking, and boiling. She would have been raised to a familiarity with cooking for a household of adults, children, and servants.

We don’t know if she merely had an introduction to hearth cooking in order to supervise servants, or if she performed the work herself. But when the Dyers moved from London to new Boston in late 1635, and set up their home, they might have been short-handed until they were more firmly established. The chores for the colonial settlers were endless: candle-making, soap-making, beer brewing, food and herb gardening, domestic animal feeding, milking, and slaughter, cleaning, sewing and weaving, preparing summer food for winter storage, and a multitude of other tasks. 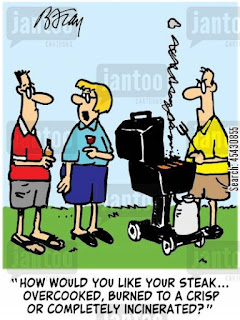 A look at Markham's barbecue lessons reveals that not much has changed in 400 years. Who doesn’t take primal satisfaction in food cooked over a fire, from steaks to S’mores to mystery-meat hot dogs? Vegetarians and vegans like a slight char on their vegetable skewer. People still love a barbecue meal, whether it’s a holiday party on the patio, or a sit-down in the restaurant.

From The English Housewife, by Gervase Markham, 1615.

On Carbonadoes
Charbonadoes, or carbonadoes, which is meat broyled upon the coals (and the invention thereof was first brought out of France as appears by the name) are of divers kinds according to mens pleasures; for there is no meat either boyled or roasted whatsoever, but may afterwards be broyled if the master thereof be disposed, yet the general dishes which for the most part are to be carbonadoed, are a breast of Mutton half boyled; a shoulder of Mutton half roasted, the legs, wings, and carkasses of Capon, Turkey, Goose or any other fowl whatsoever, especially Land fowl.

What is to be carbonadoed
And lastly, the uttermost thick skin which covereth the ribbs of beef, and is called (being boyled,) the Inns of Court Goose, and is indeed a dish used most for wantonness, sometimes to please the appetite, to which may also be added the broyling of Pigs heads, or the brains of any fowl whatsoever after it is rosted and drest.

The manner of Carbonadoing
Now for the manner of Carbonadoing, it is in this sort; you shall first take the meat you must Carbonado, and scotch [score or cut deeply] it both above and below; then sprinkle good store of salt upon it, and baste it all over with sweet butter melted; which done, take your Broyling-iron, I do not mean a Grid-iron (though it be much used for those purpose) because of the smoak of the coals, occasioned by the dropping of the meat, will ascend about it, and make it stink: but a Plate iron made with hooks and pricks, on which you may hang the meat; and set it close before the fire, and so the Plate heating the meat behind, as the fire doth before, it will both the sooner and with more neatness be ready: then, having turned it, and basted it till it be very brown, dredge it, and serve it up with Vinegar and Butter.

Of the toasting of Mutton
Touching the toasting of Mutton, Venison, or any joynt of Meat, which is the most excellentest of all Carbanadoes, you shall take the fattest and the largest that can possibly be got (for lean meat is less of flavour, and little meat not worth your time:) and having scotcht it and cast Salt upon it, you shall set it on a strong fork, with a dripping pan underneath it, before the face of a quick fire, yet so far off that it may be no means scorch, but toast at leasure; then with that which falls from it, and wiht no other basting, see that you baste it continually, turning it ever and anon many times and so oft that it may soak and brown at great leasure, and as oft as you baste it, to oft sprinkle Salt upon it, and as you see it toast, scotch it deeper and deeper, epecially in the thickest and most fleshy parts where the blood most resteth, and when you see that no more blood droppeth from it, but the gravy is clear and white, then you shall serve it up either with Venison sauce, with Vinegar, Pepper, and Sugar Cinnamon, and the juyce of an Orange mixt together, and warmed with some of the gravy.

Christy K Robinson is the author of The Dyers trilogy of books and Kindle ebooks. They chronicle the greatest people of the Great Migration: Mary and William Dyer, John Winthrop, Anne Hutchinson, Edward Hutchinson, Katherine Scott, Henry Vane, and many others. For links to these five-star-reviewed books, click HERE.
Posted by Christy K Robinson No comments: