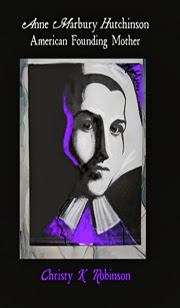 Like this article?  More great anecdotes about mid-17th century England and New England, supported by research, can be found in the nonfiction paperback and ebook The DYERS of London, Boston, & Newport, by Christy K Robinson. It's the third in a series about Mary Dyer, Anne Hutchinson, Sir Henry Vane, Roger Williams, and John Winthrop. The Dyers is a lively nonfiction account of background color, culture, short stories, personality sketches, food, medicine, interests, recreation, cosmic events, and all the "stuff" that made up the world of William and Mary Dyer in the 1600s. More than 70 chapters, and all-new, exclusive content found nowhere else!
Posted by Christy K Robinson 5 comments: 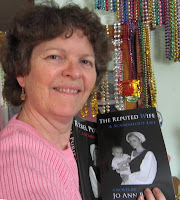 Jo Ann Butler is a naturalist, archaeologist, genealogist, and author of two historical novels set in Rhode Island during the lives of William and Mary Dyer: Rebel Puritan, and The Reputed Wife. Visit her website to learn more or to purchase the books, available in print and e-book.
Posted by Christy K Robinson 3 comments: