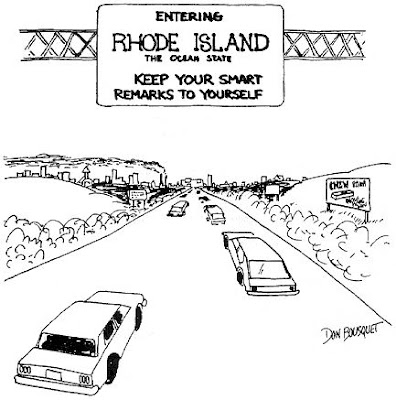 When the religious dissidents left (or were exiled from) Massachusetts Bay Colony in early 1638, they went first to the small town of Providence Plantations on the Seekonk River to meet with another dissident, Roger Williams, who had helped them negotiate with the Indians. Then they went on another few miles to the beautiful wooded island they’d purchased from the Native Americans during the extremely harsh winter when the Boston women were preparing to move their households (children, servants, household goods, domestic animals), the men were selling properties in Massachusetts and surveying and exploring their new island and Narragansett Bay, Mary Dyer was recovering from her traumatic miscarriage, and Anne Hutchinson was under house arrest in the home of one of the richest, most strict Puritans in New England, Joseph Weld.

The island was called Aquiday or Aquidneck (“the floating mass” or “island”), and the town they founded at the north end was first called Pocasset, the native name for “where the stream widens.”

Within two years of settlement, the island was The Isle of Rhodes or Rhode Island, and the town officially became Portsmouth.


The city and harbor of Newport, Rhode Island were founded and surveyed in 1639 by, among others, William Dyer. The deep-water harbor became the second-largest harbor and commerce center in New England after Boston, and traded in molasses and rum, horses and lumber, ship-building, food for the Caribbean plantations—and slaves. It was a center for smuggling and piracy. Mind you, Boston was no City Upon a Hill when it came to the same trade goods, piracy, and human trafficking, but Rhode Island had a bad reputation from the very beginning because of its religious tolerance and its rejection of a church-state government.

There were other names for the first colony to encode full religious liberty as law:
Rogues Island
The Isle of Error
Asylum to evil-doers.
The sink into which the other colonies empty their heretics.
The sink-hole of New England
The licentious republic.
Rude Island
The receptacle of all sorts of riff-raff people.
Caeca latrina.

Reverend, Pious and Learned Fathers and Brethren in Christ: —
Your letter of May 26th last, (1658,) came safely to hand.
…The raving Quakers have not settled down, but continue to disturb the people of the province by their wanderings and outcries. For although our government has issued orders against these fanatics, nevertheless they do not fail to pour forth their venom. There is but one place in New England where they are tolerated, and that is Rhode Island, which is the caeca latrina of New England. Thence they swarm to and fro sowing their tares.

The letter went on to complain about a Lutheran minister that they didn’t like interfering with their Reformed churches and people.
Source: (Abstract of, in Acts of Deputies, Jan, 13, 1659. xx. 391.) https://books.google.com/books?pg=PA433&lpg=PA433&dq=caeca+latrina&sig=JVSVCS9zqu10HXu_CjS95XKfnYo&id=U3EAAAAAMAAJ&ots=2P2AE1C-z2&output=text

The Classis, and indeed the Netherlands government, was very tolerant of various religions in their country and colonies. The Reform church was prominent, but they tolerated Jews, Catholics and Protestants, Lutherans, Musselmen (Muslims), and English Separatists like the Pilgrims who came from England and later moved to Plymouth, Massachusetts. And Rev. Megapolensis himself had redeemed a French Catholic missionary who had been captured by the Mohawks of the Hudson River Valley. But it seems they had no tolerance for Quakers (like Mary Dyer) or rogues (like her husband, the privateer)! In the mid-1660s, New Netherland gave over control of their colony to the English and it was named New York, after James Stuart, Duke of York. Who was one of the first mayors of New York City in the 1670s? None other than William Dyer the Younger, the son of Mary and William Dyer. Few of my readers saw that coming!

What did the Dutch Reformed ministers mean by calling Rhode Island a caeca latrina? Caecum, in 17th century anatomy, was the colon or rectum (they used the term interchangeably). Latrina was the public toilet or sewer used by a military barracks. So the epithet of caeca latrina meant, basically, the outdoor toilets for feces, a.k.a. “number two” or “poop.” (One could go on, but surely you’ve heard other slang terms.)

***********
Christy K Robinson is the author of this award-winning blog and books on the notable people of 17th century England and New England. Click the links to find the books.