Silence is golden, but the bridle is ironic

A sketch of the young Quaker, Dorothy Waugh

The 1650s were times of great upheaval in political and religious circles. England had still not recovered from the horrors of its Civil Wars of the previous decade. Tens of thousands of men had died in the battles, from sickness more than wounds; their women and children left at home were starving on the farms and many left for the larger cities—where their fates were not much different in regard to starvation and mortal illnesses. Several Christian sects, the Quakers foremost among them, were heavily persecuted with excessive fines, imprisonment, beatings, brandings, and disfiguring ear removal.

William and Mary Dyer sailed back to England in late 1651 or early 1652, on business for Rhode Island. William went back to Rhode Island; Mary stayed in England. She stayed until early 1657, and during those four years, became convicted of the principles of the Friends, who were "reproachfully" called Quakers. It’s not known if Mary Dyer and Dorothy Waugh ever met in England, but they did meet in Rhode Island and Boston in 1657 and 1658.

The young, unmarried Dorothy Waugh had been a housemaid in Preston Patrick, a village in northwest England between Carlisle and Lancaster, and was a convert to the Quaker movement. There was a Friends group in that out-of-the-way village: George Fox, during his journeys in the northwest, encountered a group of religious dissenters in the area known as the Westmorland Seekers, and they were convicted of the gospel as Fox taught them. Fox allowed women to speak and preach. Most other schools of thought and theology were still blaming Eve for eating the forbidden fruit, and were holding her responsible for all humanity being driven from the Garden of Eden. Women were to keep silent not only in church, but in every public place.

Dorothy had little or no education, as only higher-status women were taught to read and write. But she had enthusiasm and energy, and as some Quakers described it, the "fire and the hammer," and soon she was giving her testimony and preaching the repentance of sinful ways, as she wandered England from London to Cornwall to Yorkshire. Quaker histories say that she was whipped (which would have left her horribly scarred) and jailed numerous times all over England. Did she walk everywhere, travel with a group, or work her way through the countryside for food and wagon rides?

Not much is known of Dorothy’s life outside of a few incidents in England and New England, but she’s famous for her description of what it was like to be “bridled” or “branked.” A bridle was a metal cage that was locked over a woman’s head, with a bit (possibly spiked) pressing down on her tongue so she couldn’t speak. It had been invented in medieval times to punish women who scolded their husbands or otherwise disturbed the social order, and it was meant to reduce a woman’s status to that of a tamed farm animal. The ability to speak distinguishes humans from beasts, but with this apparatus, a woman was forced to be as silent (“dumb”) as an animal. 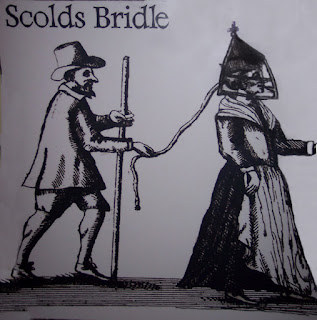 When a woman was bridled, she was led about the town on a chain and whipped, or secured to the village cross, and was then open to the abuse of refuse or dung thrown at her, or of people urinating on her. The infliction of a bridle may reveal more about the men who did it than about the women who endured it: the men were insecure in their power when women claimed divine revelation, interpreted scripture, or preached. They believed that women who stepped out of their appointed place brought chaos and God’s judgment.

Dorothy had a taste of the bridle in 1655, in Carlisle, near the English border with Scotland.

"Dorothy Waugh, for declaring Truth in the Streets of Carlisle, and testifying against Sin and Wickedness, was, together with Anne Robinson who accompanied her, committed to Prison by the Mayor, who ordered an Iron Instrument of Torture, called a Bridle, to be put upon the said Dorothy’s Head, which they kept on about two Hours: And some time after having the like Iron Instrument put on both their Heads, which prevented their speaking to the People, they were publickly led through the Streets, and exposed to the Scorn and Derision of the Rabble, and then turned out of the City."
Source: AN ABSTRACT OF THE SUFFERINGS Of the PEOPLE call’d QUAKERS.  FOR THE Testimony of a Good Conscience, From the TIME of Their being first distinguished by that NAME, Taken from Original Records, and other Authentick Accounts. VOLUME  I. From the Year 1650 to the Year 1660.  LONDON: Printed and Sold by the Assigns of J. Sowle, at the Bible in George Yard, Lombard-street, 1733. 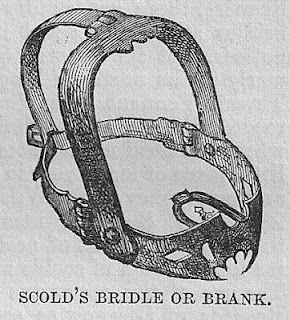 A year later, before Dorothy joined other Quakers on the tiny missionary ship, Woodhouse, on its voyage to New England to proselytize, Dorothy gave an account of her experience in a pamphlet anthology called The Lamb's Defence Against Lyes. (1656)

The [Carlisle] Mayor 'was so violent & full of passion that he scarce asked me any more Questions, but called to one of his followers to bring the bridle as he called it to put upon me, and was to be on three houres, and that which they called so was like a steele cap and my hatt being violently pluckt off which was pinned to my head [so her scalp was probably torn when the hat was yanked off] whereby they tare my Clothes to put on their bridle as they called it, which was a stone weight of Iron [about 14 pounds], & three barrs of Iron to come over my face, and a peece of it was put in my mouth, which was so unreasonable big a thing for that place as cannot be well related, which was locked to my head, and so I stood their time with my hands bound behind me with the stone weight of Iron upon my head and the bitt in my mouth to keep me from speaking; And the Mayor said he would make me an Example... Afterwards it was taken off and they kept me in prison for a little season [hours? days? weeks?], and after a while the Mayor came up againe and caused it to be put on againe, and sent me out of the Citty with it on, and gave me very vile and unsavoury words, which were not fit to proceed out of any mans mouth, and charged the Officer to whip me out of the Towne.'

When Dorothy Waugh came to Rhode Island and Massachusetts Bay in 1656, she partnered with another missionary named Sarah Gibbons. They traveled on foot to Salem, Massachusetts, about 60 miles, and slept in the woods along the way, surviving a March blizzard and fierce winds. They were allowed to preach for two weeks without arrest; but deciding it was too tame or too lax there, they went to Boston to “look your Bloody Laws in the Face.” Once there, they were jailed for three days with no food, publicly whipped (wherein they were stripped to the waist), starved for another three days, then banished to Rhode Island.

Dorothy and Sarah traveled to Hartford, Connecticut, were arrested and banished, and in 1658, joined four other Quakers on a ship bound for Barbados, presumably to preach there. But not much is known of Dorothy after the late fall of 1658 in Barbados. She must have sailed home to the north of England. A genealogical site email document says: "She died as Dorothy Lotherington in Whitby, on the Yorkshire coast, her husband, William, a fellow Quaker."

Nothing, including a barbarous bridle, could silence her when the cause of God was so precious.
Posted by Christy K Robinson