Lady Katherine Dyer and the epitaph to her beloved husband

In 1641 Lady Katherine Dyer erected in the church of St Denys in Colmworth, Bedfordshire, a large, ornate tomb to the memory of her beloved husband, Sir William Dyer, who died twenty years earlier at age 38. It is composed of prostrate statues of Sir William and Lady Katherine Dyer and below them, between the carved figures of Faith, Hope, and Charity, smaller statues of their seven surviving children and one grandchild, who died in infancy.

Inscribed on the tomb is the following remarkable epitaph.

If a large hart, joined with a noble minde
Shewing true worth unto all good inclin’d
If faith in friendship, justice unto all,
Leave such a memory as we may call
Happy, thine is; then pious marble keepe
His just fame waking, though his lov’d dust sleepe.
And though death can devoure all that hath breath,
And monuments them selves have had a death,
Nature shan't suffer this, to ruinate,
Nor time demolish’t, nor an envious fate,
Rais’d by a just hand, not vain glorious pride,
Who'd be concealed, wer’t modesty to hide
Such an affection did so long survive
The object of ’t; yet lov’d it as alive.
And this greate blessing to his name doth give
To make it by his tombe, and issue live.

My dearest dust, could not thy hasty day
Afford thy drowzy patience leave to stay
One hower longer: so that wee might either
Sate up, or gone to bedd together?
But since thy finisht labor hath possest
Thy weary limbs with early rest,
Enjoy it sweetly; and thy widowe bride
Shall soone repose her by thy slumbering side;
Whose business, now, is only to prepare
My nightly dress, & call to prayer:
Mine eyes wax heavy & the day grows old,
The dew falls thick, my blood grows cold.
Draw, draw the closed curtayns: & make roome:
My deare, my dearest dust; I come, I come.

Sir William (1583-1621) was the eldest son of Sir Richard Dyer of nearby Great Staughton, Huntingdonshire, and therein closely related to the prominent West Country Dyers that included Sir James Dyer, Chief Justice of the Court of Common Pleas, and Sir Edward Dyer, the Elizabethan courtier and poet. Sir William was an active man who was once called to account for hunting deer in the king’s park and on another occasion was party to a melee in which a man was killed. He was heir to a substantial estate, but owing to the early death of his father and his own youthfulness, came into straightened times that required him to lease and sell off much to meet his obligations.

Sir William’s sister Anne married first the much older Sir Edward Carre of Sleaford, Lincolnshire, and second, Sir Henry Cromwell, cousin to the future Lord Protector Oliver Cromwell. While the ancestry of Mary Dyer’s husband William and his possible relationship to Anne (Dyer, Carre) Cromwell remains unknown, it is notable that Sleaford is adjacent to Kirkby Laythorpe, where William was born, that William did very well on behalf of Rhode Island (and himself) when he appeared before Cromwell’s Council of State seeking a new charter for Rhode Island and a privateering commission; and that Anne’s son, Sir Robert Carre, was in 1664 sent to New England, New York, and Delaware to bring those colonies to the king’s account—and on whose coattails William and Mary’s son William, quickly rose to be customs collector and mayor of New York.

Lady Katherine was the daughter of John D’Oyley of Merton, Oxfordshire, and stepdaughter of Sir James Harrington of Exton, Rutland. “My Dearest Dust” is often attributed to Katherine Dyer, but uncertainly so. It is a beautiful and sophisticated composition, and no other works known to be by Katherine have been identified. Certainly she had the intelligence, family background, and likely private education to write it. But did she, or did she borrow or commission it? Its intimacy—and that she never remarried—argues that she wrote it herself.

Of curious note is the detailed dress of the four Dyer sons portrayed on the monument. Although Bedfordshire and the prominent West Country Dyer families were for the most part royalist, and two of the sons are dressed as such, the other two are dressed as roundheads (Puritan parliamentarians), thus suggesting a sad division in this family.

And how long did Lady Katherine have to wait to join her husband? Thirty-three years.

Read more:
Photos of the memorial effigies  http://www.colmworthhistory.org.uk/#/lady-dyers-poem/4535905977
http://preferreading.blogspot.com/2012/04/sunday-poetry-lady-catherine-dyer.html
http://www.ralphmag.org/DG/dyer.html
English Heritage report on St. Denys church of Colmworth  http://www.british-history.ac.uk/report.aspx?compid=42413&strquery=dyer&fb_source=message   "There is a fine monument in the chancel to the memory of Sir William Dyer, kt., who died in 1621, at the age of thirty-six, and his wife Catharine, daughter and co-heir of John Doyley of Merton, Oxfordshire. It was put up in 1641 by his widow and is of alabaster and black marble, with a canopy having a central arched panel, containing heraldry flanked by scrolls carried by three Corinthian columns. Under it lie, at two levels, the alabaster effigies of Sir William and his wife, both excellent pieces of sculpture, and below on the panelled base, between figures of Faith, Hope and Charity, are four sons and three daughters, standing, their attitudes very effectively varied, their treatment and that of the three symbolic figures being very far removed from the dull, mechanical journeyman's work so often found at the time. At Lady Dyer's feet is a figure of Henry, her grandson, only son of Sir Lodowick Dyer, who died in infancy 22 September 1637. At the back are two large shields: Dyer quarterly impaling Doyley of twenty-three quarterings, and the Doyley coat. Over the columns are three shields showing marriages of the children: Dyer impaling Lozengy argent and gules, Gery impaling Dyer, and on a lozenge Dyer impaling Doyley."
*********** 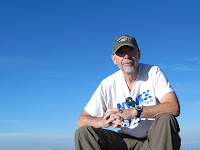 Johan Winsser has been researching and writing about Mary Dyer for many years. Some of his research is found on his DyerFarm website. Thank you, Johan, for your contributions to Dyer genealogy research, and to this Dyer blog.
Posted by Christy K Robinson