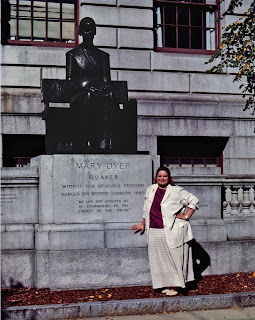 Little did I know when I set out to write a historical novel (part fiction, lots of fact), that I’d come upon so many fantasies, assumptions, and falsities in my heroine’s so-called biographies, or discrepancies in timelines that expose obvious mistakes. Who thought that at least one of two documents thought to be written by her, was not written by her, but significantly changed; and because that happened to the first document, the second one is highly suspect?  Or that much of what is “known” about her came from the highly-politicized and carefully-managed public relations wing of a budding religious movement?

Here’s what can be constructed about Mary Dyer:
She

Why would this Englishwoman of high social status, education, a mother of six, and economically well-off wife of an attorney general, described as beautiful and intelligent, intentionally provoke her own death at age 48 or 49?

Did her religious beliefs make her mentally unbalanced? As you know, religious beliefs, whether conservative, center, or liberal, are complicated. They’re partly about how you live your life in relationship with others and God, and partly what you expect as reward or punishment in the hereafter. For the people of the 17th century, religion was everything. Nothing happened unless God directed it. Life on earth was fleeting, especially when waves of plague, misery, poverty, and war seemed unceasing; but the hereafter was “where it was at.” It was eternal, inevitable—and the only alternative was eternal hellfire.

The American Puritans were much more conservative than those in England, perhaps due to the bitter persecutions they’d experienced prior to their emigration. They combined their civil laws with Old Testament religious laws: Ten Commandments, plus many rules in the Books of Moses that were written specifically for the Israelites during their 40-year wanderings, along with Calvinist beliefs that men had a better chance of heaven than women (because Eve sinned before Adam) and that eternal salvation was only for a relative few that had already been chosen by predestination. How did one know one was part of the Elect who would attain heaven? They never fully knew if they’d be saved, but they showed their desire and intent to God, by keeping the laws, and by making sure that one’s community members also kept the law. This, of course, led to spying and tattling.

American Puritans, then, were fearful of being lost, and frightened of a god as a harsh judge who, despite their lifelong, arduous work of being “good,” had no intention of saving them. When Anne Hutchinson in the 1630s and the Quakers in the 1650s came along saying that by faith in the free gift of God (grace), that God actually loved and desired their love, and that personal revelations of his will for their daily lives had replaced the old written law, people caught in that legalistic hell were attracted to a God of love and light. They could be saved. They would be saved.

This was, in effect, a giant threat to the Puritan judges and ministers because their authority was undermined, they expected chaos from those who felt they weren’t required to keep any laws, their “New Jerusalem” city-upon-a-hill project had failed, and not least: that the lawlessness would bring a royal governor over to administer Anglican and secular affairs, and the magistrates and founders would lose their 1629 charter and their lifelong financial investments in the colony.

In their fear and fury at the Quaker invasion beginning in 1656, New England began making laws (which were contradictory and flimsy and were refuted by Quaker defendants untrained in the law!). The authorities burned books and papers, and arrested Quakers, putting them in prison for months at a time including freezing winters with no heat or light, forcing them to hard labor, feeding them poor rations or starving them, beating them several times a week, whipping (men and women were stripped to the waist in public and flogged), dragging Quakers through three towns and giving them 10 lashes at each town, dragging them at cart-tail out into the wilderness and dumping them barely alive, slicing off the ears, and other punishments. Some families endured these tortures and were fined large amounts of money; when the cash ran out, they lost cattle, horses, and properties, until at one time, a Quaker family’s teenagers were put up for slave auction. Because men vastly outnumbered women in the colonies and the Caribbean, the girl would probably have been doomed to be a sex slave, and the boy would have toiled until he died in the sugar fields. But the ship’s captain would not buy what appeared to be innocent young people for slave trade, and the attempt failed.

By this time, 1659, many Puritan settlers had become Quaker and Baptist sympathizers, sick of the cruelty, avarice, bloodlust, and injustice of their rulers. Some of them were fined and whipped for providing hospitality to Quakers or protesting the unnecessarily harsh penalties. Many of the sympathizers converted to Quakerism within a few months or years.

This is why Mary Dyer insisted on committing what we now call “civil disobedience.” Contrary to what many genealogy web pages say, and several accounts by Quakers of her time, Mary was no poor little victim. “She was hanged for being a Quaker,” they say. Absolutely not! She could have chosen peace, safety, health, and protection in Rhode Island, where her human rights were guaranteed. Instead, she actually sailed past her powerful and respected attorney husband and their six children who would have stopped her, to return to the scene of greatest hate and most malevolent government, and put herself face to face with their “bloody laws,” as Quakers called the system. She intended to rouse public opinion and shame the governor and court into annulling their laws. As Mary was escorted by more than 100 pikemen and musketeers to her first execution scene, she went happily and proudly, knowing she’d accomplished her purpose and would be in heaven in a flash. She didn’t need 100 armed soldiers to keep her from running away, but to keep the crowd from rallying to her rescue and to protect the Boston authorities who were executing a high-status woman, Mary Dyer. Her crimes were about the business of supporting those in prison—a biblical mandate—and disobeying the court by returning to Massachusetts, a misdemeanor in most eyes. The public opinion campaign was working.

After Mary’s 1660 execution by hanging, the early Quakers who wrote Mary’s and other heroic stories composed an appeal to King Charles II, newly restored to the throne, which refuted the Boston magistrates’ defense of their practices. As a result, the King ordered that Boston stop executions based in religion and refer their cases to England for trial.

Mary’s influential husband William was one of the framers of the 1663 royal charter of liberties for Rhode Island Colony. The charter confirmed the principle of separation of church and state, with liberty of conscience to believe, and worship (or not), in the way you choose as long as it doesn’t break the civil law. The Rhode Island charter was a model for the United States Constitution’s first amendment guaranteeing religious freedom and freedom of speech.

So what do you think of Mary Dyer? Was she crazy to leave security and peace to be hanged? Did her choice to be a martyr have any effect on your civil rights? Would you have the courage to face death for a principle—or for people you don’t even know, hundreds of years in the future? Could you do what Martin Luther King Jr, and Mary Barrett Dyer did: own a dream, consider others’ welfare above your own, and commit civil disobedience, even unto death, to further righteousness and justice in this world?

____________
Previously published on Sarah Butterfield’s http://sarahshistoryblog.wordpress.com/  during Women’s History Month, March 17, 2013.
Initially, I intended to write on Mary Dyer's contribution to religious liberty, but realized that the blog’s audience is mostly British and immersed in medieval and Tudor culture. So I wrote it instead as a popular piece, simplifying the complex issues and stripping out the others (including a large group of fascinating people) that were essential to the outcome. Because, you know, that's what journal articles and full-length books are for!
Posted by Christy K Robinson