Over the last several years that I’ve researched William and Mary Dyer for the two novels* and nonfiction e-book* I’ve written about them, I’ve read through countless thousands of images and files, websites, books, PDFs, and sifted both scholarly papers and amateur genealogy pages. Multiply those factors by all the possible spellings of Dyer, Dyre, Diar, Dyar, Dire… and countless times countless equals some discernment and the beginning of knowledge about the Dyers and the culture they were part of.

When my eyes lit upon a 17th-century publication written by William Dyer, my heart beat faster—for a moment. I had discovered “a” William Dyer, but not “the” William Dyer who was married to Mary Barrett in 1633 and widowed in 1660 when she was executed for intentionally and repeatedly disobeying her banishment orders. (I take this opportunity to remind you that she was not killed “for being a Quaker.”)

This other William Dyer was born in 1632 in England (23 years after our William), and would have been twenty, perhaps still at seminary, when our Dyers visited England after the Civil War, when Oliver Cromwell was Lord Protector of the realm. Young Reverend Dyer took up the nonconformist, Puritan, Calvinist mantle when he began his gospel ministry in Chesham and then Cholesbury in Buckinghamshire in the 1650s.

In 1662, with the Act of Uniformity that restored the Church of England to the state religion, thousands of Puritan ministers were expelled from their pulpits in the Great Ejection. The Book of Common Prayer was again used in church liturgy. Reverend Dyer likely lost his employment then and perhaps turned to writing instead of preaching. His best-known work is A Cabinet of Jewels, or a Glimpse of Sion’s Glory, published in 1663.

After the 1665 bubonic plague epidemic killed 100,000 or more Londoners and continued ravaging the rest of the country, there was a massive fire that consumed the old, rickety, closely-built neighborhoods of London. Even St. Paul’s Cathedral, with its ancient monuments and tombs inside, fell to the fire.

In 1665, Rev. Dyer preached at St. Anne’s, Aldersgate Street, London, less than a thousand feet northwest of St. Paul’s. He claimed in his sermons that the plague was God’s punishment on wicked, licentious London, and the next year, obviously before the September 1666 fire, he published the sermons with the title Christ’s Voice to London. (The rest of the sermon was biblically based, logical and persuasive, I thought. What follows, though, is an excerpt where Rev. Dyer must have broken forth with shouting and tears.)
"Oh, London, London! God speaks to you by his judgments, and because you would not hear the voice of his Word, he has made you to feel the stroke of his rod! Oh, great city! how has the plague broke in upon you, because of your abominations! "They provoked the Lord to anger by their wicked deeds—so a plague broke out among them!" Psalm 106:29. Oh, you of this city! how is the wrath of God kindled against you, that such multitudes of thousands have died within your borders, by this severe plague, God's immediate sword! London! how are your streets thinned, your widows increased, and your cemeteries filled, your inhabitants fled, your trade decayed! Oh! therefore lay to heart, you who are yet alive, all these things, and turn from your wicked ways, that the cry of your prayers may outcry the cry of your sins, and be like the city of Nineveh, who believed Jonah's message from God, who humbled themselves, and fasted, and cried mightily unto the Lord, "The Ninevites believed God. They declared a fast, and all of them, from the greatest to the least, put on sackcloth. When the news reached the king of Nineveh, he rose from his throne, took off his royal robes, covered himself with sackcloth and sat down in the dust!" Jonah 3:5-6 Oh, let not the heathen outstrip professing Christians! Did Nineveh repent and turn from their wicked ways—and shall not London?"
What must he have felt when the 1665 plague was followed by a 1666 fire that burned 70,000 people out of their homes and incinerated several square miles of the teeming city.

A Puritan website describes Rev. Dyer as “a godly pastor” of “great piety, and a serious fervent preacher.” They’ve posted the text of some his sermons. 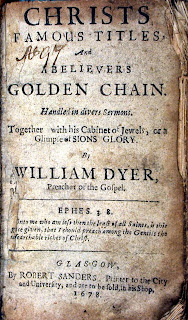 Reverend Dyer’s book Christ’s Famous Titles and a Believer’s Golden Chain (1678) has this paragraph that rings true today. One could apply it to anything that keeps them “busy” and distracted from what is truly important.
“It is the great unhappiness of our age, that the greatest part of men busy themselves most in that which concerns them least. Look into the world among rich and poor, high and low, young and old, and see whether it appear not by the whole scope of their conversations, that they set more by something else than Christ and salvation. So they may have but some of the earth in their hands, they care for nothing of heaven in their hearts, though gold can no more fill their hearts than grass their purses.”

Other books followed, and Reverend Dyer died in 1696, aged about 64. He was buried in a Quaker cemetery in Southwark (London metro area south of the River Thames), so he may have embraced Quaker beliefs at the end.

The moral of my story here is that when you turn your attention to researching historical figures or ancestors, keep in mind that there are hundreds, perhaps thousands, of people who have the same surname, who are probably not closely related, or not related at all. Do some addition and subtraction and decide if dates are logical, or if a woman has given birth to her own grandfather when she was only three years old. (Yes, I found that in a genealogical page!) Until you’ve sorted them out and confirmed dates and locations, you should not make assumptions that this guy must be the same as that guy.
*******


Christy K Robinson is the author of two biographical novels (paperback and Kindle) on William and Mary Dyer, and a nonfiction anthology of her research into their culture: Mary Dyer Illuminated, Mary Dyer: For Such a Time as This, and The Dyers of London, Boston, and Newport.
Posted by Christy K Robinson