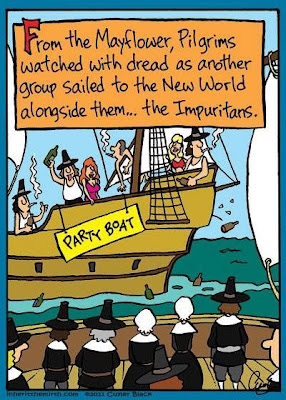 The Pilgrims of Plymouth Colony grew tobacco and brewed their own beer. So did the Puritan settlers of Boston, Salem, and the many new towns that dotted Massachusetts, Connecticut, Long Island, and Rhode Island. There was a “tobacco house” on the Dyer farm in Rhode Island.

Gov.  John Winthrop of Massachusetts Bay and his son John of Connecticut dispensed medicines, some of which were made with “aqua vitae,” also known as whiskey.

Gov. Winthrop, the father, had smoked tobacco until the late 1620s, then gave it up, cold turkey, as a sacrifice to God: he didn't want such a pleasant intoxicated feeling to interfere with his ascetic life before God. Winthrop also stopped the custom of toasting at his own table because it had overtones of pagan libations to the gods.

The Puritans loved their recreation (fishing, hunting, military exercises), but they didn't play football (soccer/kickball). At the time, English football was on par with the Afghan game of goat-head-polo! The teams of young men would kick a leather ball through village streets, down gullies, across hilltops, through fields of food crops--destroying everything, including one another, in their path to gain possession of the ball.

However, we can be quite sure that the Puritans did not hang around in a mixed-gender party boat, wearing undershirts, with the women showing cleavage and uncovered hair.

Here’s an article posted in this blog in 2012 about how New Englanders celebrated Thanksgiving in the early colonial years:  http://marybarrettdyer.blogspot.com/2012/11/how-english-colonists-celebrated.html

And this article shows some of the recipes for foods that would have been eaten in England at the same time period.
http://marybarrettdyer.blogspot.com/2011/11/heart-stopping-meals-of-colonial-new.html