William Dyer (or Dyre, as he wrote it) was a man of many talents and abilities. Trained as a haberdasher/milliner, he arrived in America in 1635 and was soon a property owner. He was clerk of several commissions, and the “Portsmouth Compact” of 1638 is written in his hand. He was part of several trading missions to buy food from the Native American tribes, and he was a surveyor who laid out lots in Portsmouth, and roads and boundaries in Newport. He was the first Secretary of State to Rhode Island’s government, then General Recorder from 1648-1650. During this time, William must have studied law, for he was appointed Attorney General from 1650-53, and was first to hold that title in all of colonial America. He was appointed Commander-in-Chief-Upon-the-Seas by both the English Council of State and the United Colonies in 1652-53, was Rhode Island’s general solicitor in 1665-66 and 1668-69, and secretary to the council in 1669. During that time, he owned a farm which had horses, cattle, and sheep (as we see from various legal actions he filed), as well as tobacco and hay.

As Secretary of State and then General Recorder, William Dyer was responsible for writing the colonial assembly legal actions and records, property deeds, and vital records. See Found! More documents in William Dyer’s hand. He kept the documents in a chest, in a room with four locks. The four keys were kept in the four original towns of Rhode Island, and brought out for court sessions. The official seal of the colony would have been kept with the records.

The first anchor seal in the colony may have belonged to Benedict Arnold (the ancestor of the Revolutionary War Royalist) or Roger Williams. Benedict Arnold had an anchor with his BA initials on either side. When they sent official documents or important letters, they sealed the papers with wax and a seal impression.

It appears (from the book excerpted below) that William Dyer provided an ivory seal with the image of an anchor, and that the seal was used on official documents from 1648 to 1661, then copied for a new seal in 1664. From the description, it's impossible to know how the seal was made, but it's probable that the die of the seal was metal, and the handle of the stamp would have been ivory (walrus tusk from what Gov. John Winthrop called the sea horse). William Dyer was acquainted with Boston silversmith John Hull, who had been his neighbor until 1638, and who co-owned a ship that would be used by privateer Edward Hull in the first Anglo-Dutch war in 1653. John Hull would have the skill required to cast a die. (Has anyone noticed the pun between die and Dyer?)

The Rhode Island seal’s image, an anchor, probably referred to Hebrews 6:18-19, because of their exile from Massachusetts Bay Colony over their dissidence to the theocratic government there. “We have run to God for safety. Now his promises should greatly encourage us to take hold of the hope that is right in front of us. This hope is like a firm and steady anchor for our souls.”

Later versions of the seal have carried the word “hope” over the image of the anchor.  The anchor is a graphic symbol for "hope" (or esperance), and they've been used together for centuries.

The anchor that kept their boats and ships from drifting or being shipwrecked symbolized safety and “home” to the people who had left first England and then Massachusetts over religious oppression. And it was perfect to represent Narragansett Bay, which Rhode Island territories surround, as the second-most important seaport in New England, after Boston.

Following are excerpts from  The seal, the arms and the flag of Rhode Island, by Howard M. Chapin, 1913 (not in copyright). William Dyer is mentioned several times.

In 1647 the four original towns [of Rhode Island and Providence Plantations, including Newport, Portsmouth, Providence, and Warwick] uniting under the Charter, held the first General Assembly, then styled the General Court of Election, at Portsmouth, on the 19th, 20th and 21st of May. At this meeting the anchor was adopted as the official seal.

Mr. Rider says: "No suggestion has come down to us concerning the originator of the idea; but certain records exist in which it became necessary for Roger Williams to use an individual Seal, and the anchor was the device which he used."

The anchor was a comparatively common design on seals of the seventeenth century, both in England and in the Colonies.

In Colonial times seals were scarce, and it was not possible for each person to have his own seal and affix it when he signed a document. Instead, generally only one or two of the leading men in a town owned a seal, and these seals were used promiscuously opposite the signer's names.

It appears from the wording of this resolution that for some reason, perhaps poor workmanship, this seal was not satisfactory.

It is probable that this was the first seal of the Colony of Rhode Island, as it is the first record referring to the actual seal, the design having been specified the preceding May. Doubtless William Dyre, who was at that time General Recorder of the Colony, assumed under the resolve of 1647, the duty of having the seal made, a duty naturally incumbent upon his office, and in his official capacity presented the new seal at the next meeting of the General Assembly, which occurred in May, 1648.

There is no impression of this seal now known [in 1913] to exist.

This seal apparently continued in use as the Colony seal until 1660, when a new seal, which John Clarke had had made in England, superseded it. At the meeting of the General Assembly (General Court of Commissioners), at Warwick, 18th of October, 1660, it was "Ordered, That the General Recorder is Authorized to demaund and Receive the Seale Sent by mr. John Clarke, of mr. Nicholas Easton." (R. I. Col. Rec. orig., p. 100, pr. p. 436.)

There is no impression of this second state seal now known [in 1913] to exist.

At the meeting of the General Assembly, held at Newport March 1, 1664, it was "Ordered That for the presant, the old Seale that hath ben the Seale of the Collony, shall be the presant Seale of the Collony, to be fixed to any Commission that may be granted forth, or any matters of publicke Concearnment and that with what Convenient Speed that may bee, a new Seale be procured." (R. I. Col. Rec, orig p. 132, pr., v. 2, p. ^2.)

What the trouble was that caused the above resolution to be passed we do not know, but it seems safe to assume that there had been both a misuse of seals and a dissatisfaction with the design or workmanship of the [1660] seal then in use. The seal was presumably the second seal, the one that Clarke sent over from England. The expression "Old Seale," however may refer to the Dyre seal, in which case the purpose of the resolution may have been to reinstate the Dyre seal in place of the Clarke seal.

[It may be that the 1648 seal was misused by William Coddington to show his authority when he set himself up as governor-for-life of Rhode Island, and went to England to get his own charter. Roger Williams and William Dyer had to sail to England to sort it out with the Cromwell government and get Coddington's charter revoked. After that, Coddington and Dyer faced off in court numerous times.]

There are several impressions from this seal in the State Archives on papers in the volumes entitled "Proceedings of the General Assembly."

This seal is one and eleven-sixteenths of an inch in diameter. In the centre is an upright foul anchor, with the word "Hope" above it. Surrounding the whole, on a band is the inscription, "The Colnie of Rhode Island and Providence Plantations." Mr, Rider believes that "The attachment of the cable to the anchor was doubtless the work of the designer." Certainly there is nothing in the acts of the General Assembly to warrant the use of the foul anchor.

The seal remained in use until November, 1687, when, according to Arnold's History of Rhode Island, it was broken by order of Sir Edmund Andros [royally-appointed governor of the New England colonies].


In December 1686, Sir Edmund Andros was sent by the English government to govern New England and bring the rebellious colonies into line with English law. Negating their royal charters and breaking their seals was one way of asserting his autocracy. He was overthrown in 1689.

Rhode Island returned to using their own seal in 1690.

The inspiration to research this article came from the discovery of an artist in Newport, Rhode Island, Suegray Jewelry. She crafts seals as pendants and earrings. This is the Etsy page where she sells anchor seals somewhat similar to the Rhode island seal.

Update: in July 2016, I purchased an anchor seal pendant from Suegray, and I wear it often in honor of William Dyer. 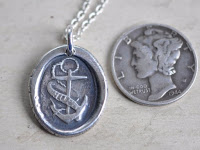