If they had Shark Week in the 17th century

Click the highlights to open a new tab with more information.

I don’t have cable or satellite TV to watch annual Shark Week programs (beginning Aug. 10 this year), but it’s difficult to miss the humorous trailers for the intentionally-bad horror film Sharknado, or see reruns of nature programs on sharks. I remember when Shark Week was only a recurring sketch on Saturday Night Live, known as Land Shark. ("Candygram!")

In a shameless bid for more readers of this 17th-century historical research blog, I’ve had a Sharknado/brainstorm that you might enjoy a bit about how sharks were perceived in the 1600s.

Sharks are well-known in Massachusetts Bay, Long Island Sound, and in Narragansett Bay of Rhode Island, where the Dyers co-founded Newport. But in the years of America’s settlement, there were few accounts or images made of them. Governor John Winthrop wrote about the “sea horse” or walrus of Sable Island, and about the massive cod and halibut they caught off the Isles of Shoals in June 1630. But he didn’t write of sharks, or the archaic word for them, sea-dogs.

*****
In 1606, William Shakespeare refers to the “ravined salt-sea shark” in Macbeth, act 4, scene 1.  Part of the witches’ brew of “bubble, bubble, toil and trouble” was the ingredient of the violent mouth and gullet of a hungry shark.
Scale of dragon, tooth of wolf,
Witches' mummy, maw and gulf
Of the ravined salt-sea shark,
Root of hemlock digged i' th' dark,
…
Add thereto a tiger’s chaudron,
For the ingredients of our cauldron.

*****
In 1634, William Wood, a commissioned public relations writer, published a book, New-Englands Prospect, about the natural wonders of Massachusetts, to encourage Puritan Englishmen to emigrate and make their fortunes. Here’s his description of the shark, amid many other creatures of the land, air, and sea:
“The Sharke is a kinde of fish as bigge as a man, some as bigge as a horse, with three rowes of teeth within his mouth, with which he snaps asunder the fishermans lines, if he be not very circumspect: This fish will leape at a mans hand if it be over board, and with his teeth snap off a mans legge or hand if he be a swimming; These are often taken, being good for nothing but to put on the ground for manuring of land.”

*****
In the whaling business, sharks were a worry to the men processing the whale carcass. They had to work quickly to get the whale dissected and onto the ship, before sharks could devour the valuable whale carcass. And the whale oil on the decks could cause a man to slip and fall overboard to the waiting sharks below.
Source: http://www.whalingmuseum.org/learn/research-topics/overview-of-north-american-whaling/whales-hunting

*****
On Sept. 24, 1641, a hurricane wrecked a convoy of eight Spanish treasure ships in the Florida Straits. When the small tender ship went down 6 leagues (.33 kilometer) off Santiago, Cuba, a priest and other survivors attempted to swim ashore, but sharks ate them all. (I'm not sure who was left to report this detail, however! Perhaps someone on another ship of the convoy?) Vast treasures of silver and gold were soon after recovered from the wrecks; even more riches were recovered in the early 21st century.

Remarkably, on the other side of the Atlantic, one day earlier, the treasure ship Merchant Royall went down 30 miles off Land’s End, Cornwall, England. Though men died, there were no reports of sharks in that incident. 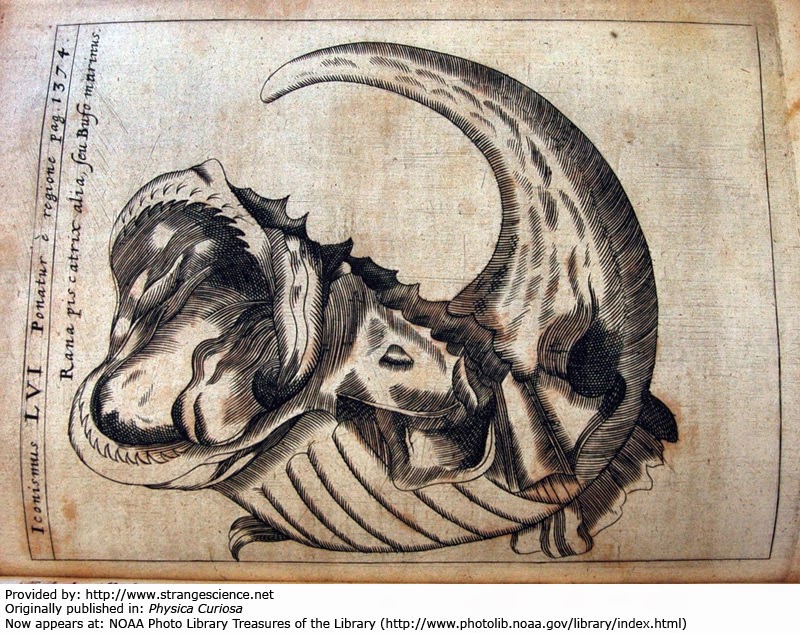 1662
Scientist: Caspar Schott
Originally published in: Physica Curiosa
In his Physica Curiosa, Schott included scores of illustrations, many of outlandish creatures, some closer to reality. What real-life animal might have inspired this illustration isn't easy to guess. It has gills, fringes, and a long curling tail, but the predominant feature is its gaping mouth lined with sharp teeth. The teeth are shaped like those of a shark.
Source: http://www.strangescience.net/stsea2.htm 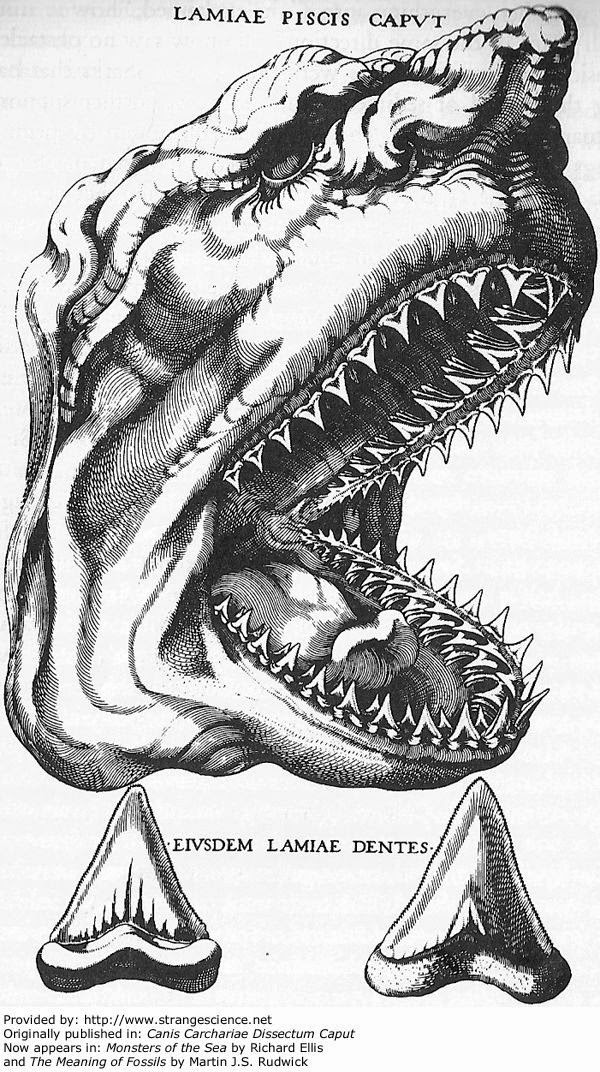 1667
Scientist/artist: Niels Stensen
Originally published in: Canis Carchariae Dissectum Caput
Strange as it looks by today's standards, this picture of a dissected head of a giant white shark actually marked significant progress in marine biology. For years, fossilized shark teeth were believed to be tongues of serpents turned to stone by Saint Paul, and hence were named glossopetrae, or "tongue stones." Niels Stensen correctly identified tongue stones as shark teeth, though he was not the first person in history to do so. In fact, Steno's picture was derived from a 16th-century unpublished work by papal physician Michele Mercati.
Source: http://www.strangescience.net/stsea2.htm 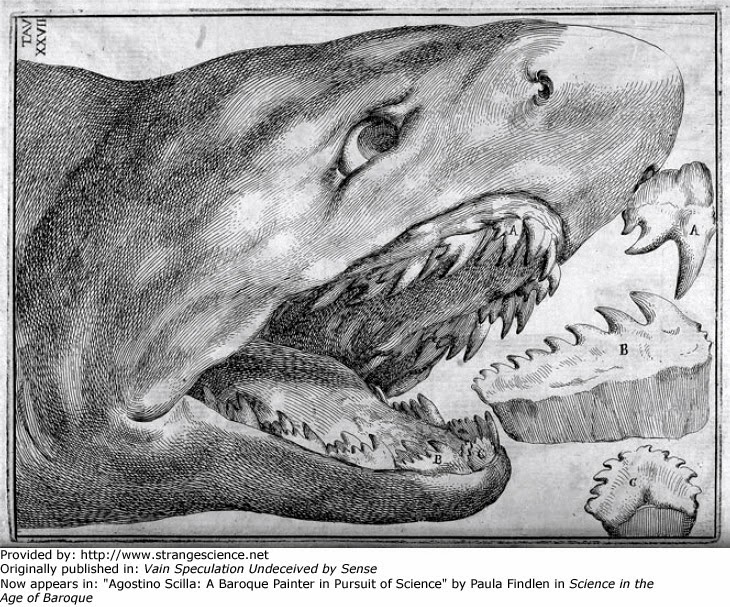 *****
1670
Scientist/artist: Agostino Scilla
Originally published in: Vain Speculation Undeceived by Sense Baroque
Although Steno's depiction of a dissected shark head was a step forward in scientific accuracy, Scilla felt he could improve upon Steno's work. Scilla was an accomplished painter and a coin collector. He believed—and informed his readers—that his experience in these fields gave him insights into fossils and other natural specimens that others could not. Where others perhaps saw uniformity in sharks and their teeth, Scilla saw individuality. He delivered detailed depictions to different kinds of sharks, including a hammerhead, advancing accuracy even a little further than Steno.
Source: http://www.strangescience.net/stsea2.htm 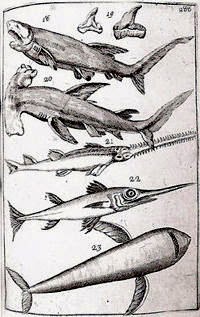 1709
Scientists/artists: Athanasius Kircher and Filippo Buonanni
Originally published in: Musæum Kircherianum
The 17th-century German Jesuit polymath Athanasius Kircher established a fabulous museum in Rome. These fish carcasses and shark teeth must have looked outlandish to the visitors to Kircher's museum, but fish like these swim in the sea today. After Kircher died, Buonanni took over his collection and published a catalog in the early 18th century. These images from the catalog show some 18th-century progress in accurately depicting sea life.
Source: http://www.strangescience.net/stsea2.htm