If you’re a frequent reader of this blog, you know that Mary Dyer was a woman who believed and lived in the Light of God. Because she believed in eternal life, death was nothing to be feared—in fact, she willingly laid down her own life to bring religious liberty to the oppressed.

However, Mary and William Dyer lived in an extremely superstitious, hyper-religious, brutal era. It wasn’t only the individuals who might have been cursed by a witch, but the entire community that feared them. Educated and illiterate people alike believed that their theocratic society as a whole had to purge evil, and to be pure and holy, which would hasten the Second Coming of Christ. (Why do you think the village of Naumkeag was renamed Salem? It was the New Jerusalem, the holy city of God.) Boston was to be “The City Upon a Hill” in Gov. John Winthrop’s sermon, that term taken from Jesus’ Sermon on the Mount. They believed that God demanded perfection of them before he could trust them not to pollute the Holy City in heaven.

On the European continent in the early 17th century, 30,000 innocent men and women were burned to death, believed to be witches. In England, hundreds of people, almost all them women, were tried, tortured, and hanged as witches, even though they were church members minding their own business. Midwives and healers were susceptible to accusations of witchcraft. If your patient recovered unexpectedly, or died, it must be because of the intervention of the devil.

In America, witch trials and executions took place 50 and 60 years before the famous Salem outbreak, in Connecticut and Massachusetts.

The Puritan Americans didn’t officially believe in ghosts because spirits went immediately to heaven or hell—but they did believe in ghosts, because Gov. John Winthrop wrote of spirits haunting the place where a ship had blown up because some drunken sailors shot a pistol into kegs of gunpowder.


“Captain Chaddock [Englishman who had previously stolen a French ship] having bought from the French a pinnace of about 30 tons, he manned and fitted her to go to Trinidad, and riding before Boston ready to depart, and eight men aboard her, one striking ...fire with a pistol, two barrels of powder took fire and blew her up: five of the men being in the cabin were destroyed, and the other three being in the other part were much scorched and hurt, but got into their boat and were saved. The captain himself was then on shore at Boston. It is observable that these men making no use of the sudden loss of three of their company, but falling to drinking, etc., that very evening this judgment came thus upon them. It is also to be observed that two vessels have thus been blown up in our harbor, and both belonging to such as despised us and the ordinance of God amongst us.”


Governor Winthrop usually saw the wrath of God in disasters that befell “unrepentant sinners” such as these. But there’s more! About two weeks later, unexplained lights appeared in the sky where the ship had been.

“About midnight, three men, coming in a boat to Boston, saw two lights arise out of the water near the north point of the town cove, in form like a man, and went at a small distance to the town, and so to the south point, and there vanished away. They saw them about a quarter of an hour, being between the town and the governor's garden. The like was seen by many, a week after, arising about Castle Island and in one fifth of an hour came to John Gallop's point.”

Rev. Davenport of New Haven reported that a ghost ship appeared in the clouds as a message from God that their ship, their investments, and of course, their beloved family members who were passengers, had been lost at sea. Read The Ghost Ship of 1647


Every natural history event (comet, meteor, eclipse, earthquake, severe weather) was considered a message from God, or manifestation of a curse on unbelievers. (But that’s never been limited to the 17th century: after catastrophic earthquakes and tsunamis, we’ve heard people talk about the devastation being the judgment of God upon unrepentant pagans. I had to edit sermons and articles of that false teaching at one point in my career.) 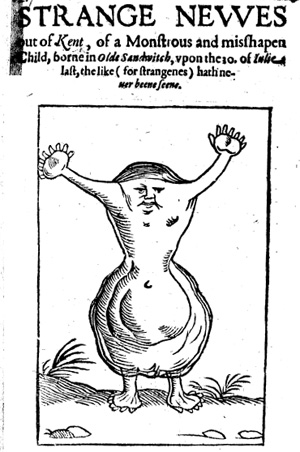 Neither Anne Hutchinson nor Mary Dyer were formally charged as witches, but there were murmurs about them, particularly after they both had tragic pregnancies amid charges of heresy. Mary’s anencephalic/spina bifida miscarriage, and Anne’s molar mass were called monsters. There’s so much interest in that, even today, that the “monster” article is the most-read piece in this blog.

Here are the links to my articles about the unknown, unseen world as the Dyers, Hutchinsons, and Winthrops knew it.

The Case of the Surfing Witch

The Ghost Ship of New Haven

There’s more—much more!—in the books Mary Dyer Illuminated (Vol. 1) and Mary Dyer: For Such a Time as This (Vol. 2). The stories of the unexplained phenomena came from the journals of John Winthrop, books, court records, and letters from eyewitnesses of the events. Find out more about the FIVE-STAR REVIEWS by historians, English professors, other discerning readers, and how to order the books at this link: http://marybarrettdyer.blogspot.com/p/blog-page.html
Christmas is coming: these books (or Kindle editions) would make fantastic gifts.