There’s no biography or journal that can describe the boyhood of William Dyer, 1609-1677, but we can learn some details by looking at his background and what he studied as a boy and youth in Kirkby LaThorpe, Lincolnshire, a village and parish about 15 miles west of Boston.

William Dyer’s father (also William) and grandparents may have come from the southern county of Somerset. The father was a yeoman farmer in Kirkby LaThorpe, which means he owned his farm, in contrast to others who rented, and that was a sign of the rising middle class. It may be that even though he wasn’t the firstborn, William senior's parents set him up with a substantial inheritance. Or maybe the money came from a financially advantageous marriage. Why he moved so far is a mystery, unless the land came to him by marriage or distant relationship (see below).

Our William was born and baptized in September 1609. He had an older brother, a younger sister, and perhaps more siblings who were miscarried or died as infants. In 1624, he was apprenticed in London, in a prestigious guild that produced councilmen and mayors for the city of London, and this was no mean accomplishment. So he must have been a worthy student as a boy. Where was he educated? Where did he learn that elegant penmanship that distinguishes his writing from the undecipherable scratchings of his Massachusetts and Rhode Island contemporaries?

Not quite three miles west of Kirkby LaThorpe, where William was born, is the larger town of Sleaford. It was a market and mill town lying near the Great Northern Road built by the Romans, and the Boston Road to the river port that led to the North Sea. After the Norman Conquest, when King William took over the Saxon and Danish holdings, Sleaford and surrounding lands were owned first by appointed barons, and then by the Catholic Church, until the Dissolution under Henry VIII. The church properties (farms, manors, houses) were appropriated by Henry's treasury, and sold off as favors to aristocrats and gentry. The area between Sleaford and Boston was purchased and controlled by the Carre family. And they may have sold a parcel of farmland to William Dyer the elder.

In 1581, during the reign of Elizabeth I, Robert Carre was High Sheriff of Lincolnshire. He’d been treasurer of the army when the Catholics of Northumberland and Durham rebelled against Protestant Queen Elizabeth. Sir Robert was married twice, but had no children. (Robert’s youngest brother, Edward Carre, married for the second time to an Anne Dyer and had three children with her before he died in 1618. There may be a distant relationship between Anne Dyer Carre and our William Dyer, and the Carre family came from Somerset, too, but there’s no proof of a relationship. Dyer was a common name all over England. (If you’re doing genealogy, you need proof. This is circumstantial and does not constitute proof.)

In 1604, in one of many acts of benevolence, Sir Robert Carre founded a school for boys of all the nearby villages, called the Free Grammar School of Sleaford. A hundred-acre estate he’d inherited from his second wife endowed the school, and any excess funds were distributed as alms to the poor. Sir Robert died in 1606. The school has gone through a few tough times in 400 years, but lives today as a boys' school for ages 11-18, Carre’s Grammar School. It's coed in the sixth form (years 12-13). The school's earliest location and building(s) from the 17th century are unknown.

Young William Dyer would have begun his formal education at the Free Grammar School, but at that time, a boy had to be able to read and write before he entered the school, so there would have been home-schooling first. His father was a churchwarden, who recorded births, marriages, and deaths, and the history of the church: he was literate. Teaching little children to write their letters and numbers involved the child tracing large letters with a dry pen or chalk, then writing the figures repeatedly until they’d mastered one letter after the other.


In the sciences, Botany, Zoology, Physiology and Anatomy were differentiated and developed by classifications which marked the scientific movement away from the old Aristotelian authority in the advance towards the modern treatment. Magnetism, Mechanics, Hydrostatics, Pneumatics, Chemistry and Geology began to claim treatment separately...

Up to the end of the Commonwealth [1659], the Grammar Schools of England may be regarded as apparently exclusively classical instruction, with the exception — a most important exception — as we shall see, that under medieval Catholicism, and afterwards under 16th and 17th century Puritanism, they were, in intention and largely in practice, permeated with moral, religious, and pietistic instruction. The English grammar schools to 1660: their curriculum and practice

Writing was sometimes an extracurricular course. Grammar schools from Halifax to Southwark, Guildford to Durham, required that students speak Latin at school, not English. Schoolmasters appointed observers to enforce the practice.

The headmasters of Carre’s Free Grammar School were required to be alumni of Cambridge or Oxford University. Before 1624, when William Dyer left for his apprenticeship, the headmasters were William Etherington of Emmanuel College, Cambridge, from 1615 to 1619, when he was ordained a priest in the Church of England; and John Kitchen of Christ’s College, Cambridge, from 1619 to 1622. Kitchen was an ordained deacon, and the headmaster who followed him was ordained a priest, so religion would have been a large portion of the boys’ studies.

Outside of school terms, the young William Dyer would have done chores on the family farm, and learned to fish and hunt fowl in the fens. He would be adept at rowing and sailing shallops (shallow-draft boats). He'd play ball games, and skate on the frozen fens in winter. If his father took hay, grain, rapeseed, vegetables, or wool to market at Lincoln, Sleaford, or Boston, he’d have learned the skills of bargaining and salesmanship, and the math required for weights, measures, and monetary transactions. 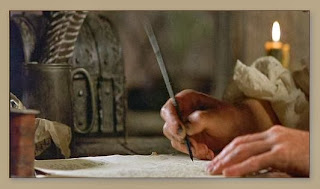 William Dyer was a lifelong learner. After his nine-year London apprenticeship and his marriage to Mary Barrett, he took the huge step of emigrating to the new Boston and was appointed as clerk to a building commission, and was a member of a trading mission to buy food from the Native Americans. Between 1639 and 1650, he was on a road-surveying and land-apportionment commission, he studied law “on the job,” and was appointed Rhode Island’s Secretary of State, Recorder, and the first Attorney General in North America. Also during that time, he was promoted to militia captain, ran his own farm, and traded or invested in the triangle of trade between England and Europe, the Caribbean, and New England. He would have learned how to navigate and sail a ship. In 1652, he was commissioned by the English Council of State as commander-in-chief-upon-the-sea and he was one of the judges of New England's first admiralty court. He was also appointed Solicitor General for Rhode Island. He was instrumental in framing the Rhode Island charter of liberties that became a model for this country’s First Amendment.

William didn’t just fall into those jobs through good looks or inherited wealth and titles. He applied himself to his studies and his work, and earned the results.

Doesn’t that make you want to put down the TV remote?

Christy K Robinson is the author of three books on William and Mary Barrett Dyer, all meticulously researched over years. Find them here: http://bit.ly/RobinsonAuthor