Where the Rhode Island Assembly met in Newport

The Rhode Island General Assembly met in homes and inns for decades before a Colony House was purpose-built for the assembly's business meetings.

During my July 2016 visit to Newport, I was treated to dinner at the White Horse Tavern by my new friends, Newport residents Paul and Valerie Debrule. The White Horse Tavern was one of the places that the Rhode Island colonial government met in the 17th and 18th centuries, and I was determined to visit the tavern because of its long-ago tie to William Dyer.

We had the latest reservations for dinner that night because I'd been speaking at the Barnes & Noble Booksellers earlier in the evening. The restaurant was packed with people when we arrived at 8:15. Except for one or two people in the bar, we were the last to leave, and the manager kindly showed me around the building. To access the upstairs dining room and bar, we climbed a very narrow circular staircase. The ladies' room, with its three tiny stalls, was smaller than you'd find in some private homes. The levels changed on the hardwood floors between the older and newer parts of the house: there was a noticeable slant down from the entry lobby to the dining room. (The newer part of the house faces the street corner in the photo here.) Because it was summer, and we were in a heat wave, there were no fires in the working fireplaces.

Though the Rhode Island Assembly, of which William Dyer was a member for many years, didn't meet at this house until some years after he died in 1677 at age 68, it's a sure thing that William would have enjoyed meals or drinks with his colleagues and friends in this building in 1673 and afterward. So would his sons and grandsons. And, as it turns out, his 9th great-granddaughter. I will testify to the mushroom appetizer and the steak frites, and conversation with friends.

From an 1897 book published by the state of Rhode Island:


The first General Assembly was held in May, 1647, at Portsmouth. On this occasion "it was voted and found that the major part of the colony were present at this assembly, whereby was full power to transact." The charter was adopted and a government formed under it. In 1648 the General Assembly met at Providence; in 1649 at Warwick; in 1650 at Newport.
The sessions of the assembly were usually limited in these early times to three or four days. The adjournments from day to day were commonly until 6 o'clock the next morning, or until half an hour or an hour after sunrise. At the meeting held in Portsmouth in June, 1655, the adjournment on the 29th of the month was "till morninge sunn an houre high and he that stays longer shall pay twelve pence." On June 29th the sun rises at 4:25 A.M., which brought the meeting of the assembly at about 5:30 in the morning.
No suitable buildings being in existence, the assembly met in public inns or at the houses of prominent persons. In May, 1676, the assembly met in Newport at the house of Capt. Morris. This was undoubtedly Capt. Richard Morris, who was often the bearer of important letters between the assembly of Connecticut and of Rhode Island. In 1676 it was voted that the assembly "sett in time of election in the kitchen of Henry Palmer's house at Newport."
At different times during the latter part of the seventeenth century, the assembly met at the house of William Mayes, innkeeper of Newport [this would be the White Horse Tavern]; of John Davis, Newport; of Col. John Low, Warwick; of John Whipple, Providence. In 1734-5 the meeting place was at the house of the Widow Drake in East Greenwich; in 1738-41 at the house of Thomas Potter in Newport. In the "last year Thomas Potter was allowed £100 for the use of his house for holding the general elections and for the meetings of the assembly and the court.”
The first Colony House was erected at Newport about 1690. It was built of wood, and occupied the site of the present State House in Newport. It was used by the General Assembly and also by the town council of Newport. In 1694-5 the Rev. Nathaniel Clapp of Dorchester occupied the Colony House for religious meetings. It caused considerable dissatisfaction and resulted in the passage of a resolution by the General Assembly on July 2. 1695, "whereas several and most of the inhabitants, freemen of this colony, are dissatisfied that the Colony House is [approved] to other uses than what it was built for; therefore upon consideration thereof, by this assembly and to settle the House for the use it was built, do hereby order and declare, that the said Colony House in Newport, shall not be [approved] for any other use than judicial and military affairs: and not for any ecclesiastical use or uses of that nature." A portion of the first Colony House about 1738 or 1739 was moved to Prison Street in Newport, where it still stands occupied as a tenement house. Another portion was removed to Broad Street, now Broadway, iu Newport, and has since been entirely demolished.
https://books.google.com/books?id=qgNLAAAAYAAJ&pg=RA4-PA13&lpg=RA4-PA13&dq=Where+did+assembly+meet+in+Newport+in+1650s?&source=bl&ots=tVeRegnbq8&sig=2PXka-PNDlWFbivhiWJyOEiZcjk&hl=en&sa=X&ved=0ahUKEwjCjqfBj7HOAhXH7SYKHTVJAQ4Q6AEILDAC#v=onepage&q=Where%20did%20assembly%20meet%20in%20Newport%20in%201650s%3F&f=false
Annual Report of the State Board of Pharmacy Made to the General Assembly. E.L. Freeman and Sons, Printers to the State: Providence, Rhode Island, 1897

The first paragraph says that the government meetings must "adjourn" (close) by an hour past sunrise. Because of the penalty for staying overtime, I take that to mean that they worked at their own business during the day and met for government business by night. Or perhaps the writer of the above report misused the word "adjourn" and meant "convene." Usually, the assembly met at least quarterly for several days, and sometimes more often.

Did you notice the final paragraph of that selection? It's another instance of Rhode Islanders believing heartily in the separation of church and state. They were upset that a minister held church services in the Colony House, and they resolved that the government building should be used only for judicial and military business. Rev. Clapp was a Congregational (Puritan) minister from Dorchester, Massachusetts who preached in Newport for 50 years. It's worth noting that even though the Puritans had cast out the original founders of Rhode Island, there were Puritan congregations meeting in peace right alongside the Episcopalians, Baptists, Quakers, Catholics, Jews, and others. As long as there was no mixture of religion and government, all was well.

Learn more about the White Horse Tavern at their website. 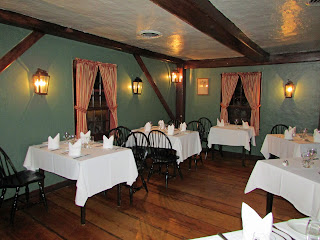