I have been researching and writing a nonfiction biography about Anne Marbury Hutchinson.  Someone who negatively reviewed one of my Dyer books complained that some of the articles were taken from this Dyer blog, which costs me thousands of hours in research and writing time, and money spent on research books--but is provided at no cost to readers. With that sort of critical attitude, I decided to remove or heavily edit some of the articles from this blog, to make my books even more exclusive than they had been. "The Great Frost" is one of those articles.

The Great Frost
excerpts from the book,
Anne Marbury Hutchinson: American Founding Mother
© 2017 by Christy K Robinson
he Great Frost of 1608 began in December 1607, when a massive freeze descended on Great Britain, Iceland, and Europe. It enveloped city and country alike, freezing animals and people, stopping trading ships, sending icebergs on the North Sea between England and the Continent, and freezing seaports so that coastal shipping trade came to a stop for three months. 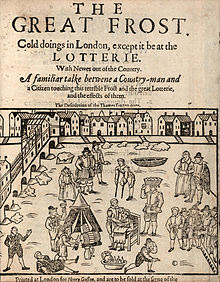