William Dyer, the son of a yeoman farmer from a village near Boston, Lincolnshire, was apprenticed as a haberdasher in London, where his guild brothers often became mayors, councilmen, or government officers. After his emigration to New England in 1635, he held a succession of appointments as surveyor, clerk, Secretary of State, and General Recorder, and was appointed the first Attorney General of Rhode Island in 1650. But as I discovered, Dyer was also the first Attorney General of any colony in North America! And wait until you read his commission. It’s brilliant. It will make you long for a return to that ideal of government today! 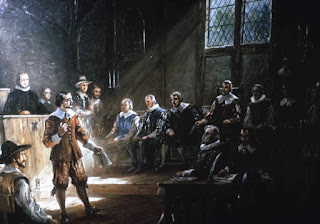 In 1628, the founders of Massachusetts Bay Colony followed the lead of the Plymouth Colony, and obtained a royal charter to form a community that was self-governed but answerable to the King, Parliament, and laws of England. The Massachusetts Bay Company purchased a huge tract of wilderness that was later subdivided to become part of New Hampshire and Connecticut.
In late 1637, a large group of religious dissidents in the Boston area, including Anne and William Hutchinson, and William and Mary Dyer, were given the choice of submitting to the Massachusetts Bay theocracy, or being banished. They may have been planning to leave anyway, but the expulsion of Anne Hutchinson for heresy certainly hurried their departure. While she was under house arrest in the winter of 1637-38, the men were searching for and purchasing land from the Narragansett Indians, for what would become the Colony of Providence Plantations and Rhode Island.
The group may have sent their belongings by ship around Cape Cod, but some of them walked out of Boston and through the Indian trails of the forest in hip-deep snow, near the time of Passover and Easter. They walked 44 miles in what must have been an impressive Exodus from Egypt.
Upon their arrival, they immediately began building a town at the top of Rhode Island, later called Portsmouth. And a year later, a group of them moved to build a town and harbor called Newport. William and Mary Dyer were co-founders.
They formed the first democracy in America—and a secular one at that— (Massachusetts governors John Winthrop and Thomas Dudley were disdainful of democracy), and obtained their own charter from the English government in 1643, after Massachusetts Bay’s Gov. Winthrop implied that Rhode Island would be annexed to Massachusetts, thus bringing the heretics back under his control.
In May 1650, the General Assembly, meeting in Newport, created the offices of Attorney General and Solicitor General. William Dyer and Hugh Bewitt/Buit, respectively, were immediately engaged.
Notice the wording in the order and commission for Attorney General below, that he was “Engaged for the people, by, or in the peoples name…”  Does that sound familiar, like, say, the Gettysburg Address by President Abraham Lincoln in 1863, when he said that “Government by the people, for the people, shall not perish from the earth”?
You won't see many “one people” or “We the People” empowering statements until 1776, in the Declaration of Independence, or 1787, when the United States Constitution was written. But Rhode Island was there in 1650, advocating for us—the People.
How wise and creative and brilliant were those Rhode Island founders?! Huzzah!

This office of Attorney General was not created for the use of oligarchs, or "the cutthroat of prosperitie" and commerce, or for preferment of the representatives and executive officers (feel free to contrast with modern government). It was for the interests of the people—of any background or social structure or financial status.

The job description promised protection from criminals, and from officers of the state. These assemblymen were not creating laws to cover their behinds, they were creating laws for transparency and accountability. It’s mind-boggling, contrasting what the United States (and its allies) have come to over the last few decades.

It is ordered by this Courte, to apoynt an Atturney Generall for the Colonie, as also a Solicitor. That the Atturney Generall shall have full power to impleade any transgression of the lawe of this State in any Courte of this State; but especially to bringe all such matters of penal lawes to tryall of the Generall Courte of Tryalls, as also for the tryall of the officers in the State at the Generall Assemblies, and to impleade in the full power and authoritie of the free people of this State, their prerogatives and liberties; and because envy, the cut throat of all prosperitie will not faile to gallop with its full careere, let the sayed Atturney be faithfully ingaged and authorized and encouraged. Engaged for the people, by, or in the peoples name, and with their full authoritie assisted; authorized, that upon information of transgressions or transgressors of the lawes, prerogatives and liberties of the people, and their penal lawes, he shall under hand and seale take forth summons from the President or Generall Assistants, to command any delinquent, or vehemently suspected of delinquencie in what kind soever accordinge to the premises, to appeare at the Generall Courte, if it be thereto belonginge, or to the Generall Assemblie in those matters proper thereunto; and if any refuse to apeare at that mandamus in the State of England’s name and the free people of this State, he shall be judged guiltie; and so proceeded with according to fine or penaltie.

Christy K Robinson has written a trilogy (two historical novels based in fact, and a nonfiction book) on Mary and William Dyer. Traditionally, Mary Dyer, who is known for giving her life in the cause of religious liberty, gets all the attention because Quaker historians used her story for political and evangelization purposes. Because he never became a Quaker, William Dyer’s history has been much more difficult to tease out of archives and records in Rhode Island, Massachusetts, and the British Library. But this English farmer's son was a foundation stone of American democracy.
Posted by Christy K Robinson