I remember once, when looking for information on how to make Anne Boleyn-style French hoods, coming upon either the blog or the website of a historical re-enactor, who took great pains to point out that she was not a costumer; she was the real deal!

But we don't all have the time and means to be the real deal and thus I proudly will admit myself to be a costumer – as long as it looks sorta, kinda correct and nobody in the general public can tell otherwise, I'm a happy camper.

Especially when I'm given less than two weeks to come up with male and female “American colonial” costumes for my twin children. Each also had to do a stand-up talk with one of those three-paneled “science fair” type cardboard displays. My daughter wanted to do a famous person, but didn't like any of the options that were available to her. (What the teacher meant by “American colonial” was Revolutionary late 18th-century, whereas Mary Dyer lived in the mid-17th century.)  Remembering Christy's research into Mary Barrett Dyer, I proposed Mary as a candidate and, after I supplied some information, my daughter's teacher agreed.

I didn't have much time and I didn't want to spend a lot of money. Basically, under such circumstances, you have three choices:
•Buy a really cheap pre-made costume at a place like Party City (cheap quality but expensive).
•Buy a pattern, fabric, and make it yourself (expensive and expensive).
•Wing it (see below).

Winging it
This can be either totally flying by the seat of your pants or by poring over numerous books on period costume that you might not have on hand (I didn't). Therefore, I went by the two images on Christy's website and decided to start with the bonnet and skirt (and maybe apron?) as shown on the Boston statue of Mary Dyer. The important thing in winging it, especially if you are not an experienced seamstress, is to 1) simplify, simplify, simplify! And, 2) use really cheap materials wherever possible.

Before trotting off to your local fabric store to find the millinery tape, which was traditionally used by haberdasheries, you should be forewarned that they probably won't know what you are talking about. That's okay; ask them to direct you to their drapery department. It's a 3” wide almost grosgrain “drapery” tape. I measured (well, actually, couldn't find my measuring tape, so I just held the tape up and around the top of her head to the desired length) the proper length of drapery tape and cut. You'll probably want to hem that edge or use one of the iron-on hemming products/anti-fray products so that the cut end doesn't fray.

Secondly, buy the cheapest (choice of color) sheet you can find at Wal-Mart or other store in a twin bed size. Cut a circular-shaped piece of the sheet such that it's a little shorter than the millinery tape piece (to get a reasonably-shaped circle, fold the sheet vertically and then again just a little bit horizontally and cut a ¼ circle). Fold under into a straight line the portion of the circle that will fit along the top/back of the millinery tape. Dashed lines represent fold lines. 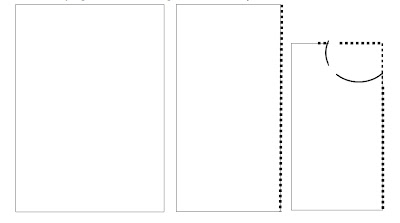 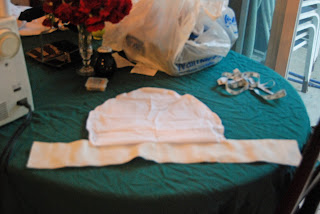 The reason for using a sheet is simple: it's about the cheapest form of fabric you can buy! This means you can afford to experiment and toss anything that doesn't work out. Even after discarding a few circles and making the apron, I had plenty of white fabric left over. This coif/bonnet simply involved measuring lengths and circle sizes, cutting them and sewing them. Easy-peasy!
Skirt Materials & Construction
•Twin sheet of desired skirt (and blouse) color
•Elastic ribbon or banding.
•Iron-on hem product and/or Fray Check
•Set of hemostats OR a large, well-made safety pin. Mary Dyer would call it a "bodkin."
Here is where the additional benefits of using sheets really kicks in. The first reason I gave was that it is about the cheapest fabric you can buy. Now, let's imagine that, somehow, in a mysterious parallel universe, you could afford to buy fabric the size of a twin sheet for the same amount of money as buying the sheet. Yes, but... that same piece of fabric would have two selvage edges (which wouldn't need to be hemmed and two cut edges, which would need to be hemmed. With a sheet, you have four hemmed edges! Cuts down your work considerably, especially in making the skirt and apron. 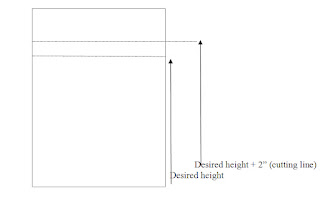 For the skirt, measure how long you'd like for the skirt to be, then add 2” or so and cut that sheet horizontally at that mark.  If you use the entire width of the sheet, you now have a hemmed bottom and two hemmed sides!

Now you need to make an upper-casing along the cut line. The purpose of the casing – which is essentially a hemmed-off channel at the top of the skirt – is to carry the elastic ribbon which will make the skirt puffy and easy to pull on over the hips. The casing is the reason for adding the extra 2” at the top of the skirt. You have three options here: FrayCheck the rough top edge, then fold over by an inch and hem; Fold under the rough edge by 1/8” and then by nearly an inch and hem; Hem the 1/8 edge, fold again by about an inch and hem. Remember that “hemming” means using either a StitchWitchery-type of product OR sewing. Stretch the elastic tape a bit to a comfortable size for the wearer of the costume and cut that amount.

Now sew the two side edges together up to the line of the casing hem. Attach either the hemostats OR the safety pin to one end of the elastic tape/ribbon and gradually begin inserting it int one end of the casing.  Don't allow the other end to be drawn into the casing! Stretch it and gather the casing until both ends exit just beyond the casing's sides. Here you can either sew them together or tie them shut. Now you can stitch shut the two ends of the casing, hiding the elastic inside of them.

Congratulations! You now have a skirt! Do likewise for the apron (for which I used my white sheet instead of the gray that I used for the skirt), only make the casing a separate sewn rectangle and, pinning right side to right side (with wrong side facing the sewer), sew the separate “casing” which we will now call an “apron string” and use it to tie the apron around the waist.

My sewing machine died before I could make a blouse out of the matching gray colored sheet (regrettably, only after I'd freehanded the blouse pattern), so I went with one of Sophie's white cotton karate gi tops. You can see the final results below:


_______________
Judy Perry is a university educator in computer science, and is author of a blog on Katherine Swynford. She and her family live in southern California.
_______________Thank you, Judy, for documenting your DIY project on Mary Dyer, and sharing your resourcefulness with desperate moms everywhere, trying to come up with a project for their children!