The estimated walk time from Providence to Boston would take 14 hours, but these days, the road is paved and level; in Mary Dyer's time it would have been uphill and downhill, over streams or low, wet places, with gullies eroded after strong storms. The English colonists and farmers were not on the best of terms with Native Americans. There were bounties on wolves. Cougars and bears lived in the forest. Mary had walked it before in company of protective men, but on the last two occasions, she had only the company of sisters Mary Scott (age 17) in 1659 and Patience Scott (age 12) in 1660.

The road between Boston and Providence, Rhode Island, was a familiar one to William and Mary Dyer. When it was hardly more than an Indian path through the forests and streams of Massachusetts, William had been part of the scouting parties which purchased Rhode Island from the Narragansett Indians. 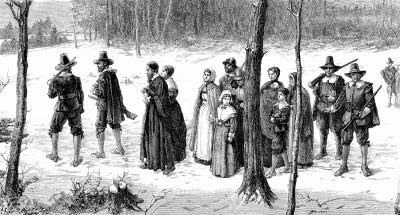 Then in the snowy spring of 1638, he and Mary elected to walk the path with the Hutchinson party after their expulsion from Massachusetts. They probably shipped their possessions around Cape Cod, but walked away like the Bible’s children of Israel, as a symbolic exodus from the heavy, theocratic hand of the Massachusetts Bay authorities.

The road would have been enlarged by commercial traffic and military expeditions during the late 1630s and early 1640s. William Dyer, as a Rhode Island government official and an attorney, would have traveled the road back to Boston many times. We don’t know if Mary accompanied him, because the next record we have of Mary is that she arrived by ship at Boston in March 1657 and was imprisoned as a Quaker.

William took Mary back to Newport, via the road to Providence, in summer 1657. But between 1658 and 1659, she’d made the trip from Providence to Boston several times with other Quakers, each time to support the imprisoned or call for their release. She was herself arrested several times, and was sentenced to be hanged on October 27, 1659. However, she was reprieved and was supposed to go home to Newport, Rhode Island.

She did, but not for long. (Her husband William said the next spring that the last time he saw his wife was in November.) About two weeks later, she’s mentioned as being in Plymouth Colony’s town of Sandwich, visiting the Quakers there. She was jailed and released.

She must have traveled from Sandwich to the Sylvester home on Shelter Island (eastern reaches of Long Island). There, she spent the winter in the company of her Friends, some of whom had been severely persecuted in Boston. In May 1660, Mary sailed across Long Island Sound, eastward to Narragansett Bay. Not stopping at her home in Newport, where resided her husband and children, she continued up the estuary and Seekonk River to Providence. Richard and Katherine (Marbury) Scott were co-founders of Providence, and were undoubtedly friends of many years—since at least 1635 when the Scotts, Hutchinsons, and Dyers lived in Boston. Katherine was Anne Marbury Hutchinson’s youngest sister, and was about a year older than Mary. Richard became a Quaker on a 1654 trip to England, which would make him the first Quaker in New England, if not America. His conversion predated the arrival of Quaker missionaries in 1656 and 1657. So the Scott home in Providence would have been the hub for Mary’s and other Quakers’ forays into Massachusetts.

Mary could have used her husband’s horses or rented a ride for herself and Patience Scott. But I believe this walk was symbolic of her first forced march out of Boston, with the Hutchinsons. She walked out then, and now she was walking back to prove they’d not been able to beat her down. This was on her terms.

Mary Dyer and Patience Scott (12-year-old daughter of the Scotts, and niece of Anne Hutchinson) arrived in Boston on May 21, 1660, having walked from Providence, Rhode Island. Patience had walked this road several times, too, and had been jailed in Boston the summer before for preaching Quaker beliefs.

Mary and Patience arrived during the annual proceedings of the Massachusetts Bay Court, when the Governor, deputy governors, and other officials would be in Boston for annual elections, to hear superior court cases, and vote legislation based on their blend of religious and civil law. John Endecott had been reelected governor on May 20, and at his home in Salem that night, there had been a terrific thunderstorm for six hours, from 9pm to 3am. The lightning was so severe and long-lasting that it was recorded in the Salem annals. Mary and Patience were probably spending the night in the forest or countryside outside Boston's peninsula, and might have been subjected to similar weather.

On the morning of May 21, Mary Dyer and her Quaker Friends from Salem and Plymouth gathered in Boston to protest the extreme persecution of Quakers, knowing full well that they would be jailed, probably beaten, and in Mary's case, executed (June 1, 1660). To enter Boston, Mary would have walked past the gallows at the fortification on Boston Neck.

As suggested by the Google map, a direct hiking route from Providence to Boston would be about 44 miles. I don’t know if this is the route Mary’s road would have taken—over the course of decades and centuries, roads don’t really move or change, they just enlarge or maybe straighten a bit. I imagine that the U.S. 1 and Interstate-95 corridors had their origins on the old Indian footpath, the most direct and easy route, that became a wagon road, then was paved, and at last became a turnpike. The path plotted on Google runs that corridor. When I drove that route, I noticed how hilly the terrain was, and the numerous "road cuts" where the hills were cut down and leveled for the freeway. Mary's path may have meandered a bit more, following contours of the land.

Mary thought, on her last two journeys, that she was going to her death. She must have had faith that she was protected by God while on his errands through a wilderness that was both spiritual and physical.

And remembering the Ginger Rogers quip about dancing backwards and in heels, Mary did it in long skirts, carrying a pack of supplies for sleeping and eating on the journey. Surely there was plenty of time over the two to four days they were walking, for communion with God and each other. Mary’s next walk would be from the prison to the gallows on Boston Neck.

If it were you, would you make the long, hard walk of 44 miles, or would you take an alternate mode suggested by Google? They suggest public transit. Now, where's the public demonstration or the civil disobedience in that??

Christy K Robinson is author of two biographical novels on William and Mary Dyer, and a collection of her nonfiction research on the Dyers. In 1660, Mary Dyer was hanged for her civil disobedience over religious freedom, and her husband’s and friends’ efforts in that human right became a model for the United States Constitution’s Bill of Rights 130 years later. The books (and Kindle versions) are available on Amazon. CLICK http://bit.ly/RobinsonAuthor for the lbooks.
And if you'd like to own or give an art-quality print of Mary Dyer's handwriting, her letter to the General Court of Massachusetts, CLICK HERE.