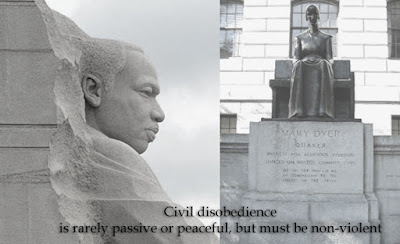 The Calvinist Puritans of colonial America believed that one could never know if God would award salvation and eternal life. They obeyed the Old Testament biblical and civil laws scrupulously, and performed good works in the hope that God would find them worthy; and they took comfort from their difficult task. They believed that God had a body of people who he’d predestined for eternal life. They called themselves the Elect, or the Remnant, after the proportionately-small group of faithful believers mentioned in the Book of Revelation.

Mary Dyer, who had rejected that dogma with her adherence to the teachings on grace of Anne Marbury Hutchinson, became a Quaker in the 1650s. That sect believed that with the New Covenant that came with Christ on the cross, God would replace the laws written on stone (the Ten Commandments) with a God-given conscience that told one what was right and wrong. They believed that eternal life was a gift to any person who trusted God (that he loved his children and desired their salvation) and obeyed the conscience. Mary went to her death on the gallows with perfect confidence that her next breath would be drawn in heaven.

For the persecuting Puritans of colonial Boston and Plymouth, the Quaker loosie-goosie feel-good religion that went straight from believer to God and back, instead of through the deliberative filter of church and state, was a clear threat to their authority and would result in chaos and anarchy. They’d also lose their royal charter, life savings, tithes and taxes, political power, and personal investments in the colony if a royal governor were sent. They wanted those Quakers rooted out and kept out.

William Robinson, Marmaduke Stephenson, Mary Dyer, and many other early Quaker converts were given a choice to leave the colony and live, or stay and be brutally beaten and probably executed. Most of us today would think there’s no contest about what to do. But the Quakers believed that God had specifically commanded and placed them there, and they were happy about it! Rather than avoid trouble, they took a lot of effort to stir up the people to anger against their government—anger that would change laws and bring justice, mercy, righteousness, and liberty to their colony.

What Robinson, Stephenson, and Dyer saw in their minds’ eyes was that long-range goal, and they were not only willing, but joyful, at their selection and assignment to do God’s will.

October 1659 execution date (from which Mary was reprieved)
Mary’s letter to the General Court: ‘Therefore I leave these lines with you, appealing to the faithful and true witness of God, which is one in all consciences, before whom we must all appear; with whom I shall eternally rest, in everlasting joy and peace, whether you will hear or refuse. With him is my reward, with whom to live is my joy, and to die is my gain.”

Governor John Endecott of Massachusetts Bay Colony said, 'Take her away, marshal.' To which she returned, 'Yes, joyfully I go.' And in her going to the prison, she often uttered speeches of praise to the Lord; being full of joy.

The marshal asked Mary, "Are you not ashamed to walk thus between two young men?" "No,” answered Mary Dyer, "this is to me an hour of the greatest joy I ever had in this world. No ear can hear, no tongue can utter, and no heart can understand, the sweet incomes and the refreshments of the Spirit of the Lord, which I now feel."

June 1, 1660 march from prison to gallows:
When offered her life if she would voluntarily leave the colony forever, Mary Dyer said no, “For in obedience to the will of the Lord I came, and in His will I abide, faithful unto death."
Someone from the crowd called out, "Did you say you have been in Paradise?"
Mary answered, "Yea, I have been in Paradise several days and now I am about to enter eternal happiness."

Dr. Martin Luther King, Jr., martyr for civil rights, in a speech just before his assassination. 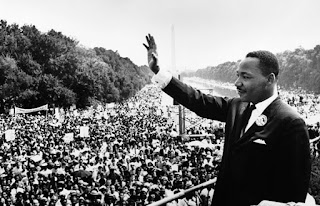 “Well, I don't know what will happen now. We've got some difficult days ahead. But it really doesn't matter with me now, because I've been to the mountaintop. And I don't mind. Like anybody, I would like to live a long life. Longevity has its place. But I'm not concerned about that now. I just want to do God's will. And He's allowed me to go up to the mountain. And I've looked over. And I've seen the Promised Land. I may not get there with you. But I want you to know tonight, that we, as a people, will get to the promised land!”

For the Quaker martyrs and for Martin Luther King, Jr., civil disobedience was not a matter of merely protesting the existence of the government, or making a public statement of rebellion against government authority. It was a matter of obeying the higher authority, God, and the conscience (God's "voice" in your soul), while addressing the injustices of human beings viciously persecuted for their religious beliefs, or their right to exist as equal under God.

*****
For information on the June 1, 1660 death of Mary Barrett Dyer, Englishwoman and colonial American, read the following links already posted in this blog.
Top 10 things you may not know about Mary Dyer
Mary Dyer: The establishment versus the individual
Mary Dyer and freedom of conscience
Mary Dyer and the First Amendment
Mary Dyer, pioneer of civil disobedience