The Dyers’ 1635 voyage from England to New England

and the Great August Hurricane

Autumn 1635—William and Mary Dyer boarded an English ship with their Westminster neighbors, perhaps 100 other passengers, and sailed to new Boston, Massachusetts Bay Colony. No one knows the name of the ship or the exact date they arrived, but it probably arrived before one of the terrible winters of the Little Ice Age. Ship passages took an average of eight weeks if the winds were favorable, and up to twelve weeks if not.

The strongest hurricane ever to come ashore in New England made landfall in mid-August 1635, between Connecticut and Cape Cod, with massive 20-foot storm surges and winds that knocked down thousands of trees. Modern meteorologists estimate sustained winds of 135mph, from the descriptions of damages. Depending on which calendar historians used, Julian (old style) or Gregorian (new style, which we use now), the date for the hurricane is as early as August 13 or as late as August 26. Either way, the damage to shorelines and forest was still visible for many years.

Some historians have said that the eye of the storm passed between Boston and Plymouth; others have said that it came north from Narragansett Bay (Rhode Island). Native Americans in Narragansett Bay climbed high into trees to keep from being swept away by the waves. Gov. William Bradford of Plymouth Colony wrote, “Diverce vessels were lost at sea, and many more were in extreme danger… It caused ye sea to swell about 20 foote, right up & downe, and made many of the Indeans to clime into trees for their safetie.” 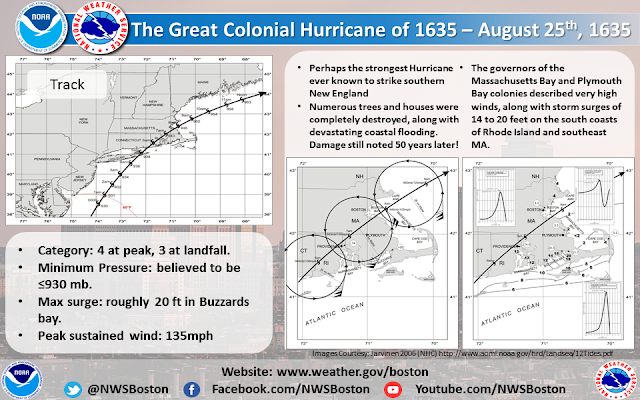 US National Weather Service Boston MA A study was conducted using more modern numerical models. When the impacts within the models approximated the reported impacts from the historical records, the track, wind and pressure information was taken directly from the model. It's the best we can get. More information about how this study was conducted can be found at https://www.aoml.noaa.gov/hrd/Landsea/12Tides.pdf
The 400-ton Great Hope, a ship full of passengers and their possessions, was just sailing into Massachusetts Bay when the gale struck them. They were driven aground near Charlestown, but when the wind shifted, they were blown back out on the Bay, and with the storm surge, pushed back aground at Charlestown. Those people survived, but a small pinnace broke up at Marblehead, and two families were washed away. On the pinnace, only Mr. and Mrs. Thacher survived, injured, but they lost all their children and goods.

Imagine leaving your home country, and being in sight of the shore of the Promised Land--and losing your entire family.

An English passenger ship, James, full of new immigrants (including my ancestors Hannah and John Ayers), nearly foundered as they came south along the New England coast, making for Boston.
Rev. Increase Mather wrote, "At this moment,... their lives were given up for lost; but then, in an instant of time, God turned the wind about, which carried them from the rocks of death before their eyes. ...her sails rent in sunder, and split in pieces, as if they had been rotten ragges..."

Wikipedia: They tried to stand down during the storm just outside the Isles of Shoals, but lost all three anchors, as no canvas or rope would hold, but on Aug 13, 1635, torn to pieces, and not one death, all one hundred plus passengers of the James managed to make it to Boston Harbor.

There would have been search and rescue parties looking for survivors up and down the coast and small islands. I haven't found records of salvage operations, but the colonists were fully aware of their rights to salvage wreckage and possessions lost in shipwrecks. 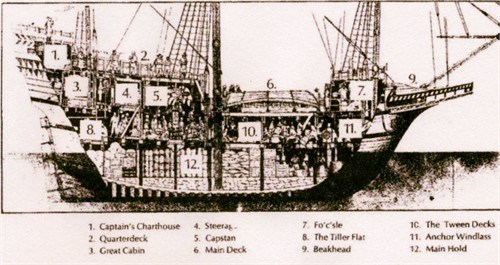 Were the Dyers at sea in that prime time to arrive in Boston? Had they come earlier in the year and were they building their house in Boston? We don't know. But their son Samuel was born in the autumn or early winter, and was baptized by John Wilson of Boston First Church in December 1635. In a time when the Massachusetts churches were not hasty at adding members, the Dyers had been accepted.

Some of my research indicated that Puritans leaving England at that time had to swear loyalty to the King (the Dyers were royalists, so no problem there) and pay a large tax (or bribe) to be permitted to leave the country, so there’s speculation that some emigrants sneaked out on trading ships by way of Barbados and the Caribbean, and then up to Boston, which might be why not every emigrant shows up in passenger lists.

Ships rarely traveled alone. For armed protection from pirates, and to share resources (like physician or midwife), or if another ship needed repairs, they traveled in convoy. The ships carried not only the colonists and their many children, but their servants, the materials and tools the colonists needed to build homes, some livestock, seeds, furnishings, enough food for 18 months, clothing, guns and powder, and goods they couldn’t get or make in the wilderness of the New World. Privacy might have consisted of sheets hung from ropes. Imagine being heavily pregnant or giving birth in a 300-400-ton ship rolling around in the Atlantic Ocean in hurricane season. I’ve not seen a description of hygiene, but imagine that some passengers were seasick, others had diarrhea, there was animal waste, and children in nappies. Probably pregnant women and gassy men whose diet consisted of legumes and salted fish or meat. Although they could wash themselves with basins and towels, there weren't tubs or showers.

For John Winthrop's account of his fleet's 1630 arrival in New England, see  http://marybarrettdyer.blogspot.com/2014/06/winthrop-fleet-fights-its-way-to-new.html

The Memoir of Captain Roger Clapp said that on board the ships, there were two sermons every day of the 70 days they were upon the deep. From the other paragraphs of his memoir, Capt. Clapp (my uncle about 14 generations back), describes this intensely religious sequestering as joyful and grace-filled, nothing like we’d consider with dread. He wrote of the frights and starvation of landing in Dorchester and trying to survive the polar vortexes of the Massachusetts winter, but Capt. Clapp was a silver-linings man of deep faith.
“For was it not a wondrous work of God, to put it into the hearts of so many worthies to agree together, when times were so bad in England that they could not worship God after the due manner prescribed in his most holy word, but they must be imprisoned, excommunicated, etc., I say that so many should agree to make unto our sovereign lord the King to grant them and such as they should approve of, a Patent of a tract of land in this remote wilderness, a place not inhabited but by the barbarous nations? And was it not a wondrous good hand of God to incline the heart of our King freely to grant it, with all the privileges which the Patent [Massachusetts Bay Colony charter] expresseth? And what a wondrous work of God was it, to stir up such worthies to undertake such a difficult work, as to remove themselves and their wives and children from their native country, and to leave their gallant situations there, to come into this wilderness to set up the pure worship of God here — men fit for government in the magistracy and in families, and sound, learned, godly men for the ministry, and others that were very precious men and women, who came in the year 1630.”

If the Dyers and other early colonists were anything like Capt. Clapp, they took their difficult experiences as a challenge and necessary discipline as God’s chosen people, building the New Jerusalem society.