“An authoritative and careful biography of Mary Dyer and her husband, William, which breaks new ground, dispels common beliefs, and balances both the Quaker and puritan sides of the story.”
—H. Larry Ingle, author of First Among Friends: George Fox and the Creation of Quakerism

“A well-researched and balanced work that makes a valuable contribution to our understanding of the people and issues of the seventeenth-century Atlantic world.”
—Francis Bremer, author of John Winthrop: American’s Forgotten Founding Father

Mary Dyer is widely esteemed as one of the “Boston martyrs”— four Quakers hanged by the Massachusetts Bay Colony between 1659 and 1661. When she returned to Boston in 1660, after having been banished twice from Massachusetts, she committed an act of deliberate civil disobedience that cost her her life, led to the downfall of the puritan government, and advanced the fundamental principles of freedom of conscience and expression.

More than three-and-a-half centuries later, the state continues to exercise its mandate to preserve the peace and social order, while also protecting the constitutional exercise of free speech and self-expression. The challenge, always, has been to identify and then enforce the balance between the rights of individuals or groups to practice their beliefs, and the rights of others to likewise enjoy their liberties. The story of the Dyers—especially Mary’s story—is how that challenge played out between the New England puritans and the Quakers, and how her life and death shaped the outcome of that conflict. 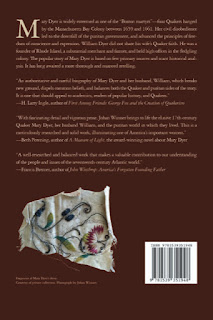 *****
Johan Winsser is a former college professor, telecommunications engineer, and competitive runner. He is the author of several academic articles related to Mary Dyer and early New England, and now pursues his interests as an independent scholar. He lives with his family in the Northwest Hills of Connecticut.  For more information, visit http://www.dyerfarm.com .
Posted by Christy K Robinson