Forcing is not freedom 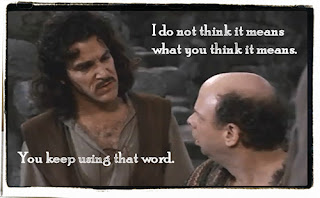 In the more than 20 years I've been researching and writing about Anne Hutchinson and Mary Dyer and their relation to religious liberty, my published articles have often received comments saying, essentially, "Pish-posh! Judeo-Christian beliefs form the basis of American life."


With various politicians, attorneys, and religious leaders preaching the glories of a "Christian nation," our Constitutional right to worship or not, free of government interference, is under attack.

The first thing the CofE/Puritan colonies did was establish a theocratic government which determined every facet of the colonials' lives. People were flogged, hanged, tortured, banished, enslaved, etc., because of these religious governments.

Massachusetts Bay Colony was founded as a theocracy. Men who were church members were a rigorously tested, tithe-paying member of the Puritan church. If they were church members, they might be eligible to be freemen, which gave them privileges in business, and required them to serve on juries and assemblies, and vote.

Magistrates and officials were often ordained ministers. They formed the core of the theocracy. And they hanged adulterers, thieves, Quakers, and witches. They treated Baptists and fornicators in the same way: they beat them to a pulp. Catholics were not allowed. They enslaved Native Americans because they were pagan.

Rhode Island, founded by Roger Williams and the Anne Hutchinson party (including William and Mary Dyer), was established between 1636 and 1638 as a SECULAR DEMOCRACY, that is, a non-religious “body politick” governed by the People. The 1663 Rhode Island charter, similar to a constitution, was written by John Clarke, Roger Williams--and probably also William Dyer, who was the first attorney general in North America, including Canada and the Spanish and French colonies. William Dyer was far more than just a "courier" who brought the ratified charters back from England in the 1640s, 1650s, and 1663. William had lost his friend Anne Hutchinson and his beloved wife Mary to theocratic persecution and execution, so he had a huge stake in the outcome of religious liberty in New England.

All civil states, with their officers of justice, in their respective constitutions and administrations, are proved essentially civil, and therefore not judges, governors, or defenders of the spiritual, or Christian, state and worship. — Roger Williams

The Puritan theocracies of New England in the 1600s demanded that all freemen (voters, jurors, etc.) take an oath of allegiance to their colony. But the Quakers, starting in the late 1650s, refused to take any oath because the Bible (same Bible the Puritans used) said to let their yes be yes, and no be no, and not swear by anything on the earth or in heaven. (In other words, be so upright, trustworthy, and honorable a person that your word stands for something.) So the Puritans fined them heavily, and confiscated their stock, crops, and lands. They also severely whipped the Quakers for not swearing the oath. The Puritans held this oath ceremony repeatedly through the year, so as to maximize their penalty fines. Then they awarded each other large land grants in compensation for their government service. Here's a specific case I wrote about: http://marybarrettdyer.blogspot.com/2012/06/grandparents-in-law-quaker-connection.html

Fast-forward to New Jersey in 1720, where a Welsh Baptist minister, Nathaniel Jenkins, was a colleague of Obadiah Holmes Jr. of Newport, whose father had been flogged by the Boston theocracy in the early 1650s. Rev. Jenkins stood up in the New Jersey assembly (the legislature) and spoke eloquently on religious liberty when he persuaded them to quash a bill that would punish Unitarians (who believed in one God) for not believing in the Trinity of Father, Son, and Holy Spirit. Jenkins was a Trinitarian, by the way. He would not countenance persecution of anyone based on their religious beliefs.

Fast-forward again to the writing and ratifying of the United States Constitution and its Bill of Rights (including the First Amendment). The "founders" of the United States, who wrote the Constitution and Bill of Rights, were the great-grandchildren of that very persecution. Only three or four generations away, and they knew their history intimately. They knew what religion does when married to government, and they took steps to keep them separate. They were men of high moral character who governed in a secular framework.

The Constitution is a completely secular document. It's not a religious document. The Founders knew intimately what religion mixed with government was currently doing in Europe, and what it had done to their great-grandparents of the 17th-century American colonies, and their great-great grandparents in England. That First Amendment was modeled on some Virginia legislation, and upon the 1663 Rhode Island charter.

The United States were not founded as a Judeo-Christian society. (Jews were safe in Newport, Rhode Island because of their charter allowing religious liberty, but not in other colonies.) The United States government was founded by Christians, agnostics, and Deists, who believed in a god or supernatural creator, but didn't necessarily believe that Jesus was God himself. 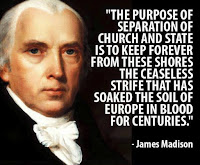 Six years after the Constitution was written, the young nation made a treaty with Tripoli.

"Art. 11. As the Government of the United States of America is not, in any sense, founded on the Christian religion; as it has in itself no character of enmity against the laws, religion, or tranquility, of Mussulmen (Muslims); and as the said States never entered into any war or act of hostility against any Mahometan (Mohammedan) nation, it is declared by the parties that no pretext arising from religious opinions shall ever produce an interruption of the harmony existing between the two countries." Source: Treaty of Tripoli, 1797

The use of this term [Judeo-Christian], which conveniently dismissed American anti-Semitism as foreign, exploded in the 1940s, appearing in thousands of essays, books, and speeches. As Americans mobilized against “totalitarian” Germany and Japan, and later the “godless” Soviet Union, appeals to Judeo-Christianity allowed Americans to define the United States as uniquely committed to human dignity and the virtuous defender of religious pluralism. Dwight Eisenhower famously proclaimed in 1953 that “our form of government” was rooted “in the Judeo-Christian concept.” ...
Conservatives, in response, doubled down on their insistence that the United States was an inherently religious nation and appealed to Judeo-Christianity to challenge taxation and abortion. American values, wrote Secretary of Defense Elliot Richardson in 1973, called for Judeo-Christian charity, not “big government.” By the 1980s, the term encapsulated the right’s powerful cocktail of white resentment, sexism, and anti-welfare rage. Judeo-Christianity, writers implied, was more than a specific variation of American evangelism; rather, it was a timeless tradition whose defense necessitated opposition to affirmative action, equality for women and sexual minorities, and redistributionist policies. ...
Hardly a practicing Christian, [white nationalist Steve] Bannon has often claimed that societies’ strengths lay in their ethnic homogeneity. This is why, he argues, nationalists must smash the power of “globalism,” epitomized by international organizations, finance, and migration. For Bannon, however, this nationalist revolution also has a geopolitical aspect, best captured through a religious terminology. The white nations, he explained in a recent interview, constitute the “Judeo-Christian West,” which should to come together with Russia to defeat their Muslim and Chinese opponents. Indeed, Judeo-Christianity has been a long-standing obsession for Bannon.
Source: The New Republic, November 2019

Though I'm an advocate of religious liberty and separation of church and state like my ancestors on both sides of my family, I am a practicing Christian, and have been all my life. It's not just a label. It's what I do. I volunteer with groups that serve the homeless, the immigrants, the hungry, and those who need medical assistance. I'm also a church musician for numerous churches and fellowships over five decades. I attended Christian schools. I've worked for religious nonprofits as an employee or a contractor. I will tell you from long experience that separation of church and state strengthens faith-based organizations.
America was founded by moral, high-minded people who had their own religious traditions, but didn't insert the spiritual realm into the documents upon which our rule of law and our culture depend.

Forcing is the opposite of freedom. 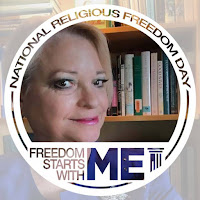