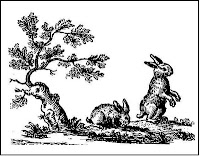 What did 17th-century colonists eat? Pretty much anything! All of New England was in a building boom for years as immigrants arrived in the thousands. They often participated in house and building raisings, enjoyed the fellowship and feats of strength and skill, and what you'd call a "potluck." Some years, because of the Little Ice Age, bird or insect plagues, and poor farming practices (like growing tobacco instead of food), there were periods of scarce rations followed by disease epidemics.

If you were to try cooking the dishes suggested in cookbooks of the time, you'd find no precise measurements, but the ingredients are very generous to feed large families and the servants or slaves (yes, New England had Indian and African slaves very early on). By today's standards, many dishes would be considered heart-stoppers. The recipe for roast turkey or capon, particularly, calls for three major applications of butter! Many people never lived to see 50 years of age, even with active lives of outdoor work and traveling on foot. 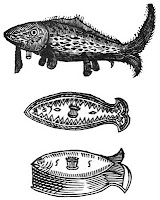 At home, when it was just the family and servants, most colonists had porridge, bread, and a little meat when the family could afford it. But for feasts and social occasions, they ate well. Their festival foods were served at Sabbath meals, thanksgiving feasts throughout the year, or house raisings. 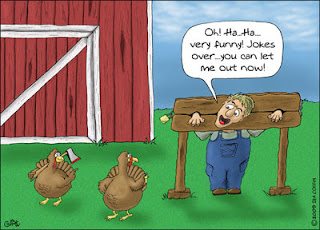 Meats: They made roasts and pies of venison, a variety of fish and shellfish, mutton, turkey, capon, swine, pheasant, pigeon, rabbit, squirrel, raccoon (as delicious as a lamb, said one author), porcupine, bear, duck, geese, moose, and other game. They loved to eat beef, being English after all, but in the first years, cattle were expensive to import and precious for breeding. At the November slaughters, there was very little waste left, since homemakers used fat, bone marrow, intestines, and boiled the meat off bones. The less-desirable meat parts were minced and mixed for sausages, which were smoked and could last for months in winter. Many of the by-products were used for soap, candles, buttons, combs, tools, and other household items. Turkey, goose, duck, and other native birds were hunted relentlessly in the first few decades of colonial settlement.

Beverages: everyone drank beer or ale, even children, as they deemed it more healthful than water. They also had wines, soft and hard cider, and after about 1660, tea. Drunkenness was a crime and a sin, so they were moderate in their drinking.

Dairy products: Cheese would have been a regular feature of their diet, especially for lunches out in the fields, when traveling, or hunting. See below for the best way to make cheesecake (mmm!). Eggs were used in many recipes for sweet and savory dishes. Butter was used in marinating, frying, cooking, baking, basting the roast, spread on bread or patties... Children drank buttermilk and goats-milk. Cream made many vegetable stews a rich mortar to our ancestors' arterial walls. 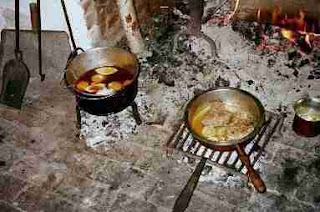 Recipes below are from the 1615 New Book of Cookerie, a popular book in England, and almost certainly used in New England. In addition to these English favorites, they would have learned to prepare corn meal mush patties, dry venison, and pemmican (meat and berries or grains processed together and dried). The recipes are copied out of the recipe books as they were written, so you won't find exact proportions. The recipe writers probably assumed that there were several experienced cooks in the kitchen, who shared experience. 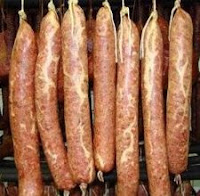 A Cambridge Pudding
Force grated Bread through a Cullinder, mince it with Flower, minst Dates, Currins, Nutmeg, Sinamon, and Pepper, minst Suit [suet], new Milke warme, fine Sugar, and Egges: take away some of their whites, worke all together. Take halfe the Pudding on the one side, and the other on the other side, and make it round like a loafe. Then take Butter, and put it in the middest of the Pudding, and the other halfe aloft. Let your liquour boyle, and throw your Pudding in, being tyed in a faire cloth: when it is boyled enough cut it in the middest, and so serve it in.

To sowce [pickle, souse] a Pigge
Scald a large Pigge, cut off his head and slit him in the middest, and take out his bones, and wash him in two or three warme waters. Then collar him up like Brawne [boar], and sowe the collars in a fayre cloth. Then boyle them very tender in faire water, then take them up and throw them in fayre water and Salt untill they be colde, for that will make the skinne white. Then take a pottle of the same water, that the Pigge was boyled in, and a pottle of white Wine, a race of Ginger sliced, a couple of Nutmegs quartered, a spoonefull of whole Pepper, five or sixe Bay leaves: seeth all this together, when it is colde put your Pigge into the sowce-drincke, so you may keepe it halfe a yeere, but spend the head.

A made Dish of Sheepes tongues
Boyle them tender, and slice them in thinne slices: then season them with Sinamon, Ginger, and a little Pepper, and put them into a Coffin of fine Paste, with sweet Butter, and a few sweet Hearbes, chopt fine. Bake them in an Oven. Then take a little Nutmeg, Vinegar, Butter, Sugar, the yolke of a new laid Egge, one spoonfull of Sacke, and the juyce of a Lemon: Boyle all these together on a chafing-dish of Coales, and put it into your Pye: shog it well together, and serve it to the Table.

To bake a Turkey, or a Capon
Bone the Turkey, but not the Capon: parboyle them, & sticke cloves in their breasts: Lard them and season them well with Pepper and Salt, and put them in a deepe Coffin with the breast downeward, and store of Butter. When it is bakte poure in more butter, and when it is colde stop the venthole with more Butter.

Pottage
To boyle yong Peason or Beanes: First shale them and seethe them in faire water, then take them out of the water and put them into boyling milk, then take the yolks of Egs with crums of bread, and ginger, and straine them thorow a strainer with the said milk, then take chopped parcely, Saffron and Salt, and serve it for Pottage.

Spinach Pottage
Take nothing but the Heart, or Soundest Part of the Spinage; mince it fine, and stew it in a Pipkin with Pease-soop, an onion stuck with Cloves, and other Seasoning Ingredients. Set your Crusts a soaking, scrape in some Parmesan, and dress your Pottage. Garnish it with Sticks of Cinnamon roundabout, and lay one in the middle, o’er fry'd Bread or an Onion. (The Queen's Closet Opened, by W. M, the Cook to Queen Henrietta Maria, 1655.)

A Fridayes Pye, without eyther Flesh or Fish
Wash greene Beetes cleane, picke out the middle string, and chop them small with two or three well relisht ripe Apples. Season it with Pepper, Salt, and Ginger: then take a good handfull of Razins of the Sunne, and put all in a Coffin of fine Paste, with a piece of sweet Butter, and so bake it: but before you serve it in, cut it up, and wring in the juyce of an Orenge, and Sugar.

To make Cheese-Cakes, the best way
Take two Gallons of New Milk, put into them two spoonfuls and a half of Runnet, heat the Milk little less than Blood-warm, cover it close with a Cloath, till you see the Cheese be gathered, then with a scumming-dish gently take out the whey, when you have dreyn'd the Curd as clean as you can, put it into a Siev, and let it drain very well there; then to two quarts of Curds, take a quart of thick Cream, a pound of Sweet Butter, twelve Eggs, a pound and half of Currans, a penny-worth of Cloves, Nutmeg and Mace beaten, half a pound of good Sugar, a quarter of a pint of Rose-water; mingle it well together, and put it into Puff-paste.