© Christy K. Robinson
Massachusetts Bay Colony Governors John Winthrop and Thomas Dudley were not close friends (in fact, they were rather miffed at one another on several occasions), but they were fathers-in-law, co-investors in the MassBay Company, and brothers in the faith. Despite their differences of opinion in government matters (Winthrop was lenient on his erring friend Roger Williams and Dudley wanted Williams exiled even in harsh midwinter), it was their practice to stay professional, work together, and present a unified front.

So imagine their surprise when cocky, 24-year-old Henry Vane called a meeting on January 18, 1636, about the “reconciliation” of Winthrop and Dudley. Among the citizens, factions were forming for Winthrop and Dudley, said Vane. He was a new arrival to Boston in 1635, and came with family wealth and royal court connections. He was popular with the people of Boston and the magistrates hoped for Vane’s brilliant career in colonial government.

Those present at the meeting were Governor John Haynes, Reverends John Cotton, John Wilson, Thomas Hooker, and Hugh Peter, as well as Winthrop and Dudley, of course.

“Vane declared the occasion of this meeting,” wrote Winthrop in his Journal:  “A more firm and friendly uniting of minds, etc., especially of the said Mr. Dudley and Mr. Winthrop, as those upon whom the weight of the affairs did lie, and therefore desired all present to take up a resolution to deal freely and openly with the parties, and they each with other, that nothing might be left in their breasts, which might break out to any jar or difference hereafter.”

After hearing Vane’s concern about the lack of hugs, affectionate glances, Saturday barbecues, and warm fuzzies, Winthrop and Dudley protested (politely and wordily) that they’d reconciled and healed their differences long ago, and that they were “brothers,” and if people complained, that was their problem. Surely these fiftyish men with dignitas were annoyed at being called out to a “come to Jesus meeting” by a meddling twenty-something newcomer. And seriously, wasn’t there some real business to conduct?

Governor Haynes requested that the ministers confer and create a rule, and that they all should meet the next day. The conclusions of the ministers were that
(As for the Massachusetts Bay governors’ council and their resolution for charity and professional comportment at the conclusion of Henry Vane’s warm-fuzzy meeting, in the autumn of 1637, when these magistrates and ministers were trying Anne Hutchinson for heresy, they made personal attacks on her, and showed open contempt and disdain. Their emotions ran so high that they seemed to forget the rules of conduct laid out and agreed to in 1635. When Hutchinson desired to know how she deserved the banishment sentence, John Winthrop snapped, “Say no more! The court knows whereof and is satisfied.”)

It’s quite possible that Henry Vane was already well-acquainted with William Dyer and his former master, Walter Blackborne, both of whom had lived near the Thames in Westminster and were taxed in the same parish (St. Martin-in-the-Fields) as Henry’s father had been. Vane and Dyer, who were about four years apart in age, were admitted to freeman status (voters and members of the church and community) at the same time.

When Henry Vane first arrived in Boston, he was admired for his Puritan fervor, his government connections in England, and his family’s money (rich people were obviously blessed by God). His father, Henry Vane the Elder, who was an Anglican, had given his eldest son and heir leave to spend three years in New England, and it seemed Henry was actually headed to Connecticut, but Boston caught him and there he stayed. John Winthrop was peeved at Henry’s flamboyance with his apparel and his attendants (what you might call a posse).

Soon, Henry became a supporter of Anne Hutchinson and her teachings, along with the Dyers and many other men and women of Boston, and that really infuriated Winthrop. Henry, a single man, lived in the very nice home of Rev. John Cotton, one of the "stars" in the Boston firmament, and many of the Hutchinson teaching sessions revolved around the sermons of her mentor of 20 years, Rev. Cotton. Henry was in the very heart of the biggest thing to come down the turnpike—except that the Massachusetts Turnpike wouldn't be built for 320 years!

In May 1636, the young Henry Vane was elected governor of Massachusetts Bay and directed a military action against the Pequot natives; within seven months, he attempted resignation in tears, but was urged to complete his year’s term. In March 1637, he and scores of other men signed a Remonstrance against the governors’ council in their heavy handling of the Wheelwright controversy, and that was called sedition by that council (the council retaliated in November of that year). In May 1637, he was replaced as governor by John Winthrop’s reelection.

Henry Vane may have been planning to lead a group of investors and important members of Boston, to a new “plantation” in Rhode Island. Members of the Wheelwright faction, who had signed the Remonstrance, were dissatisfied with the politics and governance of John Winthrop and the deputy governors and ministers, and were planning a move as early as the summer of 1637, before Anne Hutchinson’s first trial for heresy, and her exile from Massachusetts. Losing these men’s business skills and financial assets would be an economic setback to Boston, and they’d be too far away for the magistrates and ministers to control. The renegades were talking with Roger Williams and the Narragansett Indians about purchasing Aquidneck Island—which they did in the early winter of 1638 when it was obvious that Anne Hutchinson and her adherents were being banished, and they were forced to accelerate their plans.

But Henry abruptly sailed back to England in August 1637, a year early. The same month, the Bay's ministers held a convocation to affirm their belief in salvation (only for the Elect or predestined) confirmed by keeping the Sinai Laws, and decry the Hutchinson teaching of salvation by faith in the grace of God, apart from the law. At the meeting, they set a November date for Anne Hutchinson's heresy trial.

Henry Vane took up naval administration with favorable professional advancement courtesy of his powerful father. By 1640, he was knighted, married to the daughter of Parliament’s treasurer, and started a large brood of children. As a Puritan, he supported the Parliamentary cause in the English Civil War of the 1640s, and was appointed Treasurer of the Navy. He continued to have an important, respected role in Great Britain's relations with its American colonies.

When Mary Dyer gave birth to her seventh child in 1648, the baby was named Henry—almost certainly in honor of Sir Henry Vane. (Her eighth child, born in 1650, was named after King Charles I, who had been executed the year before.)

During the 1650s, Vane was at times the head of the English government, when the council presidency rotated around to him. In 1652, he (as one of the Council of State) commissioned William Dyer as Admiral in the Anglo-Dutch war. Vane retired to Raby Castle in County Durham (which his father had bought from the Crown in 1626), with his wife and large family, and wrote several books that would be criticized for their liberality of thought, especially as regarded liberty of conscience.

When Mary Dyer spent nearly five years in England, from 1652 to 1657, it may be that she enjoyed the hospitality and protection of Henry and Frances Vane at times, even as many Quakers were being beaten and imprisoned around the country. Imagine the spirited discussions they would have held regarding liberty of conscience, grace and works, and the inspiration of what many at the time called "Inner Light." A historian wrote that Henry "presented himself as a 'witness' of light." (Perhaps that was Mary's influence!) In fact, Quaker founder George Fox met with the Vanes at Raby Castle (see photo) in 1657, after Mary had departed for America in January. When Fox and Vane could not agree on theology, Fox remarked later that Vane was "vaine & high & proude & conceited."

Henry fell out with Oliver Cromwell, the Lord Protector of the realm, and was arrested and imprisoned regarding his publications. He was released to home, and arrested again, spending some “quality time” in Carisbrooke Castle prison where the high-status political prisoners were held. In 1662, he was politically betrayed and beheaded for treason on June 14. He'd done no wrong, but the new king, Charles II, was told that Vane was too dangerous to keep alive. (Similar to modern corporations which sweep out the long-term administrators and employees for new bosses to bring in a new "team.")
Samuel Pepys attended Henry Vane’s execution and recorded these lines in his journal:

He made a long speech, many times interrupted by the Sheriff and others there; and they would have taken his paper out of his hand, but he would not let it go. But they caused all the books of those that writ after him to be given the Sheriff; and the trumpets were brought under the scaffold that he might not be heard. Then he prayed, and so fitted himself, and received the blow; but the scaffold was so crowded that we could not see it done....He had a blister, or issue, upon his neck, which he desired them not hurt: he changed not his colour or speech to the last, but died justifying himself and the cause he had stood for; and spoke very confidently of his being presently at the right hand of Christ; and in all things appeared the most resolved man that ever died in that manner, and showed more of heat than cowardize, but yet with all humility and gravity. One asked him why he did not pray for the King. He answered, "Nay," says he, "you shall see I can pray for the King: I pray God bless him!" 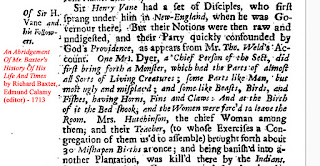 You may have read in genealogy or wiki pages on the internet that Henry Vane the Younger was the father of Mary Dyer's "monster" anencephalic baby, and/or of Anne Hutchinson's molar pregnancy. That rumor started decades after the tragic pregnancies, some years after Vane's execution to cast judgment and vitriol on three people who were considered religious heretics. There is NO foundation to that lie.

For more information about the career of Henry Vane the Younger, who is the ancestor of Raby Castle's current owner, Henry Vane Lord Barnard, click HERE.
Posted by Christy K Robinson